Advertisement
Home / India / No distance, even 1 metre, too far for a drink

No distance, even 1 metre, too far for a drink 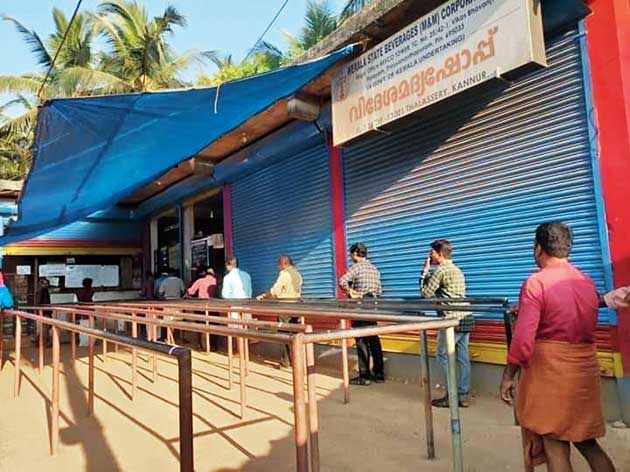 The latest coronavirus protocol in Kerala: Stand one metre apart in the liquor queues.

The state government has acknowledged that it cannot afford to deny itself a substantial chunk of its revenues or the drinkers their daily swig.

It has therefore laid down that the customers must keep a distance of one metre between one another and that not more than 30 people would be allowed in a queue at any given time. The protocol came into effect from Wednesday.

“This is a government decision to contain the spread of the coronavirus,” the managing director of the Kerala State Beverages Corporation, G. Sparjan Kumar, told The Telegraph.

An image of people queuing outside a retail outlet in Thalassery, Kannur district, has been widely circulated on social media and suggests the buyers are meticulously maintaining the one-metre discipline.

Regular queue at a liquor shop in Kerala.
(Sourced by Correspondent)

Kumar said that liquor buyers in Kerala have always been known for their strict observance of etiquette, with hardly anyone trying to jump the queue.

One reason for that may be the 30-people-at-a-time rule, which too is being strictly adhered to, Kumar said. On a usual working day, the queues used to be 50 to 100 metres long at certain hours, even with people standing very close. They were longer before holidays.

However, Kumar confirmed that the sales were “stable” — that is, there was no obvious sign of a decline even with fewer people lining up a time. Sources suggested that in all likelihood, many among the customers were buying for several people at a time to lower the risk of infection and facilitate compliance with the new protocol.

Kerala’s decision to keep the liquor vends open stands in sharp contrast with its prompt closure of other public places like parks, cinemas and educational institutions and restrictions on religious festivals and weddings.

While the most obvious reason is that shutting the outlets would hurt the government’s coffers, another is that it could lead to hooch taking the place of legal spirits and posing a big health risk.

Kerala, home to one of India’s bigger liquor markets, earned revenues of Rs 14,505.67 crore from Indian-made foreign liquor and beer in the financial year 2018-2019.

Malayalees guzzled IMFL and beer worth Rs 487 crore during the last eight days of the 10-day Onam festival in September 2019.

Kumar said the new regulations had been implemented at all the 301 liquor retail outlets run by his corporation. The 570 private bars too have been asked to ensure there’s no crowding.

The previous government, headed by Congress chief minister Oommen Chandy, had severely restricted liquor sales and cut down the number of bars with the objective of achieving total prohibition in a few years. But the Left government restored the liquor business after coming to power in May 2016.

The effort to keep the liquor stores open with the one-metre protocol has not amused the Opposition.

“There should be no more delay in closing the beverages outlets and bars,” the leader of the Opposition, Congress veteran Ramesh Chennithala, wrote in a Facebook post.

“The coming days are crucial to stopping the spread,” he added, citing reports that “these outlets don’t follow any safety guidelines”.