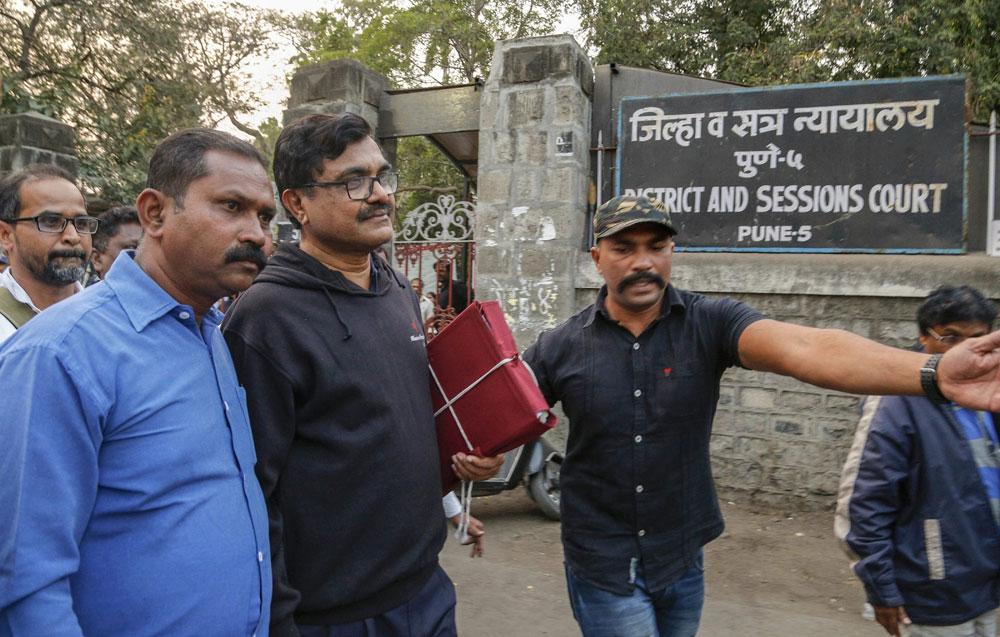 Pune police told Bombay High Court on Tuesday that they would not arrest activist Anand Teltumbde till February 12 midnight, even as the Dalit scholar termed the case a ploy to “humiliate” and “harass” him.

The statement was made by Maharashtra government counsel Aruna Pai on behalf of the police before a bench of Justice N.W. Sambre. The court was hearing an application filed by Teltumbde seeking anticipatory bail in the Elgar Parishad-Bhima Koregaon case.

Teltumbde is an accused in the case, which was filed following violent clashes at Bhima Koregaon near Pune on January 1, 2018. He was booked for several charges, including sections of the Unlawful Activities Prevention Act (UAPA).

Justice Sambre on Tuesday directed Pai to give an oral undertaking as a pre-condition for securing time to file an affidavit opposing Teltumbde’s plea. The court said it would hear the plea on February 11.

Teltumbde later termed the police case against him and several other social activists “harassment” and a ploy to “humiliate” them.

“The police do not want to investigate the case... they just want to harass and humiliate us. I have been cooperating with the investigation since long. I don’t understand why this sudden move to arrest me,” he told reporters in Mumbai.

Teltumbde was arrested last week after a Pune court rejected his pre-arrest bail plea. He was, however, ordered to be released a day later, on February 2, following a court order. He approached the high court on Monday seeking anticipatory bail and said he had no role in the case.

When the plea was heard on Tuesday by Justice Sambre, advocate Pai sought for it to be dismissed on the ground that UAPA Section 43D(4) bars granting anticipatory bail to an accused. Pai also pointed out that earlier last year, Teltumbde, who the police claim has Maoist links, had filed another plea in the high court denying all charges against him and appealing that the FIR against him be quashed. However, another bench had rejected the plea.

“The HC bench rejected the plea after analysing all evidence against him. That, too, should be a valid ground to dismiss the anticipatory bail application,” Pai said.

Teltumbde’s counsel Mihir Desai said the law provided for anticipatory bail even under the UAPA in “exceptional cases”. Pai asked the court to grant her time to put her arguments on an affidavit.

Teltumbde had been arrested from Mumbai airport last Saturday around 3am.

His arrest had been deemed illegal by a sessions court and he was released from custody.

Teltumbde was booked following an Elgar Parishad event on December 31, 2017, which, the police alleged, triggered violent clashes the next day at Bhima Koregaon village in Pune district in which one person was killed. According to the police, the event had been funded and supported by Maoists.

The Mumbai-based rights body Mumbai Rises to Save Democracy (MRSD) held a news conference in Mumbai on Tuesday said the government had started a witch-hunt against rights activists to divert attention from the role of the Hindutva organisations and their leaders.

“The continued arrests, harassment and threats to the activists is unlawful and an attempt to vilify the rights movement. This is a concerted effort to stifle the voices of dissent and threaten democracy,” said journalist P. Sainath.

The MRSD has demanded the prosecution of Hindutva leaders Sambhaji Bhide and Eknath Bote, accused in the Bhima Koregaon violence.

On February 7 rights bodies will hold a public meeting in Pune. The meeting, named A Step of Fearlessness: Against the Undeclared Emergency, will oppose the arrests of activists in the Bhima Koregaon case.