Congress workers impatient for a fight 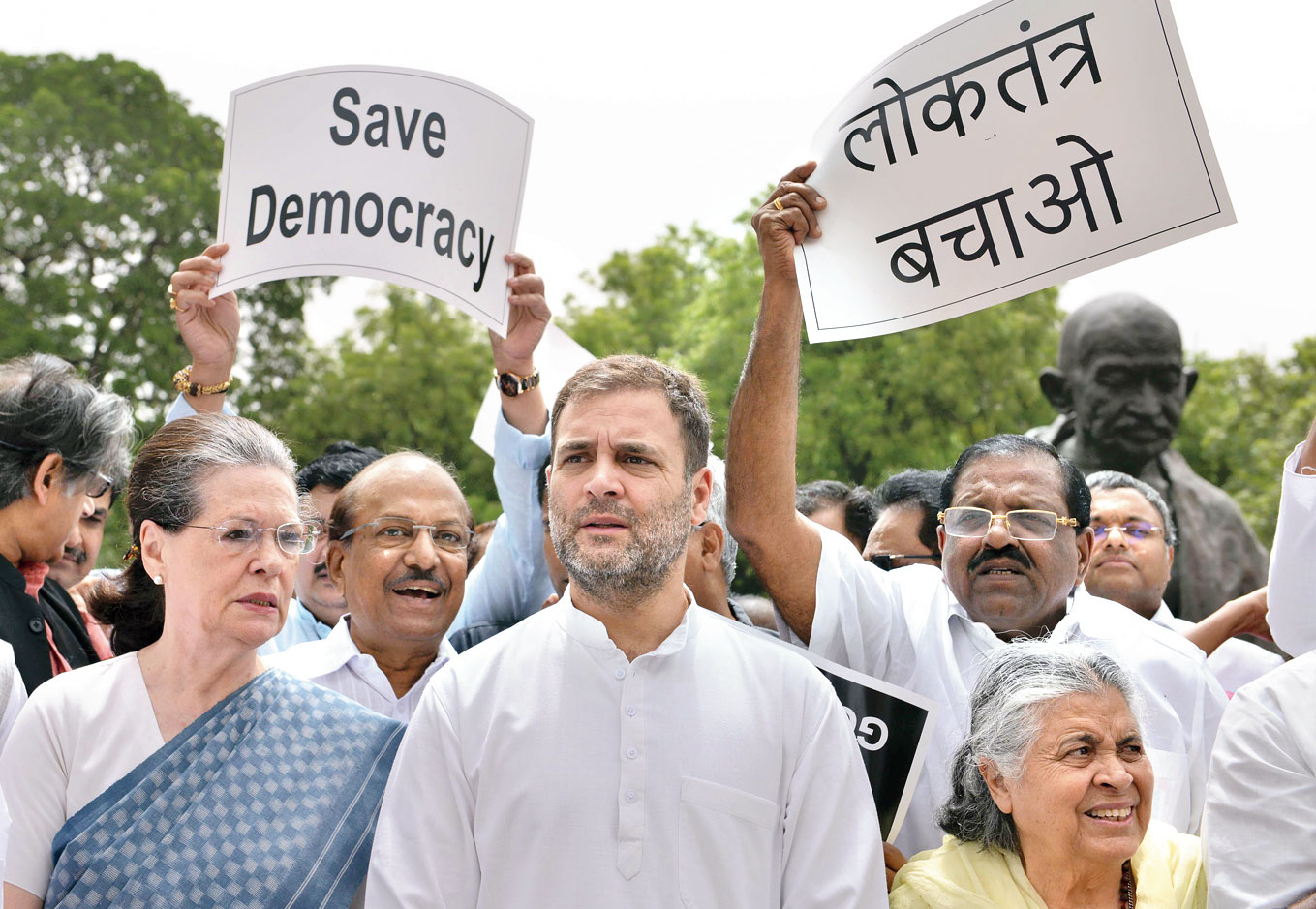 Sonia Gandhi and Rahul along with members of other Opposition parties at the protest on the Parliament campus on Thursday.
Picture by Prem Singh
Sanjay K. Jha   |   New Delhi   |   Published 12.07.19, 02:06 AM

Defections in Goa and Karnataka, which followed a similar exodus of legislators in Telangana, have created panic stations in the Congress and the majority of party workers feel the crisis will deepen unless the leadership vacuum is addressed soon and a sense of purpose restored.

Amid growing despair among the rank and file, senior leaders privately admit that the political void has persisted for too long. It is a month and a half since Rahul Gandhi told the party he was stepping down as president, and no replacement has been found yet.

Sources said Sonia Gandhi was entreated to step in as interim president and steer the ship out of turbulence but she expressed her reluctance. Rahul’s insistence that the new president must be from outside his family could have influenced her decision.

The party’s top leaders, under the guidance of A.K. Antony and Ahmed Patel, are likely to take a few days more to evolve a consensus on a name. So far, there is no agreement even on the nature of Rahul’s replacement.

While some want a young and dynamic president, the majority favour an experienced leader who could also steamroll divergent views on the strength of seniority. Region and language might play a role, with most leaders saying a Hindu from the Hindi heartland should be picked to effectively counter the RSS.

“The nature of the rival is a critical factor; the prime objective of checking the RSS must be kept in mind,” a senior leader told The Telegraph.

The sight of a meek protest on Thursday on the Parliament campus, where Sonia and Rahul were present along with members of other Opposition parties, did not pacify the workers outside who felt that waving “Save Democracy” placards was almost an advertisement of surrender.

An AICC member from Bihar said: “What will the ordinary worker do if the leadership has disappeared after this massive defeat? The leadership should have stood firm and motivated us. The BJP will do what it can but we have no doubt our own party is in a self-destructive mode. Defections and toppling game are not new but the will to fight back is missing. That’s the real crisis. Even state leadership has vanished.”

A Delhi leader said: “We should probe why the MLAs and MPs run away or sell themselves. While lack of caring and motivating leadership is doubtless a factor, the party gives tickets to moneyed people instead of loyal workers. In some cases, they say resourceful candidates have greater winnability, in others the party or its functionaries want to make money. Such candidates are bound to fall for allurements. The leadership should ponder over this fundamental issue.”

Workers and middle-rung leaders fiercely debated the party’s future; the demoralisation is so deep that few demonstrate the will to sustain the struggle for five years more.

Senior leaders, however, insist this is a transition phase and the mood will change once the fightback begins. “These defections and exodus are more or less normal. If we win one state election, morale will get a boost. We have seen such times in the past. But the leadership structure has to be put in place at the earliest and a political action plan needs to be rolled out,” a key strategist said.

The Congress is grappling with defections now in a few states, but even in the past state governments have faced threats to survival after dramatic results at the Centre.

Post-Emergency, the Janata Party swept to power at the Centre in 1977 and straightaway dismissed nine Congress-led governments in the states. The reason given was: the mandate in the parliamentary election shows that these governments had lost the people’s support.

Indira Gandhi returned the compliment after coming to power in 1980 by dismissing nine state governments led by Opposition parties.

Congress leaders argue that the BJP has been more brazen than anyone could imagine. Senior leader Ghulam Nabi Azad recently pointed to the case of Arunachal Pradesh where the government was stolen lock, stock and barrel.

“Instead of the Assembly, the meeting took place in a hotel where the deputy Speaker was elected,” Azad recalled, explaining how the BJP had subverted the people’s mandate in several states.

The irony is that the Congress workers themselves are not satisfied with these arguments and strongly feel that the struggle on the ground is missing. They loved the sight of senior Karnataka minister D.K Shivakumar protesting on the street in Mumbai, and want Rahul, Priyanka Gandhi and all other senior leaders to fight it out on the streets for the next five years.