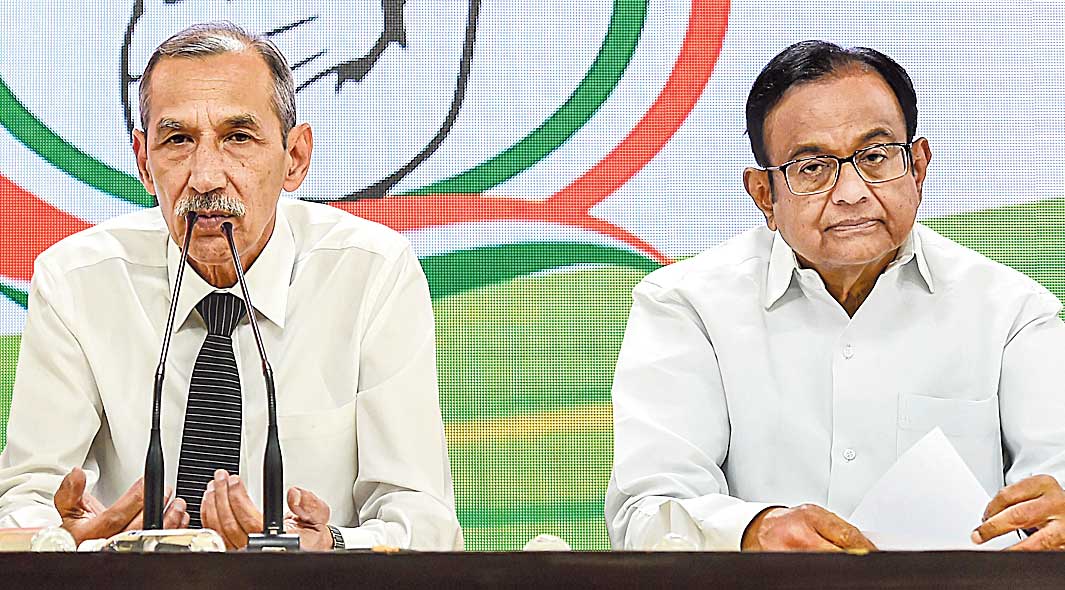 The Congress on Sunday formally adopted a holistic security vision document that aims to protect the nation as well as citizens from multi-dimensional threats and coercion.

The document, prepared by a task force headed by Lt Gen. (retired) D.S. Hooda, popularly known as the surgical strike hero, deals not only with external military threat and transnational terrorism but also with internal strife, Left-wing extremism and militancy, threats to data and privacy of citizens along with other concerns like economic, environmental and climate change.

The report was released on Sunday by senior party leaders P. Chidambaram and Jairam Ramesh and Gen. Hooda himself.

Hooda headed the Northern Command of the Indian Army when the much-publicised surgical strike took place across the border in September 2016.

The Congress stressed the need for a comprehensive review of the security paradigm and promised urgent measures to strengthen the security apparatus, military capability, gathering of intelligence and cyber safety.

“This is more relevant today than ever before as the last five years have witnessed an alarming erosion in our military capabilities and defence preparedness, even as political rhetoric on national security has scaled new heights,” the report said.

The BJP has been citing the Balakot air strikes to canvass votes while Uttar Pradesh chief minister Yogi Adityanath had referred to the armed forces as “Modiji ki sena”.

The report pointed out that the defence budget had reached a 57-year low in 2019 in terms of percentage of the GDP and suggests the absence of critical initiatives to enhance capabilities coupled with short-sighted diplomacy had severely compromised national security.

It gives a detailed roadmap, saying: “To secure land & maritime borders, we will adopt the principle of ‘one border, one force’, put in place a ‘smart fence’ on the Myanmar border that combines technology with a physical barrier, operationalise a ‘Comprehensive Integrated Border Management System’ across all Indian borders, speed up infrastructure development across the border, set up a ‘National Maritime Authority’ to remove jurisdiction issues in coastal security.”

On strengthening military capability, the report talks about transforming the ministry of defence into a fully integrated headquarters. “A chief of defence staff (CDS) will be immediately appointed as the principal adviser to the government on matters relating to defence. Together, the integrated MoD and the CDS will oversee and coordinate the force modernisation plans of the military focussed on increasing interoperability, enhancing jointness, and optimising the resources between the three services.”

It adds: “We will provide a statutory basis to the National Security Council (NSC) and the office of (the) national security adviser (NSA). Their powers and functions will be defined under the law and both authorities, and the agencies under them will be accountable to Parliament. Undertake a comprehensive review of the current and future force structures to transform the army, navy and air force into an integrated fighting force. Replace the current system of ad-hoc budgetary allocation by one where budgets are based on a long-term capability development plan prepared by the three services and defence experts.”

The report acknowledges the vitality of intelligence and proposes a career intelligence cadre with qualifications in the subject and regional expertise, proven language capability and familiarity with local customs.

It also suggests drawing of personnel with tested acumen for intelligence work from the broadest spectrum of society, including the civil services, the armed forces, technology experts and economists. The Defence Cyber Agency will be upgraded to a full-fledged cyber command.