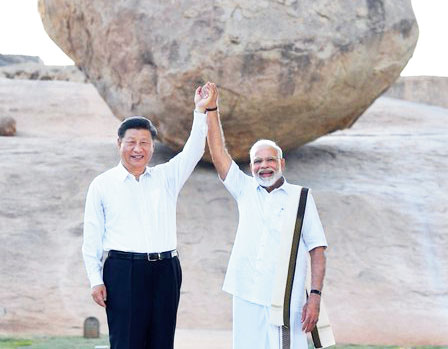 The Congress, which has questioned the government’s refusal to apprise the nation about the situation on the border, has asked how the standoff happened when Prime Minister Narendra Modi had invested so heavily in the relationship with China.

Asked about the message, former Union minister Anand Sharma, who heads the Congress’s foreign affairs department, told The Telegraph: “It is indisputable that the Prime Minister invested heavily in the relationship with China over the last six years, right from the hospitality given to (President) Xi Jinping on the Sabarmati riverfront in Ahmedabad in 2014 to the two informal summits Modi held with him. Why is that bonhomie not reflected in the developments at the border?”

Sharma added: “We have always pointed out that diplomacy needs gravitas and substance. Handshakes, hugs and photo opportunities don’t define relations. The relationship with China is complex and India has to move cautiously with strategic vision. While the territorial integrity of the country is non-negotiable, all we are asking at the moment is that the government take the Opposition into confidence. The Prime Minister is silent. Call Parliament, the government is accountable to Parliament.”

Nehru had called a Parliament session on the demand of a young Vajpayee when China had attacked India in 1962 and heard out the Opposition, which criticised his government.

The BJP, which used to fiercely grill the Manmohan Singh government on foreign affairs, is now trying to brand anybody who asks questions on China as irresponsible.

Modi has visited China five times as Prime Minister. He went first in May 2015 on a State visit; his second trip in 2016 was to attend the G20 summit; he went again in 2017 and 2018 for the Brics and SCO summits. What generated much curiosity is Modi’s two-day informal summit with Xi in Wuhan in April 2018, which no Indian Prime Minister had done before. Modi had held an informal non-State summit with Russian President Vladimir Putin as well in May 2019.

The “Wuhan spirit” was supposed to have repaired the strain in the relationship caused by the Doklam standoff, and yet another informal summit in Tamil Nadu’s Mahabalipuram in October 2019 between Modi and Xi was projected to have placed the China-India ties on a much higher pedestal. This was viewed as the culmination of a process that Modi had described in 2014 as “Inch towards Miles” just before the visit of the Chinese President to India.

Congress leader Patel said in another tweet on Saturday: “Inch to Miles, was it for the border or for diplomatic relations?”

Modi had said: “Inch is India-China. And Miles — Millennium of Exceptional Synergy.”Of his four visits to China as chief minister, one had drawn much attention as he had gone on the invite of the Communist Party of China and was given a high-profile reception. The BJP too seemed to have abandoned its traditional hostility towards China and toed the Modi line to sustain a long-term relationship.

Ahead of Xi’s Chennai visit in 2019, a high-level BJP delegation went to China on a week-long trip for what was described as creating “party-to-party links” with the Chinese Communist Party.

In April 2018, RSS ideologue and BJP veteran Ram Madhav was quoted by news agency PTI as saying: “The way in which the interactions have happened in the past two days (between Modi and Xi) shows that the purpose for which the meeting was planned has been accomplished. Greater bonhomie, greater effort at mutual understanding and greater rapport between the leaders have been achieved.”

That spirit is certainly not in tune with the “boycott-Chinese” call given by the RSS-BJP ecosystem.

Sharma, the Congress leader, pointed to this dichotomy, saying: “We also want a peaceful and mature relationship with China. But Modi needed to speak with clarity within the RSS and the BJP and explain to them what kind of relationship he wanted with China. There is an element of duplicity as the RSS-BJP wants to sustain hostility towards China in the national discourse.”

While there is a perpetual “boycott China” call coexists, the trade partnership is growing every year. The Modi government had planned to celebrate the 70th anniversary of the establishment of India-China ties throughout 2020, which got disrupted by the pandemic that ironically originated in Wuhan.