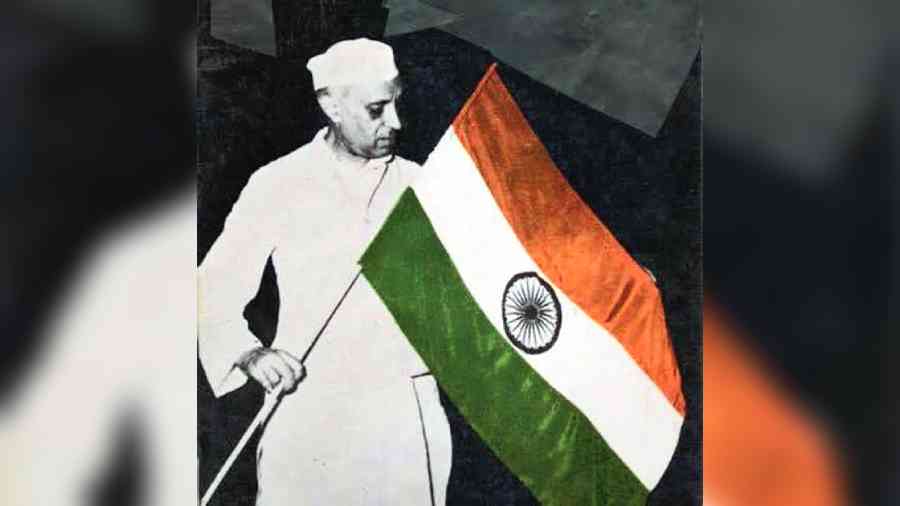 The Congress on Wednesday threw a seemingly simple challenge to the BJP: Show us one photograph of your icon V.D. Savarkar or any of your other role models from that era with India’s national flag.

The dare was prompted by the BJP’s questioning of the photograph the Congress had chosen for its social media accounts in response to Prime Minister Narendra Modi’s appeal to people to use the Tricolour as their display picture from August 2 to 15.

Senior RSS leaders such as organisation chief Mohan Bhagwat and Dattatreya Hosabale had not responded to the Prime Minister’s appeal till Wednesday evening, lending weight to the Congress’s insinuation.

BJP spokesperson Sambit Patra accused the Congress of dragging dynasty and politics into everything.

“It is not that a leader from only one family can hold the national flag. The Tiranga is for everybody. Rahul Gandhi could have allowed party workers to promote the Tiranga with their own photographs,” Patra said.

Congress social media head Supriya Shrinate responded on Twitter: “Nehru gave the call for Poorna Swaraj (full independence). He hoisted the Tricolour first in 1929. Spent nearly 10 years in jail during freedom struggle. Was independent India’s first PM. We are putting Nehru with Tiranga. Can BJP put Savarkar or any of their other leaders with (the Tricolour)?”

The photograph the Congress has used has historical value since it shows Nehru holding the Tricolour on August 15, 1947, the day India became independent.

Modi, his cabinet colleagues, BJP chief ministers and many other party leaders have changed their display pictures to the Tricolour. Some RSS functionaries such as Suresh Soni, Krishna Gopal and Ram Madhav too have done so.

But like Bhagwat and Hosabale, frontal outfits of the RSS such as the VHP, Bajrang Dal and the ABVP too had disregarded Modi’s request till Wednesday evening.

Congress communications chief Jairam Ramesh took a dig at the RSS, saying: “It seems the Prime Minister’s message hasn’t reached his own family (Sangh parivar) which didn’t hoist the national flag for 52 years at their Nagpur headquarters. Will they listen to the Prime Minister?”

Congress spokespersons Pawan Khera and Shrinate and Youth Congress chief B.V. Srinivas too taunted the RSS, asking it to at least adopt the Tricolour now.

The RSS has historically opposed the Tricolour in favour of the Bhagwa Dhwaj (saffron flag). It had refused to hoist the Tricolour at its Nagpur headquarters for over half a century.

When the Congress sounded the call for Poorna Swaraj at its Lahore session in December 1929 and hoisted the Tricolour for the first time, it had appealed to all Indians to repeat the act on January 26, 1930.

But then RSS chief K.B. Hedgewar instructed the organisation’s members to ignore the appeal and continue to worship the saffron flag. His successor, M.S. Golwalkar, said that only the Bhagwa Dhwaj represented Indian culture.

On the eve of Independence, August 14, 1947, RSS-sympathetic Organiser had said: “Even as the people who are in power today because of fate thrust the Tricolour in our hands, Hindus will neither respect it, nor accept it. The number three in itself is inauspicious. A flag with three colours will be harmful for the nation and cause negative psychological impact upon the citizens.”

Although the RSS doesn’t explicitly oppose the Tricolour now, a controversy had erupted recently when Karnataka minister and senior BJP leader K.S. Eshwarappa said the “saffron flag” could one day become the national flag.

However, none of this has deterred the BJP from attacking political rivals for their alleged disrespect of the Tricolour.

It has criticised the Congress and other Opposition parties for staying away from the Red Fort-to-Vijay Chowk Tiranga Motorcycle Yatra on Wednesday morning.

Parliamentarians and other politicians from the BJP participated in the event, organised by the Union culture ministry and flagged off by Vice-President M. Venkaiah Naidu.

Patra said it was painful when even the Tiranga was politicised, apparently oblivious of the history of his party’s ideological parent.

He repeated Modi’s appeal to citizens, saying: “Listen to the voice of your conscience. Every heart will say, ‘Let’s hoist the Tricolour’. This is not a party’s programme. This is the desire of the nation. The flag is the national symbol, which has to be respected.”