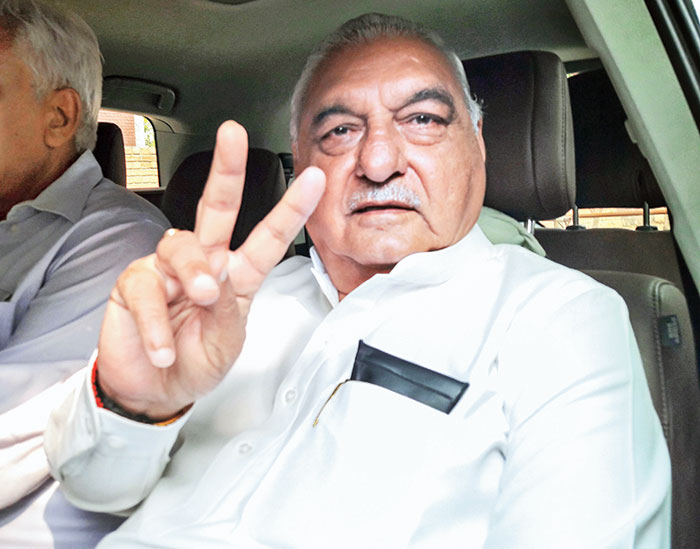 The Congress is projecting the Haryana poll verdict as rejection of the BJP government and has appealed to all like-minded parties and legislators to form a coalition.

Prime Minister Narendra Modi, however, has declared that the return of the Manoharlal Khattar government is a foregone conclusion.

While Khattar has decided to stake claim despite being six short of a majority, senior Congress leader and former chief minister Bhupinder Singh Hooda has asked all the non-BJP legislators to unite. He has said the spirit of the mandate is “change”.

Congress spokesperson Anand Sharma echoed him in Delhi, arguing that the BJP had lost its moral right to rule Haryana, having been reduced to 40 seats after having led from 79 of the 90 seats in the general election six months ago.

The Congress has won 31 seats and the Jannayak Janta Party 10.

“They (the BJP) set themselves a target of crossing 75, but they lost a lot of ground in such a short period after the parliamentary elections. This is a defeat (for them),” Sharma said.

“The BJP is changing the lexicon of defeat and victory. We don’t agree with the BJP’s assessment of victory in Haryana. What they campaigned for has been rejected. Khattar has no moral right to continue in office. All the elected MLAs (of non-BJP parties) should listen to the call given by Hooda to form a government.”

The Congress, however, is not very hopeful of forming a government, with senior leaders conceding that the BJP was much better placed to manage the numbers.

They fear that JJP leader Dushyant Chautala might be arm-twisted into extending support to the BJP, which is in a position to form the government even with the support of the seven Independent winners alone. Hooda’s own pessimism was evident in his reported offer of the chief minister’s post to the JJP.

Sources close to Hooda privately rued that he had been given the reins for the electioneering too late and got barely 15 days to run a full-fledged campaign. They blame the party high command’s delay of three months in removing Ashok Tanwar as state president despite a broad agreement on the move.

Sources say Hooda holds Rahul Gandhi personally responsible for the delay. He has conceded in several television interviews that the results could have been different had the leadership structure been put in place on time.

“We would have won a full majority if we had more time. The trends are in our favour,” he said.

Even Ghulam Nabi Azad, the general secretary in charge of Haryana, agreed, saying the Congress would have done much better had Hooda been given the reins six months earlier.

Hooda was sitting in Delhi to lobby for the state president’s post when he should have been in the battlefield in Haryana. Even in the end, he was not made the state unit chief, with the central leadership opting for Kumari Selja.

Hooda was, however, given charge of the campaign committee and an upper hand in candidate selection. Sources said the internal tussles continued and ensured a poor selection of candidates in at least 10 constituencies.

The Congress can form the government only with the support of all the JJP legislators and at least five Independents.