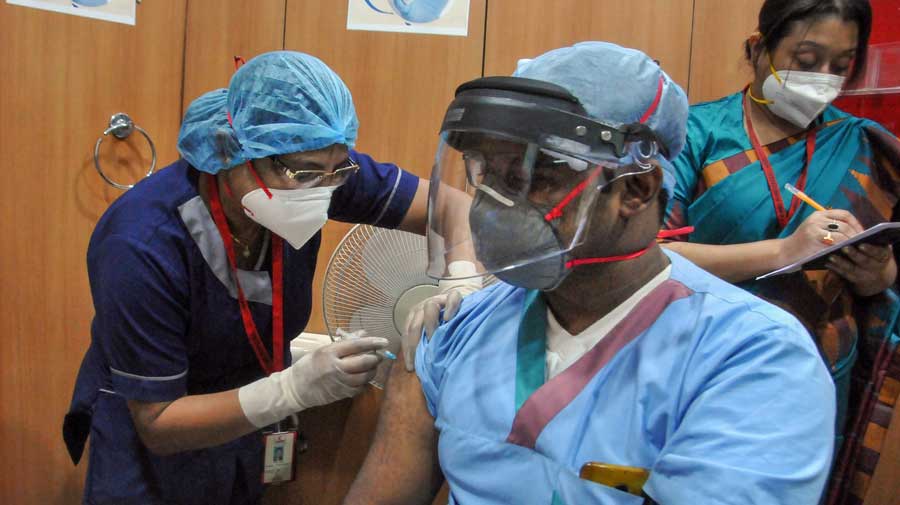 A medic administers the Covid vaccine to a frontline worker at AMRI-Dhakuria hospital in Calcutta on Saturday.
PTI
Our Special Correspondent   |   New Delhi   |   Published 18.01.21, 01:27 AM

The Congress on Sunday asked Prime Minister Narendra Modi whether the country’s citizens, particularly the poor, would receive the Covid-19 vaccine free and wondered why pharmaceutical companies were being allowed to profiteer in a time of distress.

Party communications chief Randeep Surjewala was referring to reports that the Pune-based Serum Institute of India, which is manufacturing AstraZeneca’s Covishield in the country, would sell each dose of the two-dose vaccine in the market at Rs 1,000.

“Serum Institute’s CEO Adar Poonawalla has said they will sell Covishield for Rs 1,000 per dose in the open market. They are selling the same to the government for Rs 200 per dose. Why has the Prime Minister allowed the company to create business opportunity in this crisis?” he asked.

“Why can’t the government buy from the company and make it available to those who want to buy at Rs 200 per dose?”

Surjewala went on to do the maths. “Of Rs 1,000, let us deduct Rs 200, which is the actual price. Which means Rs 800 extra per dose. If 100 crore people buy two doses of the vaccine in the open market, that means a profit of Rs 1.6 lakh crore. Has the government examined this aspect?” he said.

“We want vaccines for all and free of cost, at least for the vulnerable sections of society. While 28 per cent of the population are in the BPL (below poverty line category), 81.35 crore people are eligible for subsidised rations under the Food Security Act. It would be very difficult for these people to buy vaccines for the entire family.”

Surjewala asked whether the Covid vaccines had been put on the National List of Essential Medicines and whether the price of Rs 1,000 per dose had been approved by the National Pharmaceutical Pricing Authority. The NPPA can set price caps on medicines on the essential list.

“Why is the Modi government not demanding transparency from companies on the cost of production, licensing and the profit margin?” Surjewala said.

He also questioned the price of Rs 200 the government was paying for each dose of Covishield.

“AstraZeneca has committed to supplying the vaccine ‘at no profit’. According to Belgium minister Eva De Bleeker, the cost of (one dose of the) AstraZeneca vaccine for them is 1.78 euros ($2.18), that is, Rs 158. Why should our government pay Rs 200?” he said.

“Also, Covaxin, manufactured by Bharat Biotech, is being supplied at Rs 295 per dose to the government. Covaxin has been developed by Bharat Biotech in partnership with the Indian Council of Medical Research. Why is it charging more?”

He underlined that Covaxin had been approved for use without efficacy data.

“Why should the government pay Rs 95 more to Bharat Biotech for a vaccine that has been developed with the expertise of ICMR (and) whose trials are not completed? Should the price of such a vaccine not be cheaper than (that of) the AstraZeneca (vaccine) which has completed due process?” he said.

Surjewala appeared to chastise BJP leaders for attributing the development of the vaccines to Modi, whom one former minister has described as a “devdoot” or angel.

“Vaccine development and mass immunisation have never been political events or publicity stunts. This is not an occasion to refurbish the image of a leader,” he said. “This (mass immunisation) is the duty of the government of the day.”