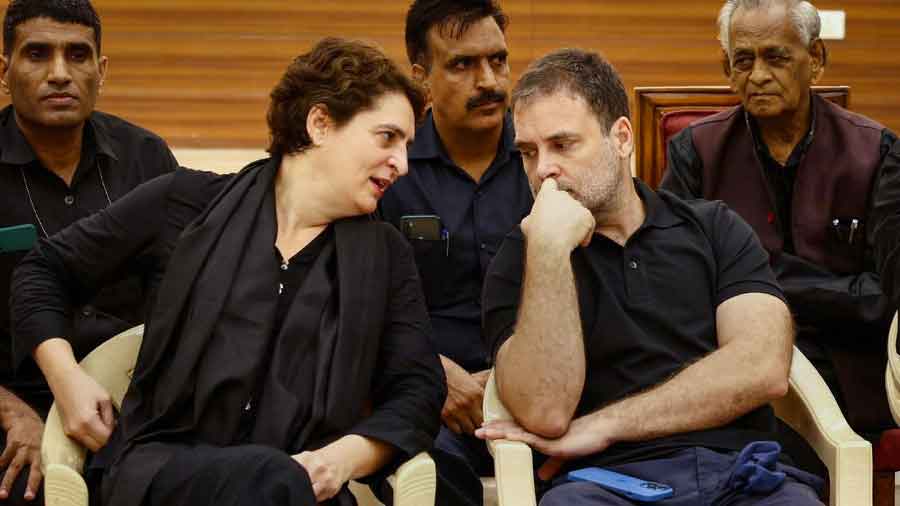 More than 60 Congress MPs, detained by the police during the party's protest in Delhi against price rise and unemployment, were released after about six hours, Congress general secretary Jairam Ramesh said on Friday.

Former Congress chief Rahul Gandhi, Priyanka Gandhi Vadra, K C Venugopal, Adhir Ranjan Chowdhury and Gaurav Gogoi were among the MPs detained and taken away from Vijay Chowk, outside AICC headquarters and other places in the national capital.

"Congress MPs have just been released after being detained for almost 6 hours for protesting peacefully and democratically against price rise, unemployment and GST," Ramesh, who had also been detained, tweeted.

The Congress has opposed the Goods and Services Tax (GST) hike on essential items.

Intimation about detention of MPs/MLAs is being sent to the respective competent authorities, the police said.

The protesters were appropriately warned about the prohibitory orders in force in the area and repeatedly requested to disperse from the area, the police said.

However, they continued the protest, thereby violating prohibitory orders under section 144 CrPC, it said.

"When the police personnel moved in to contain the situation, the protestors tried to obstruct the police officers from performing their duties, manhandled and injured them. Appropriate legal action is being taken into the matter," the police said.

'Rahul should not blame democracy'