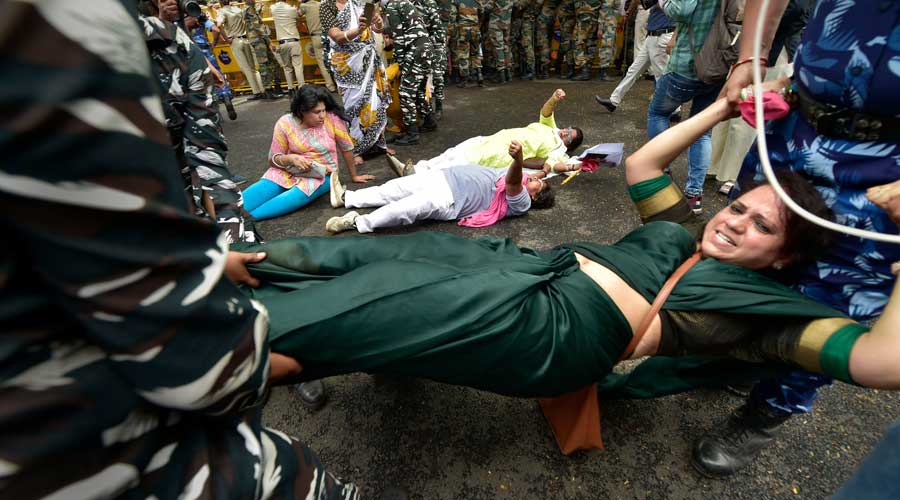 The Congress on Tuesday staged a Satyagraha at the party headquarters here alleging "misuse" of the Enforcement Directorate and "harassment" of party leader Rahul Gandhi, who is being questioned by the probe agency for the fifth day in the National Herald money laundering case.

The protesting leaders, including Rajasthan Chief Minister Ashok Gehlot and Chhattisgarh Chief Minister Bhupesh Baghel, later announced a march to Jantar Mantar, but the police prevented them for lack of permission. Several Congress workers were detained.

The police said the Congress leaders were given permission to stage a protest at Jantar Mantar but they were not allowed to take out a march.

Baghel, along with supporters, sat on road outside the Congress office while Gehlot dubbed the BJP leaders "fascists" masquerading as believers of democracy to befool people.

"They (BJP leaders) are fascists and have worn the mask of democracy. They are trying to pit one community against the other and are breaking the social fabric," he said, exhorting party workers to continue with their Satyagraha against the government's "atrocities".

The police also put up barricades around the All India Congress Committee office, but the angry protesters broke some barriers.

The Congress workers also raised slogans against 'Agnipath', saying it was only a ploy to divert the attention from the government's failures and that the scheme would thrust the youth towards darkness.

The party leaders had on Monday met President Ram Nath Kovind and submitted a complaint alleging that the police were harassing the party MPs and probe agencies were being misused.