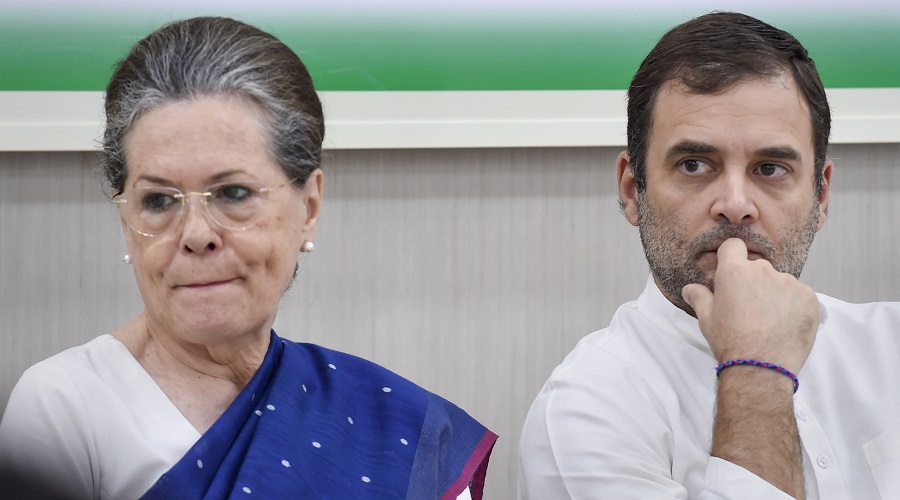 The Congress working committee on Monday appeared set to close ranks behind Sonia Gandhi, urging her to stay on as party chief after she offered to step down as interim president following a letter by more than 20 leaders demanding an "active, full-time and visible" president.

Though a large section of the leaders backed Sonia Gandhi at the nearly seven-hour virtual meeting of the Congress's highest decision making body to discuss the pivotal leadership issue, the faultlines were clear and appeared to deepen at some points as the day progressed.

P. Chidambaram suggested the holding of a virtual AICC session to start the process of holding elections for a new party chief.

However, the stage seems set for the CWC endorsing Sonia Gandhi continuation as party chief, with the letter writers isolated and under attack from several leaders. The meeting was attended by 48 leaders.

Former president Rahul Gandhi, it is learnt, launched a sharp attack against the signatories, questioning their timing and their decision to go public with their grievances. He also rued the fact that the letter seeking sweeping changes to the party organisation and elections to the CWC was written when Sonia Gandhi was in hospital and the party was battling a political crisis in Rajasthan.

He said Sonia Gandhi had accepted charge as party president only after the CWC last year urged her to take the responsibility.

"It is the CWC and not the media, where we voice our grievances and discuss issues," sources quoted Rahul Gandhi as telling the CWC members.

Rahul, the sources indicated, also insinuated that the letter would help the BJP.

Earlier in the day, Kapil Sibal, senior leader and one of the signatories to the letter, created a flutter when he hit out at Rahul Gandhi on Twitter for a purported remark on the BJP. Sibal, who is not a part of the CWC, withdrew his tweet a little later.

"Was informed by Rahul Gandhi personally that he never said what was attributed to him. I therefore withdraw my tweet," he said on Twitter.

The Congress also denied that Rahul Gandhi had accused any party leader of "colluding with the BJP".

"Rahul Gandhi hasn't said a word of this nature nor alluded to it. Please don't be misled by false media discourse or misinformation being spread.

"But yes, we all need to work together in fighting the draconian Modi rule rather then fighting & hurting each other and the Congress," the party's chief spokesperson Randeep Surjewala said on Twitter, tagging Sibal's earlier tweet.

Azad, too, attempted to set the record straight. “A section of media is wrongly attributing that, in CWC I told Shri Rahul Gandhi to prove that the letter written by us is in collusion with BJP. Let me make it very clear that Shri Rahul Gandhi has neither in CWC nor outside said that this letter was written at the behest of BJP,” the leader of Opposition in the Rajya Sabha said.

Azad was at the proverbial centre of the storm in the CWC. Former defence minister A.K. Antony termed the letter "cruel", while his colleague Ambika Soni described the missive as unfortunate and said the party had given Azad a lot.

Sources said Azad offered to resign at the meeting amid questions being raised on the letter, its timing and its leakage to the media.

Sonia Gandhi also referred to Azad twice in her opening remarks, saying he had even sent a reminder to his letter, the sources said. To this she said she had given her reply to K. C. Venugopal expressing her desire to be relieved of the post and the party should initiate the process to find her replacement.

While most leaders backed Sonia's continuation as party chief, there were some who proposed Rahul Gandhi's return as president, the sources said.

Venugopal read out the letter written by Sonia Gandhi and criticised the party leaders who were behind the letter.

Besides Azad, Anand Sharma, Mukul Wasnik and Jitin Prasada attended the meeting that was divided between those demanding collective leadership and those reposing faith in the Gandhi family.

Almost all Lok Sabha MPs of the party have written to Sonia Gandhi expressing solidarity and urging her to continue in her post or install Rahul Gandhi.

Besides, several state units, including Delhi and Rajasthan, have passed resolutions favouring the leadership of the Gandhis.

The letter is the second challenge to Sonia Gandhi's leadership after 1999 when then leader of Opposition in Lok Sabha Sharad Pawar raised the issue of her foreign origins in order to keep her from being named the party's prime ministerial face in the general elections that year.

Sonia Gandhi then resigned in the CWC, which rejected her move unanimously bringing her back as party president. While Sonia Gandhi went on to become the longest serving Congress president, Pawar and rebels quit to form the NCP.