Rahul hopes to dent Modi's image as an honest and decisive leader, perceived attributes that served him well in 2014 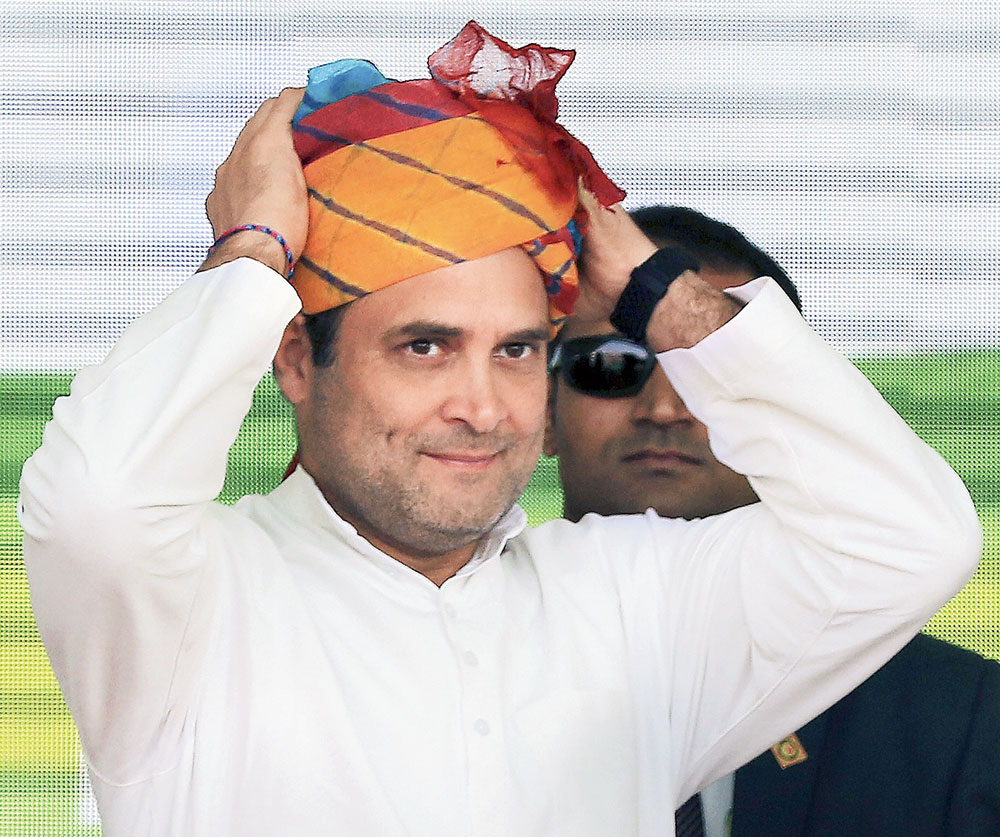 Rahul Gandhi taunted Prime Minister Narendra Modi on Wednesday for getting defence minister Nirmala Sitharaman to defend him during the Rafale debate in Parliament instead of facing the questions himself.

“The defence minister spoke for over two hours but couldn’t answer — with a ‘yes’ or ‘no’ — my question whether officials of the defence ministry or the air force had objected to the Prime Minister’s decision to change the (UPA-negotiated) deal.”

Addressing a public meeting later in the day in Agra, Modi accused the Opposition of insulting Sitharaman and “all the women in India” but did not mention Rahul or his statement.

“Mahila raksha mantri ka apman poori Hindustan ki nari shakti ka apman hai (An insult to the woman defence minister is an insult to all the women in India),” he said.

Rahul responded with a stinging tweet: “With all due respect Modi Ji, in our culture respect for women begins at home. Stop shaking. Be a man and answer my question: Did the Air Force and Defence Ministry object when you bypassed the original Rafale deal? Yes? Or No?”

The Jaipur rally was Rahul’s first after the Assembly election results, and appeared to mark the formal start of the general election campaign.

By attacking Modi on Rafale and highlighting his failure to answer questions upfront, Rahul hopes to dent the Prime Minister’s image as an honest and decisive leader, perceived attributes that had served him well in 2014.

Rahul also referred to the Supreme Court order reinstating CBI director Alok Verma, saying: “Why was he removed in a midnight operation? Because he wanted to initiate an inquiry into the Rafale deal.”

He went on: “The Rafale deal must be investigated. The Prime Minister violated norms and junked public-sector HAL to help Anil Ambani. The watchman committed theft. The Congress has brought this issue before the people’s court. You have to take the same decision that you took during the recent Assembly elections.”

Rahul said the election results in Rajasthan, Madhya Pradesh and Chhattisgarh had delivered a firm message to the Prime Minister that the farmers were capable of making a political impact.

“The farmers have taught a lesson to Modi: they have told him, ‘If you can write off corporate debts, why not waive farm loans?’ He will have to waive farmers’ loans in every state. We won’t allow him to sleep unless he does. If he doesn’t, the new government will do this,” Rahul said.

Although the rally was organised primarily to highlight the party’s prompt farm loan waivers in the three heartland states it won last month, Rahul used it to clarify that he didn’t believe this was the solution to agrarian distress.

“We demanded loan waivers as a gesture of justice. If the government wrote off Rs 3.5 lakh crore of (debts in favour of) a few corporate houses, why not give relief to the indebted farmers? The farmers of the country were staring at a bleak future; they couldn’t decide what to do. The loan waiver just provided immediate relief,” he said.

“This is the first step, not the solution to farmers’ problems. A new approach is needed to resolve the agrarian crisis. Proper planning and strategy are required. The first green revolution made India self-reliant in food production. Let us plan another green revolution to connect the farmers to global dining rooms. Farmers here should not only feed the people of Rajasthan but reach the dining rooms of all major cities in the world.”

Rahul added: “We will set up food-processing industries, mega food parks, cold storage chains and link the farmers to international markets. Modi made lofty promises but didn’t deliver. We will show how it’s done.”

He drew cheers as he said: “We are here to listen to you and act on your advice. Janata malik hai (The people are the masters).”

Speaking before Rahul, chief minister Ashok Gehlot announced several measures, including the establishment of food-processing units. He also announced the immediate release of the minimum support price for farm produce from the state exchequer and a freeze on farm power tariff hikes for the next five years.