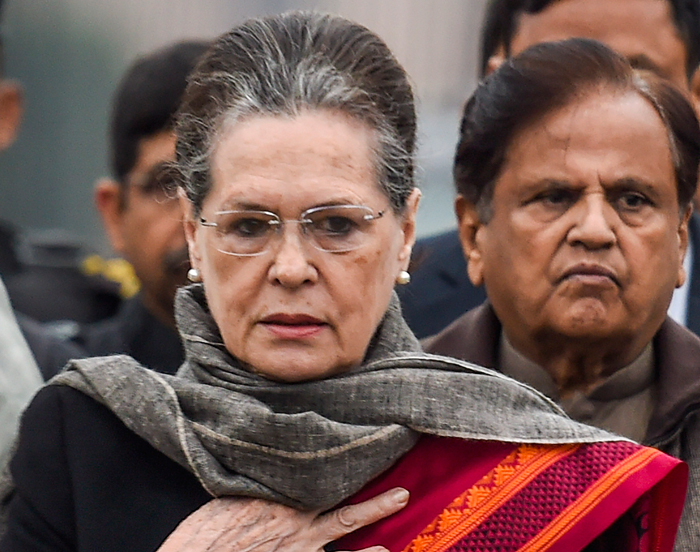 The Congress leadership has decided to restrict its involvement in the nationwide agitation against the Citizenship (Amendment) Act and the National Register of Citizens, although it is opposed to these and plans to build a political resistance to the government’s agenda.

Senior Congress sources told The Telegraph the party would “do its best” to oppose the government on the matter but felt that any attempt to “hijack” the students’ movement would send out a wrong message and prove counter-productive.

They said the party would extend moral support to the agitation and give voice to the national outrage instead of getting directly involved.

“This is a spontaneous people’s uprising against the wrong policies of the government. The reaction of the students is not an orchestrated one. Why should we try to hijack it?” a party strategist said.

“The demands for the Congress to provide leadership are immature. A people’s agitation shouldn’t be given a political colour. The Congress has made its stance clear in Parliament and at the Bharat Bachao rally. Sonia Gandhi has articulated the party’s position again in a video message. We will build our own movement and the time for that is coming now.”

Congress leaders said they were not viewing the matter through the prism of electoral gains or political tactics.

“This is a simple test for India — whether it will survive as a constitutional democracy. This is above power politics. Soniaji has made it clear there can’t be any compromise on this,” a party source said.

“We know that Narendra Modi and Amit Shah are ruthlessly executing the RSS agenda to establish a Hindu Rashtra. We are happy to see the people’s reactions, particularly those of the youth who have busted the myth of India’s tolerance of bigotry.”

The Congress has dedicated its foundation day celebrations on December 28 to the fight against the amended citizenship law and the NRC, and asked its state units to gear up for a sustained battle.

Rahul Gandhi is to lead a dharna at Rajghat on Monday.

All the Congress chief ministers have refused to implement the citizenship amendment and the NRC and begun a direct conversation with the people on the subject.

While Rajasthan chief minister Ashok Gehlot will lead a “Shanti March” in Jaipur on Sunday to explain to the people the nature of the threat posed by the CAA-NRC, his Madhya Pradesh counterpart Kamal Nath will lead a similar rally on December 25.

“All the people who believe in religious amity and the equality of citizens are invited to participate. The country is boiling, every section is agitated, and the government is using force and misinformation to crush the movement,” Gehlot said on Saturday.

“Our purpose is to send out a clear message that the country can be run only on the basis of constitutionalism.”

Chhattisgarh chief minister Bhupesh Baghel, who has been most consistent in his opposition to the CAA-NRC, reaffirmed: “I will be the first person not to sign the NRC.”

The Congress has taken care to demonstrate its solidarity with the protesters.

Sonia has issued a statement condemning the assault on students and describing the CAA-NRC as an attack on India’s soul. Priyanka Gandhi Vadra staged a sit-in at India Gate and briefly joined the

protest at Jantar Mantar to register the party’s moral support.

Priyanka issued a statement on Saturday attacking the government’s “dictatorial mindset” in applying brutal force to quell the protests.

“The arrest of students, intellectuals, social workers, lawyers and journalists is condemnable,” she said.

Being the general secretary in charge of Uttar Pradesh, which has witnessed the worst police crackdown and several deaths, Priyanka’s focus was more on the coercive methods of the government.

“Every Indian will have to prove his or her Indian identity by producing some document. In this process, most of the poor and deprived people will be persecuted.”

She also called for peace and harmony, recalling that the freedom struggle against British rule had been based on truth and non-violence.

Other senior leaders too indicated the party’s thinking. Ahmed Patel tweeted: “India is proud of her student community, who have always demonstrated unparalleled commitment and zest to uphold the spirit of India.

“Whenever governments have strayed away from the constitutional path, students have been the real chowkidars. Our Republic is in crisis and the only remedy is in the unity of our people and Gandhian dissent.”

Former minister P. Chidambaram tweeted: “What are at stake — liberty, equality, constitutional morality — are so important that we must seize the moment and push back the authoritarian regime.”

The party will demonstrate its resolve to battle it out on the field by holding demonstrations in every part of the country on December 28, followed by bigger rallies in the states.