The march will pass through 750 villages, around 100 towns in Gujarat, Rajasthan and Haryana before reaching Rajghat on June 1 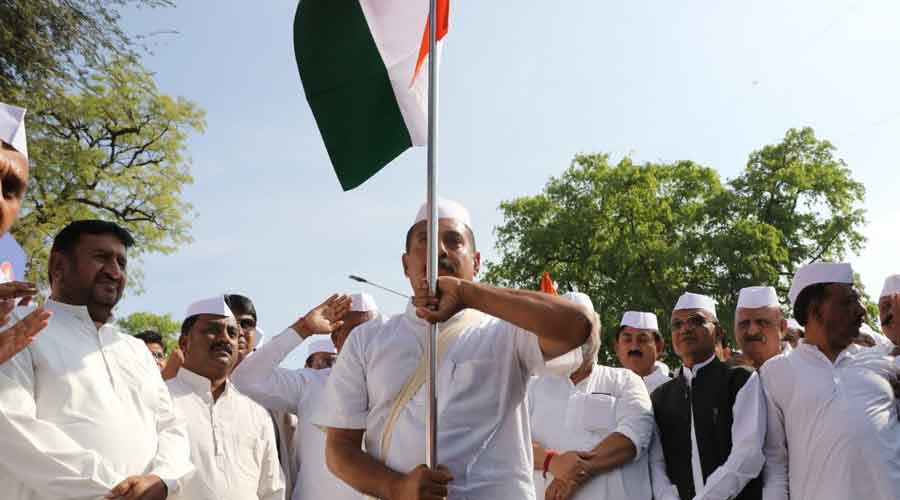 The Congress on Wednesday launched an “Azadi Gaurav Yatra” (Independence Pride March) from the Sabarmati Ashram in Gujarat to promote unity and social harmony amid what it described as an “atmosphere of hate” poisoning the national discourse.

While the march is linked to the upcoming 75th anniversary of India’s Independence, the Congress wants to use it to send out a political message against the ideological dominance of the BJP-RSS and the combine’s perceived monopoly on nationalism.

The march will pass through 750 villages and around 100 towns in Gujarat, Rajasthan and Haryana before reaching Rajghat in Delhi on June 1 for a rally that will be addressed by Rahul Gandhi. Senior Congress leaders from Gujarat participated in the march on Wednesday.

The party’s Gujarat minder, Raghu Sharma, said the purpose of the programme was to spread awareness about the need for unity at a time an atmosphere of hate was being created in the country.

The Congress posted several messages stressing that Gandhian tolerance and communal amity alone can make for a strong and progressive country.

The Sabarmati Ashram, from where the Yatra started, had been home to the Mahatma from 1917 to 1930, during which he launched several of his Satyagraha movements. It is now in the spotlight over the Narendra Modi government’s plans to “renovate” it in a manner that critics say will “commercialise” it and “corrupt its pristine simplicity”.

“The purpose (of the Yatra) is to remember the freedom fighters and stalwarts who built this nation. We have called it, ‘Zara yaad karo qurbani (Remember the sacrifices)’,” Lalji Desai, chief of the front organisation Seva Dal who is coordinating the march, said.

“Our message is unity against hatred and divisive politics. We intend to interact with at least 3 lakh people on the way. We shall also raise contemporary issues like the price rise and oppression by this government.”

The messaging reflects the Congress’s concern at the BJP’s capture of the nationalist space despite its forbears’ lack of participation in the freedom struggle.

In recent elections, voters have tended to ignore their miseries and BJP governments’ failures to vote for the ruling party in the name of nationalism and security.

Villagers have often admitted before cameras that they are suffering wretched poverty but added that they feel obliged to vote for “rashtravad”.

Congress leaders admit that their political offensives have often been blunted by BJP propaganda on nationalism and security. The BJP has countered even the complaints about the savage price rise with the argument that the nation is above petty concerns about prices.

Despite the Opposition’s highlighting of abject governance failures, Prime Minister Modi has christened the current period as an “Amrit Kaal” that is witnessing the rise of a new, stronger India.

The Congress has in the recent past tried to counter this narrative without much success. This Yatra reflects its belief that mass contact programmes can yield better results than news conferences.

One message posted by the party read: “75 years ago, Congress fought valiantly for our country’s freedom. Today, Congress continues to fight the forces that try to constrain our freedom.”

The Congress has been rattled by the BJP’s success in diverting the spotlight from issues of bread and butter to those congenial to its version of “nationalism”, such as the film The Kashmir Files and the strictures on hijab and halal meat in Karnataka.

Even on Wednesday, Congress communications chief Randeep Surjewala expressed frustration at the content of the Prime Minister’s address on the BJP’s foundation day.

“But the Prime Minister will lecture on the past 70 years, dynasty, nationalism, new India, etc, because he understands that people can be deceived by pseudo-nationalism and religious propaganda.”