Advertisement
Home / India / Jaipur rally: Gandhis slam Modi government over non-performance
‘India is a country of Hindus and not Hindutvadis’ 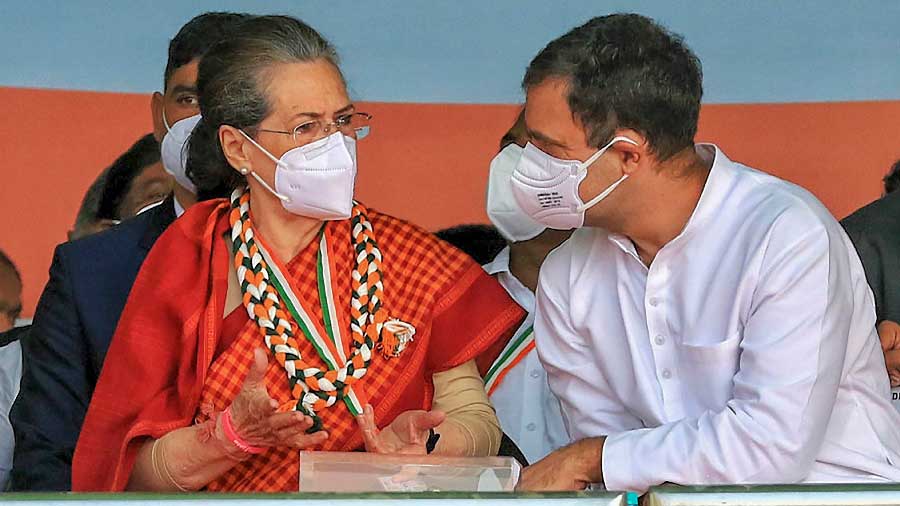 Congress leader Rahul Gandhi on Sunday said India is a country of Hindus and not Hindutvadis, who want to be in power in any condition.

He said if there is inflation in the country and there is suffering, then this has been done by Hindutvadis.

"This is a country of Hindus, not Hindutvadis. If there is inflation in the country and there is suffering, then this has been done by Hindutvadis. Hindutvadis want power in any condition," Gandhi said addressing a rally against rising inflation here.

He targeted Prime Minister Narendra Modi, saying his friends have "ruined" the country during the NDA dispensation.

"I am Hindu and not Hindutvadi," he said.

Attacking the Narendra Modi government in the same rally, Congress leader Priyanka Gandhi Vadra charged that the BJP government wants to sell to its industrialist friends whatever her party had built in 70 years.

She said when elections come, BJP leaders talk of China or other countries, casteism, communalism but not about the struggles of the people and asked what the Modi government has done in seven years of its rule.

Gandhi alleged that the government is working for select industrialist friends instead of working for the good of the people and farmers of the country.

The Modi government at the Centre repeatedly questions what Congress has done in 70 years. I say leave the talk of 70 years. Tell us what you have done in seven years? she asked,

She charged that whatever the Congress built in 70 years, the Central government wants to sell it to industrialist friends.

Targeting the Uttar Pradesh government, Gandhi charged that the Yogi Adityanath dispensation is spending crores of rupees on advertisements but has failed in getting farmers fertiliser.

PM Modi does not respond to letters, alleges Gehlot

Rajasthan Chief Minister Ashok Gehlot on Sunday accused the Centre of misgovernance and alleged that Prime Minister Narendra Modi does not respond to letters written by him.

Whenever the state made a demand, the Centre did not care, Gehlot said addressing a Congress rally on price rise here. Gehlot alleged that misgovernance exists ever since the Modi government came to power.

Farmers were killed, the price of petrol, diesel, cooking gas and everything else has increased, he said while holding policies of the Centre responsible for inflation.

Former Rajasthan deputy Chief Minister Sachin Pilot on Sunday accused the Modi government of driving the country to darkness calling both its policy and intention bad.

He said the centre must work to curb the inflation just like it withdrew the farm laws.

You (BJP) will not always sit on the throne of the country. The central government will have to bow down after seeing the rally like it bowed its head in front of the farmers, he said.

He said the BJP seeks votes by dividing people in the name of religion and castes, but the people of the country now want change.

Pilot said it is only the Congress party which can challenge the BJP.