Congress aware of its failings, says Sonia Gandhi in addresses at Chintan Shivir

Other proposals at Udaipur brainstorming session include 5-year cap on posts, office-bearers aged less than 50 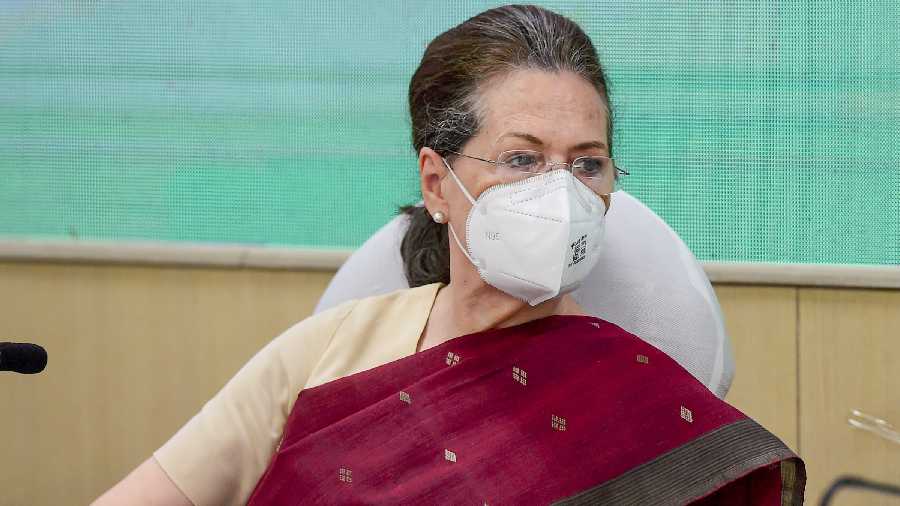 Congress chief Sonia Gandhi on Friday launched a blistering attack on Prime Minister Narendra Modi, charging that it has become clear that his mantra of 'minimum government, maximum governance' means keeping the country in a permanent state of polarisation, "brutalising" minorities and "threatening" political opponents.

In her inaugural address at the party's 'Chintan Shivir' here, she urged delegates to deliberate with an open mind and send out a clear message of strong organisation and unity.

She said the Shivir is also an occasion to deliberate on the many challenges ahead of us and bring organisational changes.

It is both 'Chintan' about national issues and meaningful 'aatmachintan' (self-introspection) about our party organisation, she said.

Gandhi charged that it has become painfully clear what Prime Minister Modi and his colleagues really meany by their frequently used slogan of maximum governance, minimum government.

It means keeping the country in a permanent state of polarisation, compelling people to stay in a constant state of fear and insecurity. It means viciously targeting, victimising and brutalising minorities who are an integral part of our society and equal citizens of our republic, she charged.

It means using our societies age old pluralities to divide us and subverting a carefully nurtured idea of unity and diversity. It means threatening and intimidating political opponents, maligning their reputation, jailing them on flimsy pretexts using investigative agencies Gandhi further alleged.

She urged party leaders to keep the organisation above personal ambitions, saying the party has given us a lot and it's time to pay back.

Noting that changes in organisation are the need of the hour, she said, We need to change the way of our working.

The Congress is likely to enforce the 'One family, one ticket' formula granting exemption to only another family member who has been doing "exemplary work" for the party for a period of at least five years, as the grand old party promised big ticket changes while acknowledging that it had not kept pace with changing times.

The other major organisational reforms being considered include establishing mandal committees between booth and block level in the organisation, 50 percent representation to those below 50 years of age in party committees at all levels, fixing the maximum of five years tenure for party positions with a cooling off period of three years, setting up of a 'public insight department' for creating an in house survey mechanism and an assessment wing to gauge the performance of office bearers.

Addressing a press conference ahead of the party's 'Chintan Shivir' here on Friday, Congress general secretary Ajay Maken, while acknowledging that the organisation needed an overhaul to keep pace with the changing times, said these "big changes" are in store for the party organisation and it will completely transform its working style going forward.

He said there is unanimity on establishing mandal committees between booth and block level in party organisation, which will further help strengthen the organisation.

Maken, who is a member of the coordination committee on organisation for discussion at the Chintan Shivir, said the party is deliberating on setting up a 'public insight department' to ascertain views of the people and carry out surveys for getting battle ready for elections.

"The Congress is also considering setting up an 'assessment wing' to gauge performance of office bearers," he said, adding that good workers should be rewarded and promoted while non-performers be removed.

Noting that this is going to be a historic conclave, he said, “A range of discussions are ongoing mainly across six specific subjects and after debates of various panels on organisational matters are adopted and implemented, you will see a massive overhaul of the Congress organisation from bottom to top across all levels.

“The discussions at the Shivir will lay the foundations for a massive organisational overhaul. The 'One family, one ticket' rule has been discussed and will be discussed further. There is near consensus on this formula and exception will only be made if the second ticket aspirant has worked in the party for five years, doing exemplary work,” Maken told reporters.

“This should not happen that a relative or son of an old leader straight away comes and fights polls,” he added.

The formula will be applicable to all in the party including the Gandhi family. The exemption, however, assumes significance considering that the party is often under attack for promoting dynastic politics. The rule is being taken up to weed out multiple ticket seekers from influential families and parachute candidates. The exemption would provide a lifeline to families with many members working relentlessly for years for the organisation.

Noting that the Congress organisational structure has not changed in 50 to 60 years, the Congress leader said, “We have not undertaken any transformation. Consensus is now emerging on building a new organisational unit called the mandal between the polling booth and the blocks.”

Maken said, "We normally commission survey agencies during polls and there is now near unanimity for establishing an internal public insight department for routine surveys related to people's issues and to assess which pro people agenda should the Congress espouse."

"The time is changing, but we have not been able to change as fast as the times," he admitted.

"The public insight department will be an in house department which will be active not just in elections but will also work round the year to provide a technology-based feedback mechanism on which issues matter most to the people and which issues should the Congress take up as a strong opposition," Maken said.

"With party workers often discussing that good workers are not rewarded and poor performers are not punished," he said, "consensus is building on developing an internal assessment wing which will set parameters to promote talent."

“Assessment of office bearers is being mooted to promote good workers and to remove others from active posts.

"We are also working on a mechanism for enforcing stricter discipline," he said.

The three-day 'Nav Sankalp Chintan Shivir' is being held in the backdrop of a string of electoral defeats and dissent in the party for the past many years.

The Shivir will focus on time-bound party restructuring, finding ways to combat politics of polarisation and getting battle-ready for upcoming electoral challenges.

It will begin Friday afternoon following which over 400 delegates will discuss subject-specific issues across six groups. These discussions will continue on the first and second day and the conclusions will be recorded in the form of a declaration, a draft of which will be discussed at the CWC meeting to be held there on the third and last day.