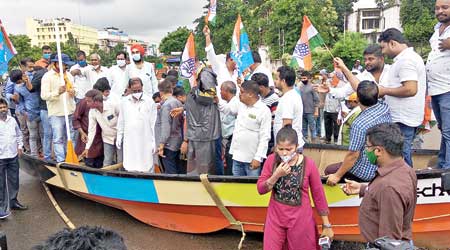 Congress workers protest against water-logging in Bhubaneswar standing on a boat in the Odisha capital on Friday
Ashwinee Pati
Subhashish Mohanty   |   Bhubaneswar   |   Published 24.07.21, 12:55 AM

Odisha Congress on Friday resorted to a unique style of protest to highlight the problem of waterlogging in the capital city in the wake of torrential rains during the past 24 hours.

Party workers led by Jatni MLA and former minister Suresh Kumar Routray demonstrated in the centre of the city at Master Canteen Square where they placed a huge boat on the road to attract the attention of the passers by. The party demanded that the Naveen Patnaik government, which has failed to resolve the waterlogging problem, should launch a “Mo Danga – My Boat – programme on the lines of Mo Bus (My bus — public transport bus service that runs in Bhubaneswar)

Routray said: “The city has been waterlogged for the last 24 hours. Most of the areas of the city including the environs of Lingaraj temple, Chandrasekharpur, Gadkanna and other parts of the city, have been submerged following the incessant rains. No steps have been taken to resolve the issue and bring relief to the people.”

Routray, who stood on the boat carrying the Congress flag, said, “The Naveen Patnaik government has introduced a number of programmes like giving umbrellas and slippers to people. It should also initiate the Mo Danga programme to help people reach their houses when the city is water-logged.”

The leader warned that his party would soon gherao the office of the Bhubaneswar Development Authority, Bhubaneswar Municipal Corporations and other offices concerned with the issue if the administration failed to take longterm steps to overcome the waterlogging problem.

Bhubaneswar has been experiencing intermittent rains for the last three days. The city, which won two awards in June in the India Smart City Awards contest and was adjudged the second best in the social aspects project category, has encountered the problem of severe waterlogging even in the past.

Another Congress leader Biswajit Das said, “There has been no development in the city. Even the main roads get waterlogged after short spells of rain. This has been recurrent problem. The talk of smart city is just an eye-wash.”

Congress leaders had procured the boat from a boat repairing shop in Mancheswar and after transporting it to the central part of the city loaded it on the truck using a crane. The boat mounted on the truck was placed on the road near the iconic warrior horse statue at Master Canteen Square, to draw maximum attention. The party office, Congress Bhavan, is located nearby. Neither the ruling Biju Janata Dal (BJD) nor any wing of the government, including the Bhubaneswar Municipal Corporation (BMC), have reacted to Congress’ charge so far.