Communal violence in Delhi: Gap between guideline and riot action 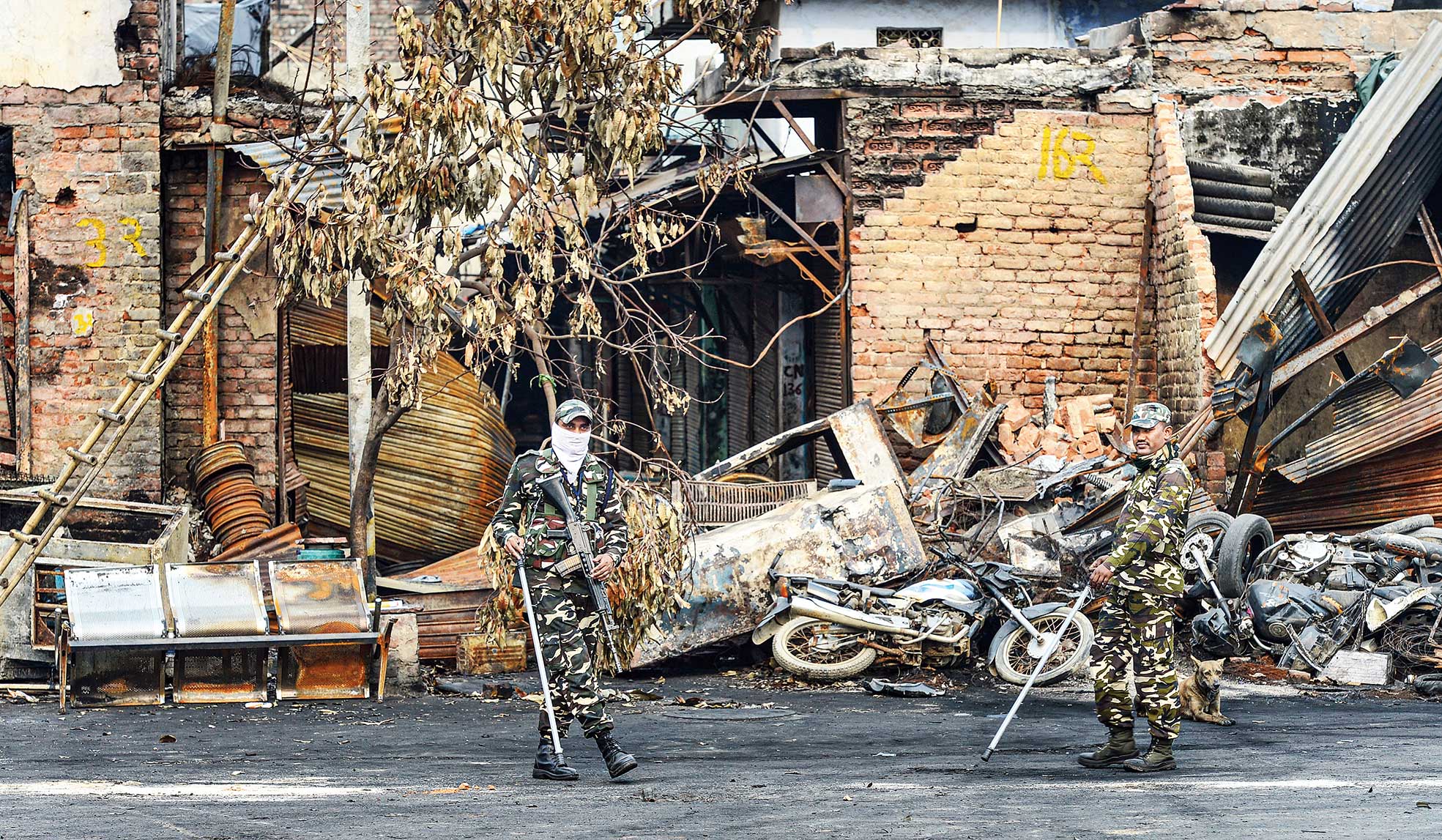 But the Delhi police, who report directly to Shah, flouted most of these “Guidelines on Communal Harmony” during last week’s rioting that killed at least 48 people, according to eyewitnesses, security experts including retired police and intelligence officials, and even some home ministry bureaucrats.

“There was complete violation of the guidelines by the Delhi police, who are under the direct control of Amit Shah. There seemed a lack of resolve to stem the violence,” Ashok Kumar Singh, security expert and retired army colonel, told The Telegraph.

A former Intelligence Bureau official stressed that the riot-hit areas of northeast Delhi fell were within 10-15km of the Prime Minister’s Office and the home ministry’s North Block seat, besides Rashtrapati Bhavan, the headquarters of the army, Intelligence Bureau and the police, and the highest court of the land.

“It’s shocking that the violence continued for so many days so close to the country’s seat of governance. The police colluded with the rioters, allowing them to create havoc with people’s lives and properties,” he said, asking not to be named.

Singh flagged several “disturbing facts”: how the police often appeared to be “part of the rioters”, the lack of

“visible strong actions or statements from the ruling party against communal violence”, the “intolerance to the right to protest” and the way “non-state actors dictated terms”.

“It was a well-organised attack on Muslims by non-state actors supported by the police,” he said.

A look at what the guidelines — sent to state governments whenever a communal riot breaks out — say and what actually took place on the ground during last week’s communal violence in Delhi:

Guideline: “Whenever any communal incidents are apprehended or occur, prompt and immediate preventive/enforcement action may be taken, including imposition of prohibitory orders/curfew as necessary, and strict and neutral enforcement of the same, apprehension/arrest of the potential miscreants/ those indulging in violence, arson etc, registration/institution of cases.”

Ground report: The violence began on February 23 night after BJP politician Kapil Mishra led a march and was accused of making a provocative speech. The police imposed Section 144 in some pockets on February 24 night only after daylong violence, and clamped a curfew only on February 25 night in four areas of northeast Delhi.

Four people including a head constable had been killed in rioting on Monday, the day US President Donald Trump landed in Delhi in the evening.

“It doesn’t look good to impose curfew in the capital during a VVIP visit,” a home ministry official told this newspaper.

“Not only was curfew imposed after so much damage was already done,” a security expert said, “it was not enforced well, either.”

The violence had continued through February 26, with armed mobs roaming the streets unchecked, committing arson and murder, he said.

Guideline: The guidelines on “personnel policy” stipulate the “creation of composite battalions of armed police, which should include members of all communities including SCs/STs for use in maintaining communal peace and amity in the sensitive areas”. The idea is to enhance the force’s credibility and help build confidence among all sections of residents.

“In communally sensitive and riot-prone areas, police and administrative officials of proven integrity, efficiency, impartiality and non-partisan outlook should be posted,” the guidelines add.

“Every public servant should exercise that lawful authority vested in him/her to prevent the commission of any communal violence, protect or provide protection to any victim of communal violence in a strictly neutral manner, and any mala fide act or omission should be strictly dealt with.”

Ground report: Home ministry and police sources say no effort to follow these advisories was visible.

Videos appear to show the police idly watching mobs run amok or even participating in the violence. “The police showed a partisan attitude when minority-populated neighbourhoods were surrounded by rioters. The police, armed with batons and rifles, looked on passively while goons torched homes and vehicles. Why didn’t they fire at the rioters?” a retired Delhi police officer, who didn’t want to be quoted, said.

Guideline: “Preventing a communal riot is far more important than containing it…. The district administration should anticipate possible developments… and prepare a detailed SOP (standard operating procedure) and contingency plans to deal with them so that escalated situation/riots, etc, could be pre-empted/prevented.”

Also, “special attention needs to be given to developing mechanisms for intelligence and information-gathering…. The intelligence feedback, especially from the ground level, should be effectively made use of.”

Ground report: There was either a colossal intelligence failure or a very half-hearted attempt at preventing riots. Police and eyewitness accounts suggest that hordes of rioters entered Delhi from neighbouring Haryana and Uttar Pradesh on buses and lorries, bringing truckloads of stones, bricks and iron rods besides country-made guns, swords, petrol and acid.

“Hundreds of armed outsiders could not have landed up suddenly after Mishra delivered his provocative speech on Sunday. What were the police and Intelligence Bureau doing?” Singh said.

Even a home ministry bureaucrat, speaking on condition of anonymity, castigated the police for failing to seal the inter-state borders even after the violence escalated on Monday morning.

Guideline: “During communal disturbances, various VIPs/political dignitaries visit these areas with a view to strengthening the public confidence…. Necessary care may be taken by all to ensure that measures taken by the local administration for maintenance of law and order and conducting relief operations, etc, continue as per the plans.”

Ground report: Chief minister Arvind Kejriwal and his deputy Manish Sisodia visited the riot-affected areas only on February 26, something no BJP politician — neither Shah nor local MP Manoj Tiwari — has done so far. Nor has Shah spoken a word on the violence.

National security adviser Ajit Doval visited violence-hit Muslim neighbourhoods in Jaffrabad on February 26 afternoon and gave assurances, doing a job that many believe was Shah’s to do.

Guideline: “Adequate steps should be taken to ensure that no damage is caused to… religious places and premises,” the guidelines say, stressing that the Places of Worship (Special Provisions) Act 1991 provides for “imprisonment for damaging… and for the establishment of special courts for speedy trial”.

Also, “if a communal incident occurs, a report should be sent to the Union home ministry immediately, which should be followed (up) with a detailed report mentioning, inter alia, the grant of awards for good work or punishment for showing laxity to the district officers connected with the incidents.”

Ground report: Several mosques were vandalised and torched by mobs. No special court has been set up yet.

Guideline: “Prosecution of offences relating to communal violence/rioting should be carefully monitored and, wherever necessary, special investigation teams (SIT) may be constituted for ensuring fair and impartial investigation.”

Deo and Tirkey are supervising the probes into the alleged police atrocities at Jamia Millia Islamia on December 15 and the allegedly ABVP-led mob violence at JNU on January 5, respectively. No action has yet been taken against any suspects.

The Election Commission had rapped Deo and barred him from any poll-related duty during the recent Delhi Assembly elections.

The guidelines had for the first time been sent to the state governments on October 22, 1997, when CPI leader Indrajit Gupta was home minister in Inder Kumar Gujral’s United Front government.

“It has been amply demonstrated in the past that, if due vigilance is maintained, careful planning done and preparatory measures put in place, many incidents of communal violence can be pre-empted and prevented and wherever, despite this, communal violence does occur, it can be contained effectively and much human suffering avoided, if it is tackled with promptness, grit and determination,” the guidelines say.

“It needs hardly be emphasised that the utmost care and attention requires to be given to the planning and implementation of a range of measures to alleviate the sufferings of those affected by any incidents of communal violence, including the provision of relief and rehabilitation assistance to the victims of such violence.”

To the chief ministers and chief secretaries, the guidelines say: “Your personal attention and periodic review at your level will go a long way in ensuring the operational effectiveness of, and achieving the larger goal of, communal harmony underlying these guidelines.”