Colonel and major killed in Kashmir

Police said Lashkar’s Pakistani commander Haider and another militant were killed in the encounter, which lasted till 1am 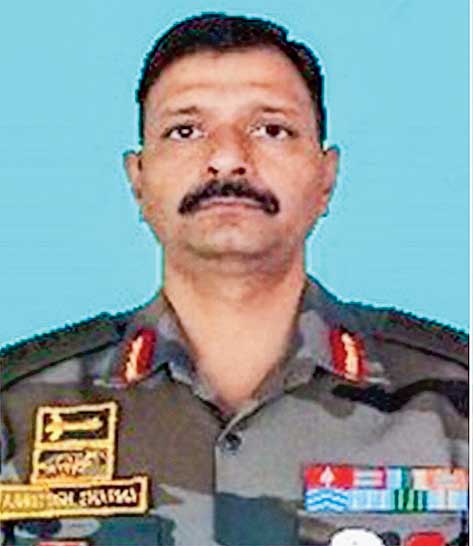 A colonel and a major were among five security personnel killed in a gunfight with militants in north Kashmir on Saturday night, marking the highest-ranking casualty in an operation in nearly five years.

Colonel Ashutosh Sharma, 42, headed the army’s 21 Rashtriya Rifles battalion — called “triple centurions” for killing over 300 militants. He is the second company commander of the unit — after Col Rajinder Chouhan in 2000 — to have been killed in action.

Police said Lashkar’s Pakistani commander Haider and another militant were killed in the encounter, which lasted till 1am.

A defence spokesperson said the army and the police had launched a joint operation after the militants had taken some civilians hostage in a house. “A team comprising five army and JK police personnel entered the target area occupied by the trts (terrorists) to evacuate the civ(ilians). The team of army and JK police entered the tgt (target) area and successfully extricated the civ(ilians),” the spokesperson said in a statement.

“However, during the process, the team was subjected to heavy volume of fire by the terrorists. In the ensuing fire fight two terrorists were eliminated and the team of five army and JK personnel comprising of two army officers, two army soldiers and one JK police sub-inspector attained martyrdom.”

Army officials said the operation in the Rajwar forests of Handwara began on Friday after a tip-off about the presence of militants. Sources said the militants had escaped to the nearby Changimulla village and taken shelter in the house of a carpenter, Abdul Khaliq Najar, before the encounter resumed on Saturday around 3pm with a heavy exchange of fire.

When the guns fell silent on the other side for about an hour, the colonel and the four men entered the house where the militants were hiding. It was 5.30pm. The forces soon lost contact with the five as more shots rang out.

The army suspected something had gone wrong after a militant responded to calls on the mobile number of a security personnel.

The army rushed elite commandos to the area but the sources said darkness and rain hampered the operation.

Maimuna Begum, a widow who lives a few yards from Najar’s home, said the forces had entered the house apparently under the impression that the militants were dead. “They got in and were fired upon and killed,” Begum told The Telegraph over the phone.

Village head Mohammad Abdullah Lone said that at 7am on Sunday, the forces directed him to go to the encounter site and find out what had happened.

“I was reluctant but they forced me to go. I took some local people along. There we saw five bodies (of the security force personnel) lying close to the house but not inside. Then we went inside and saw the bodies of two militants in the upper storey,” Lone told this newspaper. “We informed the forces, after which they entered the village.”

Col Sharma, who was from Rajasthan, had won the Sena Medal twice – in 2018 and in 2019 — a rare feat for any officer. He leaves behind his wife and a 12-year-old daughter.

Pune resident Major Anuj, 31, is survived by his wife.

Prime Minister Narendra Modi paid tributes to the slain men and said “their valour and sacrifice will never be forgotten”.

Col Chouhan died in 2000 while accompanying Brigadier B.S. Sher Gill on an inspection tour of units in the same area as Saturday night’s encounter. Their vehicle was blown to pieces, killing both.

Earlier, in January 2015, Col M.N. Rai, also of Rashtriya Rifles, died in an operation in south Kashmir. Col Santosh Mahadik was killed in November the same year near the Line of Control.