‘No institution in a constitutional democracy is perfect’ 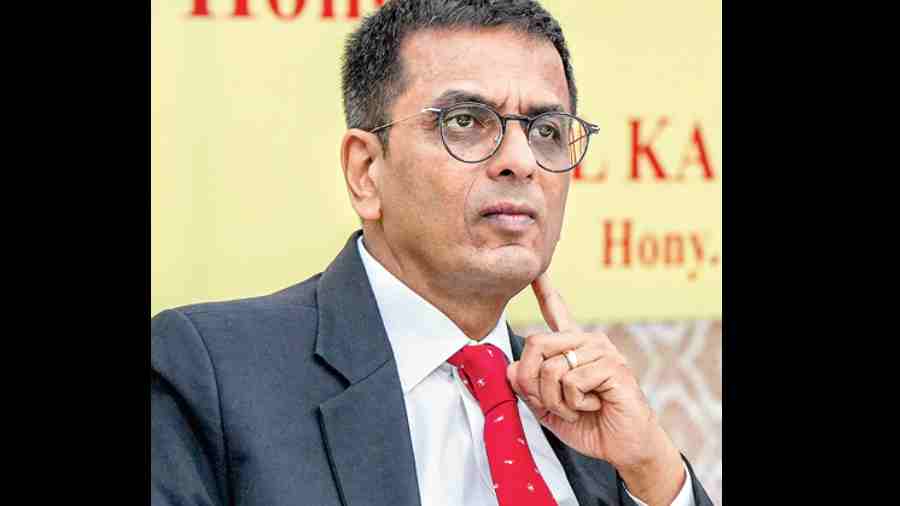 Chief Justice of India D.Y. Chandrachud on Friday defended the collegium system of appointing judges, speaking in the presence of Union law minister Kiren Rijiju who had a fortnight ago accused the system of opacity and “intense politics”.

Justice Chandrachud was speaking at an event organised by the Supreme Court Bar Association (SCBA) as part of Constitution Day celebrations. It was on November 26, 1949, that the Constitutent Assembly formally adopted the country’s Constitution.

Rijiju, who was present, struck a conciliatory note, saying: “We have not done anything to undermine the judiciary…. (The) independence of the judiciary is untouched. We are the offspring of the same parents. Whether it is the judiciary, legislature or executive, we should not fight among ourselves.” Justice Chandrachud said a new roster policy had been worked out to speed up bail hearings and clear the backlog.

“We want to ensure (that) bail matters are disposed of early as they involve the personal liberty of citizens,” he added. He also spoke of prioritising the hearing of criminal appeals, land acquisition matters and cases of compensation under the Motor Vehicles Act, saying these directly affected the fundamental rights of lakhs of citizens.

The CJI said that judges worked for a sense of fulfilment and not for salaries or perks which, he said, were transient and made up only a “fraction” of the fees earned by lawyers. He advised judges to motivate younger members of the Bar to join the judiciary. “Getting to be judges is not (about) how much salary you give judges. Yes, they should get better salaries…. (But) however high you pay judges, it will be a fraction of what lawyers make in one day,” he observed.

“Of course, you have to give better salaries because the cost of living has to be attended to when the children are growing up. I have brought up two children in a career spanning 22 years.” Senior advocate and SCBA president Vikas Singh said the government must give up its practice of delaying approvals for the recommendations made and reiterated by the collegium.

He said that while the Union government sometimes cleared the recommended names within 48 hours, in some other instances it sat on them for indefinite periods. Singh said the government must honour the collegium’s recommendations, particularly after they are reiterated.