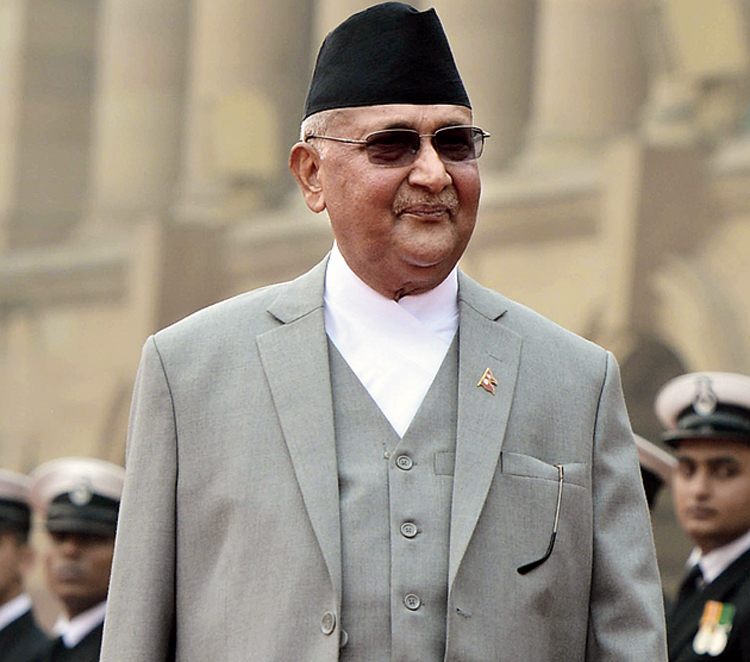 The timing of the decision to push for a vote on Saturday on the vexed issue at this point is being linked in certain quarters to Prime Minister K.P. Sharma Oli playing the nationalism card vis-a-vis India.
File picture
Anita Joshua   |   New Delhi   |   Published 23.06.20, 04:55 AM

Nepal is set to amend its citizenship law to make a seven-year wait mandatory for foreign women married to Nepali men before they acquire citizenship by naturalisation.

The renewed focus on the plan, in the current context of strained bilateral relations, is being seen as a way to undercut what Union defence minister Rajnath Singh last week described as the “roti-beti ka rishta (bread and daughter relationship)” with India. The amendment has been in the making for two years.

The proposed seven-year wait before naturalisation is being seen as an imitation of the provision in India for citizenship by registration for foreigners marrying Indians.

While the law is gender-neutral in India, men have to wait 15 years in Nepal under the existing and proposed provisions.

In Nepal, the proposed change does not enjoy the unanimous support that was received when a new map with three places in dispute with India was formalised.

All the three major Opposition parties in Nepal are opposed to the citizenship amendment. But the overwhelming majority that the ruling Nepal Communist Party has in the parliamentary state affairs and good governance committee helped it push through the amendment on Saturday after two years of deliberations.

The timing of the decision to push for a vote on Saturday on the vexed issue at this point is being linked in certain quarters to Prime Minister K.P. Sharma Oli playing the nationalism card vis-a-vis India.

Nepali sources, however, said not too much should be read into this development as the changes have been in consideration for two years and also because the proposed law is country-neutral, applying to women from any country. There are a number of matrimonial alliances between Tibetans and the hill people, it was pointed out.

The Opposition Nepali Congress, Samajbadi Party Nepal and Rashtriya Janata Party Nepal are opposed to this provision and have billed it unconstitutional. Their contention is that it goes against the existing provision.

It is an almost natural reaction to such an amendment from the two Madheshi parties — the Samajbadi Party Nepal and Rashtriya Janata Party Nepal. The Madheshi region in the plains has a sizeable population with Indian ancestry.

But it is much more of a slippery ground for the Nepali Congress, given its sizeable constituency in the hill areas which dominate the political landscape although the Terai plains account for more than half of Nepal’s population.

Even within the ruling Communist Party, there is opposition from women members who have been demanding that the law be equal for men and women. Currently, foreign women can get naturalised in Nepal immediately after marriage while foreign men need to wait 15 years. The new amendment does not propose to change that, again treating men and women differently.

While deferring the time of naturalisation by seven years, the parliamentary committee has made a provision under which foreign women married to Nepali men will be given an identity card of a permanent resident which will allow them to have economic, social and cultural rights till they get naturalised citizenship.

India has not commented on the amendment but will in all likelihood be watching the Terai region closely to see how the Madheshis — whose political representatives had refused to be part of the constitution-making process in 2015 and had carried out an economic blockade in protest — respond on the ground to a decision that affects them the most.