'The one-point agenda of the government is that education reaches the fewest possible youths, because this fascist trend cannot run on reason' 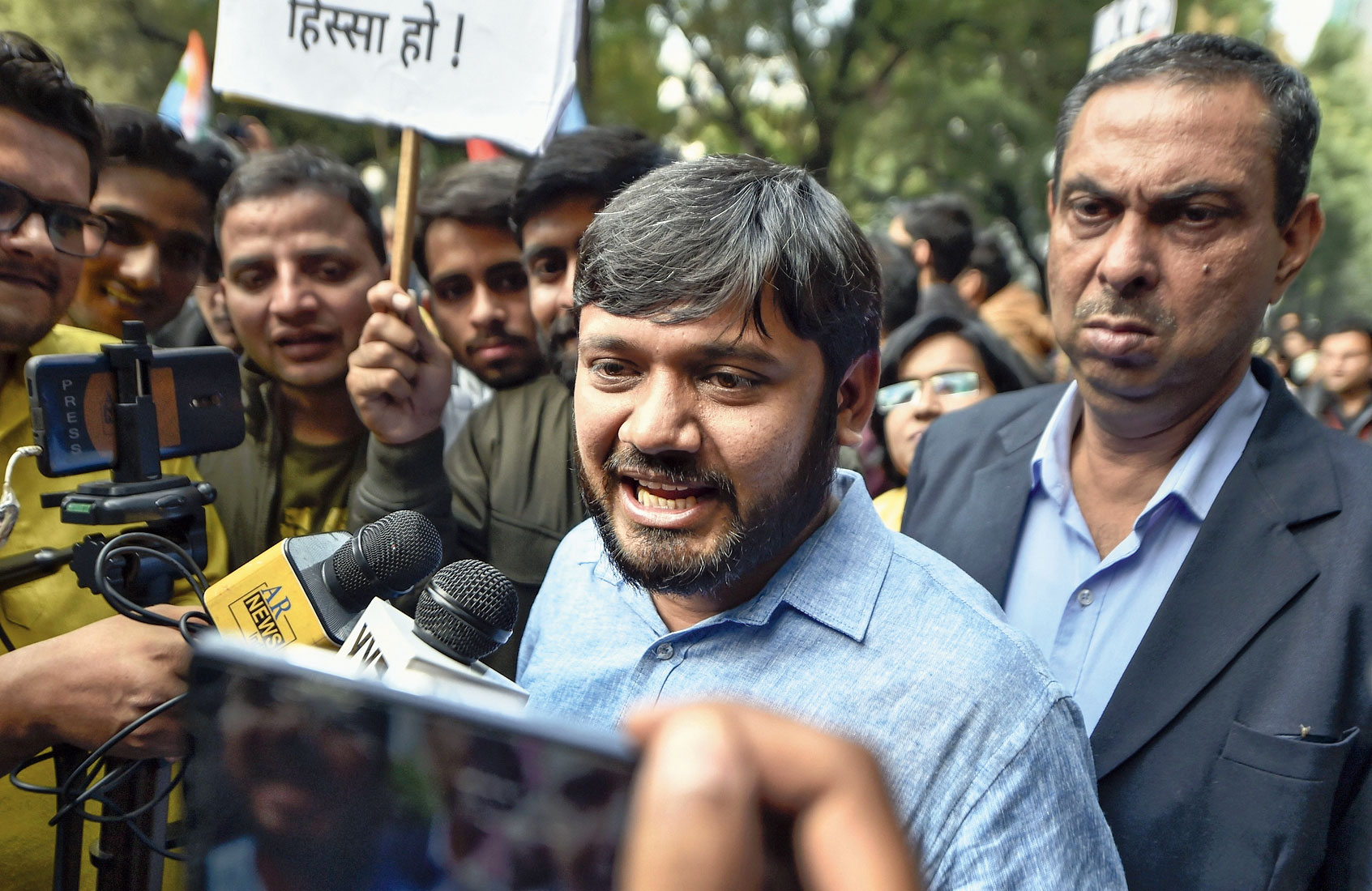 Hundreds of people joined a “Citizen’s March” on Saturday in support of a four-week-long agitation by students of Jawaharlal Nehru University against a hostel fee hike, the demonstration attracting political parties and their fronts, students from neighbouring states and others worried about rising education costs.

“The one-point agenda of the government is that education reaches the fewest possible youths, because this fascist trend cannot run on reason,” CPM general secretary Sitaram Yechury, a former president of the JNU Students’ Union, said at the end of the rally.

“If youths study, then arguments will emerge; these arguments will be the basis of questions, and if questions are raised then the recitation of stories from the Mahabharat and the Ramayan, in place of history, will stop.”

Yechury, speaking beside Parliament Street police station —where Bhagat Singh and Batukeshwar Dutt were kept under arrest after bombs exploded at the Central Legislative Assembly in 1929 — quoted Bhagat Singh’s reply when questioned about the motive for the attack.

“If the deaf are to hear, the sound has to be very loud,” Bhagat Singh had said.

“Today you are close to Parliament, but your voice must reach there and Parliament must also make this deaf Modi government listen, and teach them that they must withdraw this policy or you will be dethroned by us.”

The student strike against the fee hike that has doubled hostel charges — beyond the reach of 40 per cent of boarders — has led to several officials being gheraoed and administrative offices defaced.

Students have confronted police and face three FIRs while police action on a student march on Monday left several students, a teacher and a journalist badly injured.

“It is a fight between those who have bought degrees and those who have actually studied… I came here because my sisters were beaten up by police after turning the streetlights off. A blind student, Shashibhushan Pandey, was hit by police. I ask them, don’t your children study too? Your job is to protect the Constitution. Don’t do anything that will lead to retribution. These youths will be in government soon.”

JNUSU president Aishe Ghosh reminded the gathering — estimated to be around a thousand strong — that a student movement had led to deprivation points in admission for those from the marginalised sections in 1973, before the Mandal Commission was formed in 1979.

“When JNU started it was elitist in nature. It drew students from St. Stephen’s and Lady Shri Ram College. JNU students fought to make it more inclusive and as a result the majority come from small towns and poor families…. Our struggle against high fees that will push these people out has now extended to the whole country,” she told The Telegraph.

The JNUSU has called upon all student unions to observe a national protest day in defence of affordable and accessible education on November 27.

Mukul Kumar, student association president at the All India Institute of Medical Sciences, told this paper: “Today it is JNU, next time it may be the AIIMS. If MBBS students are charged fees according to the actual financial requirement, a large share of the population cannot get medical education. We are able to study medicine today because of public funding and it is our duty to ensure that all deserving students can study.”

“They want people like me, who couldn’t speak a sentence of English when I joined JNU, not to get in any more,” said former BJP MP Udit Raj.

Ashish Mathew Koshi, an event management professional who had joined the march, told this paper: “I saw pictures of people beaten up badly in the earlier march. Why can’t we walk on Delhi’s streets without being beaten up? Lawyers beat up cops and the police protested. Now the police go and beat up kids who don’t want high fees in a public university. I paid Rs 800 per semester in college. They’re not getting some five-star food in JNU to be charged so much.”

CPI national council member Kanhaiya Kumar told this paper: “To grab a widow’s land she is first defamed as being of easy virtue, or a witch. Similarly, JNU is defamed as a den of vice and terror for the government to capture its intellectual space.”

A three-member panel the central government has set up to resolve the fee-hike row has met JNU students and teachers and is expected to submit its report to the government early next week.