Advertisement
Home / India / China says latest round of talks with India on border issue 'positive and constructive'
60,000 troops of both sides present along LAC currently

The border issue is a matter between two countries, and both sides oppose interference from third party 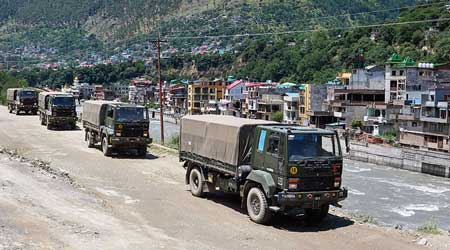 The eastern Ladakh border standoff between the Indian and Chinese militaries erupted on May 5, 2020, following a violent clash in the Pangong lake areas
File picture
Our Bureau, PTI   |   Beijing   |   Published 27.01.22, 08:08 PM

China on Thursday described as "positive and constructive" the latest round of military-level talks with India and said Beijing will work closely with New Delhi to "properly handle" the border issue even as it refuted the US allegation of "intimidating" neighbours.

India and China held the 14th round of Corps Commander-level meeting on January 12 during which the two sides agreed to maintain dialogue through military and diplomatic channels to work out a "mutually acceptable resolution" of the remaining issues of the standoff at eastern Ladakh.

"The Chinese side believed this round of talks were positive and constructive, and China will work closely with the Indian side to properly handle the border issue through negotiation and consultation," said Senior Colonel Wu Qian, a spokesperson for China's Ministry of National Defence said in response to a question.

Ahead of the talks, Indian officials expressed hope of resolving issues related to disengagement at Patrolling Point 15 (Hot Springs) in eastern Ladakh in the 14th round of talks. The eastern Ladakh border standoff between the Indian and Chinese militaries erupted on May 5, 2020, following a violent clash in the Pangong lake areas.

As a result of a series of military and diplomatic talks, the two sides completed the disengagement process last year in the north and south banks of the Pangong lake and in the Gogra area. Each side currently has around 50,000 to 60,000 troops along the Line of Actual Control (LAC) in the sensitive sector.

Sr. Col. Wu in his press briefing on Thursday sharply criticised White House Press Secretary Jen Psaki's comments accusing China of attempting to intimidate its neighbours ahead of the India-China military talks. Responding to a question on China's aggressive behaviour on the border with India, Psaki said on January 12 that the United States continues to monitor the situation.

"We continue to closely monitor the situation. We continue to support dialogue and peaceful resolution of these border disputes, she said. "We've been pretty clear how we view Beijing's behaviour in the region around the world. We believe it can be destabilising, and we're concerned by the PRC's (People Republic of China) attempt to intimidate its neighbours, she said.

"We'll continue to stand with our partners on that," Psaki underlined. Reacting to Psaki's remarks, Sr. Col. Wu said some American politicians are so fond of using the word coerce and they seem to have forgotten that the US is the inventor and master player of coercive diplomacy.

"The China-India border issue is a matter between the two countries, and both sides oppose the interference from a third party, Wu was quoted as saying by the Chinese Defence Ministry's official website. He reaffirmed China's clear-cut position that China neither "coerces" nor is "coerced" by others, and strongly opposes the US forcing "coercive diplomacy" on other countries, the report said.