China not shy of naming or warning India 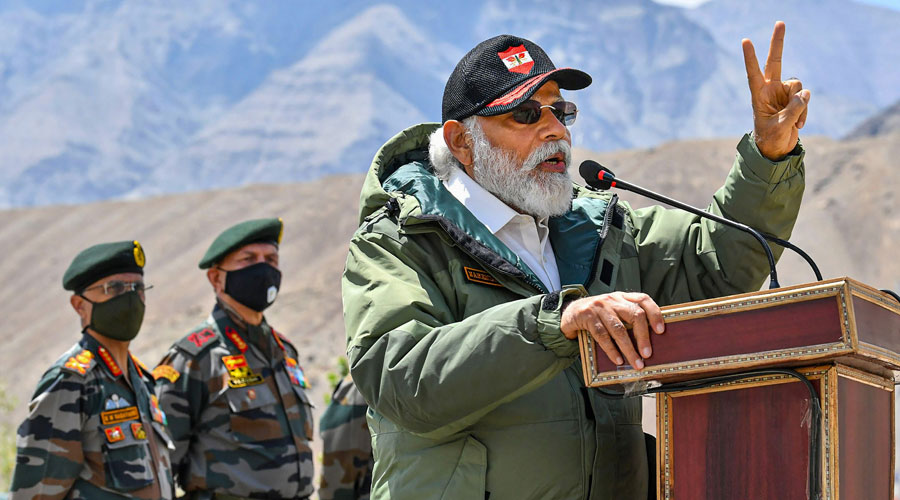 Prime Minister Narendra Modi’s Leh visit on Friday drew a flurry of statements from China, which warned against any strategic miscalculation or steps that could complicate the border situation and bit the bait on the “expansionist” charge although Modi had not named any country.

Government sources confirmed that foreign secretary Harsh V. Shringla had given a briefing on the border situation to the ambassadors of the US, France, Germany, Russia and Japan — which too is in the middle of a territorial dispute with China over the Senkaku Islands.

Although Modi went only up to Nimu, just 35km from Leh airport and nowhere near the Line of Actual Control, Chinese foreign ministry spokesperson Zhao Lijian said: “China and India are in communication with each other through military and diplomatic channels. Neither side should make any move that may complicate the border situation.”

Zhao was responding to a question on the visit during the routine foreign office briefing. In the same briefing, he also warned India against making any strategic miscalculation with regard to China.

He said this in response to a question relating to India’s decision to ban 59 Chinese apps in the wake of the border face-off.

Zhao, however, stressed the consensus between the two leaderships — something India too invokes often enough. “I would like to stress that China hopes that India will work with us, follow faithfully the important consensus reached between the two leaders, abide by the agreements reach between the two governments, strengthen communication and coordination on properly managing the current situation through diplomatic and military channels, and jointly uphold peace and stability in the border areas.”

“At the same time, we need to see that China and India, both major developing countries, bear the historic mission of accelerating national development and rejuvenation. Hence, acts of mutual respect and mutual support represent the right track and also conform to the long-term interests of both countries, whereas those of mutual distrust and friction belong to an evil path and go against the fundamental aspirations of the two peoples.... India should avoid a strategic miscalculation with regard to China.”

Later in the evening, the Chinese embassy in Delhi responded to the Prime Minister’s address to the troops in Nimu, specifically his observation that the era of expansionism was over and that expansionists had either been defeated or forced to retreat.

Although Modi did not name any country, Chinese embassy spokesperson Ji Rong tweeted: “China has demarcated boundary with 12 of its 14 neighbouring countries through peaceful negotiations, turning land borders into bonds of friendly cooperation. It’s groundless to view China as ‘expansionist’, exaggerate & fabricate its disputes with neighbours.”

Earlier, the foreign secretary had briefed the Japanese ambassador to India, Satoshi Suzuki, on the LAC developments. While the external affairs ministry did not issue any readout, the ambassador himself tweeted: “Had a good talk with FS Shringla. Appreciated his briefing on the situation along LAC, including GOI’s policy to pursue peaceful resolution. Japan also hopes for peaceful resolution through dialogues. Japan opposes any unilateral attempts to change the status quo.”

Sources later confirmed that Shringla had already briefed the ambassadors of the US, France, Germany and Russia.