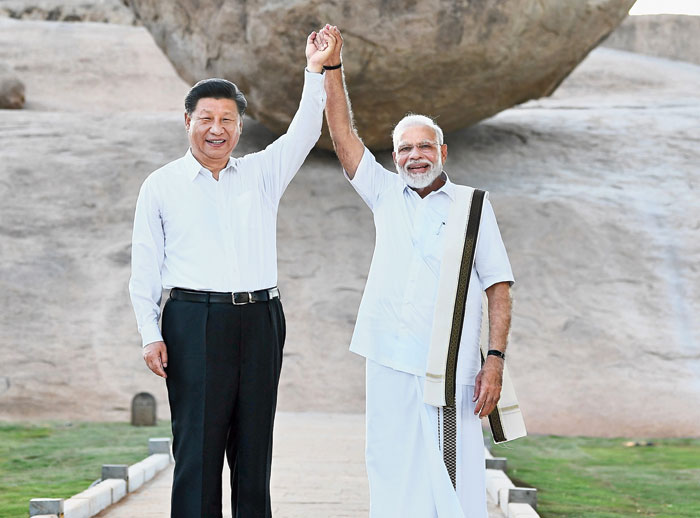 China on Thursday described the bifurcation of Jammu and Kashmir as a challenge to its sovereignty, triggering a sharp response from India and putting a question mark on Narendra Modi’s “Chennai Connect”.

Prime Minister Modi had used the phrase to describe his bonhomie with Chinese President Xi Jinping at their second informal summit in Mamallapuram earlier this month.

“The Indian government officially announced the establishment of the so-called Jammu and Kashmir and Ladakh Union Territories which included some of China’s territory into its administrative jurisdiction,” PTI quoted China’s foreign ministry spokesman Geng Shuang as telling the media in Beijing.

“China deplores and firmly opposes that. India unilaterally changed its domestic laws and administrative division challenging China’s sovereignty,” he said. “This is unlawful and void and this is not effective in any way and will not change the fact that the area is under Chinese actual control,” he added.

The statement came on the day the bifurcation of the state into two Union Territories came into effect. While China had objected in August itself, when the Modi government announced the state would be split, Thursday’s is by far the sharpest statement from Beijing on the decision.

Indian foreign ministry spokesman Raveesh Kumar responded in the same tone, stating that “China continues to be in occupation of a large tract of area in the Union Territories of Jammu and Kashmir and Ladakh” and the “illegally acquired” Indian territories from Pakistan-occupied-Kashmir (PoK) under the so-called China-Pakistan Boundary Agreement of 1963.

The bifurcation is an internal matter and India does not expect other countries, including China, to comment on such issues, Kumar said. He pointed out that New Delhi has consistently conveyed its concerns to both China and Pakistan on the projects in the so-called China-Pakistan Economic Corridor, which runs through PoK.

Through the verbal duel, both sides reminded each other of the need to abide by treaties — particularly the political parameters and guiding principles that were agreed in 2005 — and uphold peace and tranquillity in the border areas, besides creating favourable conditions for proper settlement of the boundary question.

Indian diplomats remained outwardly unfazed by the Chinese statement, maintaining that this is par for the course for a bilateral relationship that runs on two tracks. “Both sides have found a way to do business with each other while holding onto our positions on the irritants,” said an MEA official.