Advertisement
Home / India / Four generations of one family vs four years of a ‘chaiwala’: Modi's challenge to Congress

Modi addressed three election rallies, and the target at every speech was the Nehru-Gandhi family 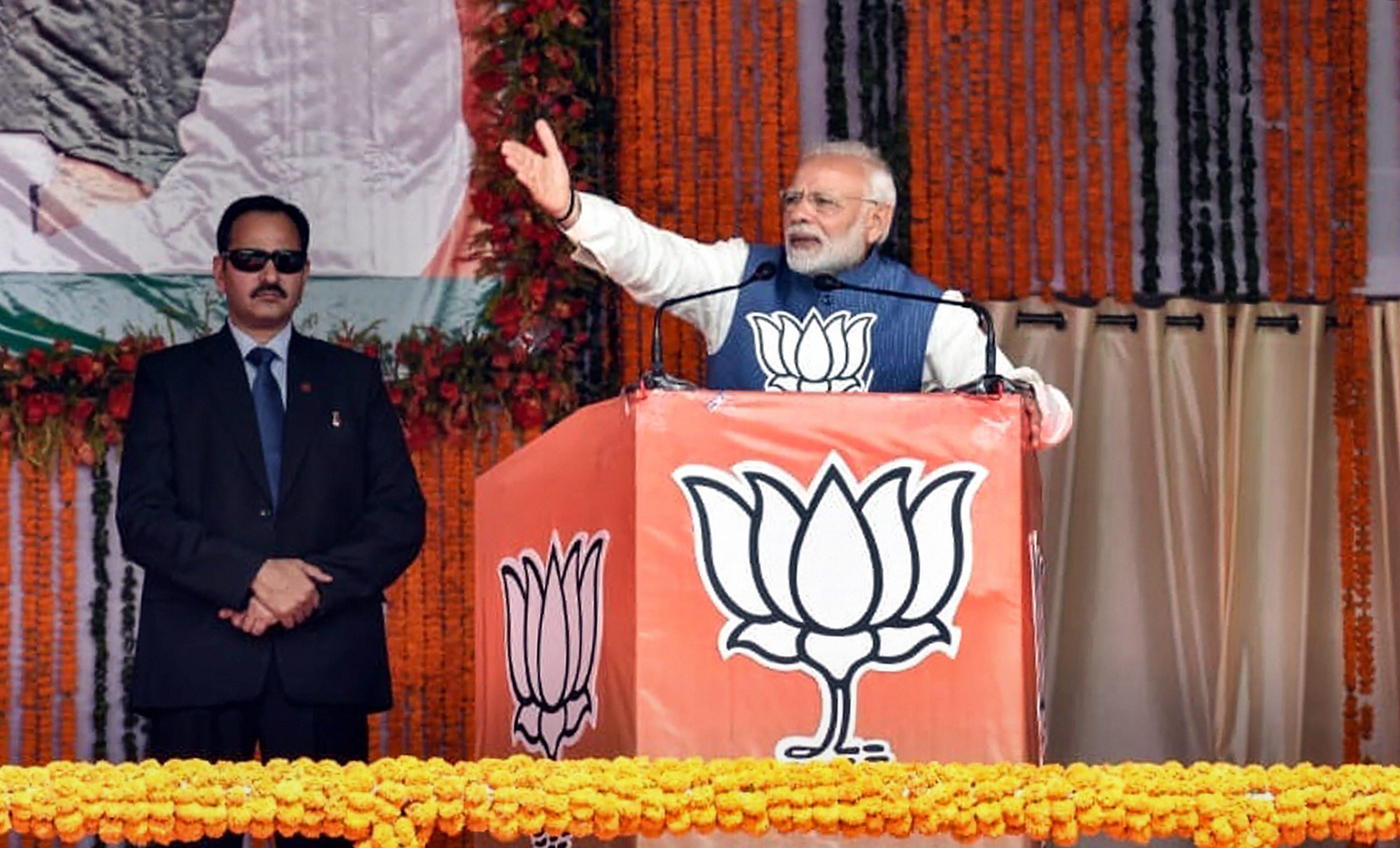 Narendra Modi addresses a rally for the second phase of the Chhattisgarh Assembly elections in Ambikapur on Friday.
PTI
Our Special Correspondent   |   New Delhi   |   Published 16.11.18, 09:42 PM

Prime Minister Narendra Modi vented ire at the Nehru-Gandhis, accusing them of making false promises, fooling the people and daring a “muqabla” (challenge) between “four generations of one family and four years of a ‘chaiwala’”.

Modi addressed three election rallies, one in Chhattisgarh and two in Madhya Pradesh. At every speech the target was the Nehru-Gandhi family. He started in Ambikapur of Chhattisgarh by daring the Congress to make someone outside the family as party president for five years and then he will believe that Jawaharlal Nehru created a truly democratic system.

“I challenge them. Let some good Congress leader who is not from the family become the party president for five years, then I will say that Nehruji really created a truly democratic system,” Modi said.

He went to portray himself as a humble “chaiwala” who was still not acceptable to the “parivar” who feel only they are entitled to address the nation from the ramparts of the Red Fort.

Modi appeared to be hitting back at Congress MP Shashi Tharoor’s comment who credited institutional structures created by Nehru that paved the way for a “chaiwala” to become the Prime Minister. “Only a chaiwala (tea-seller) can understand the feeling of what poor people go through, not those running around abroad,” Modi said.

The BJP, which has ruled Madhya Pradesh and Chhattisgarh for 15 years at a stretch, is believed to be battling simmering anti-incumbency.

Modi’s attack on four generations of the Nehru-Gandhis is being seen as an attempt to deflect attention from everyday matters. Ground reports have it that a large mass of voters in the two states is speaking for change. The Congress is the principal challenger in the two states.

Modi tried to draw a promise from the crowd that they would ask Congress leaders a question he would share with them.

“When they ask you why this road had not been built, you ask them what they had done in 55 years. Ask them: ‘You were around for four generations but why didn’t you do it? Did you lay water pipelines? Did your nana-naani, dada-dadi (grandparents) lay it? And did Raman Singh (the current chief minister of Chhattisgarh and BJP leader) come and destroy them?’” Modi said. “‘First you (the Congress) give us an account of why you did not do it and then come and ask us,’” he added.

In Shahdol, Modi repeated the message and recalled Indira Gandhi’s bank nationalisation and the “garibi hatao” slogan. Modi said Indira Gandhi nationalised banks in the name of the poor. “Did the poor get entry into banks?” he asked and claimed that bank accounts for the poor were opened only in the past four years.

“Your ‘dadima’ (grand-mother) said ‘garibi hatao’,” Modi said, seeking to address Rahul Gandhi. “Forty years have passed since then, is poverty over from the country?” he asked and accused the Congress of betraying the people with false promises.

Modi said the Congress managed to rule for four generations only on the basis of false promises and now the party stood completely exposed. “Can you trust the promises of such a party?” he asked the crowd and urged people to repose their faith in the BJP, claiming to be the only party which ushers in development without discrimination.

Modi credited both the Raman Singh government in Chhattisgarh and the Shivraj Singh Chouhan government in Madhya Pradesh of having transformed the two states in the past 15 years — something the Congress could not achieve in 55 years.

The Prime Minister urged the people not to commit the mistake of voting the Congress to power again.

He added that the “double-engine” strength of Modi at the Centre and the BJP governments in the two states would turn their states into “developed” ones in the next five years.