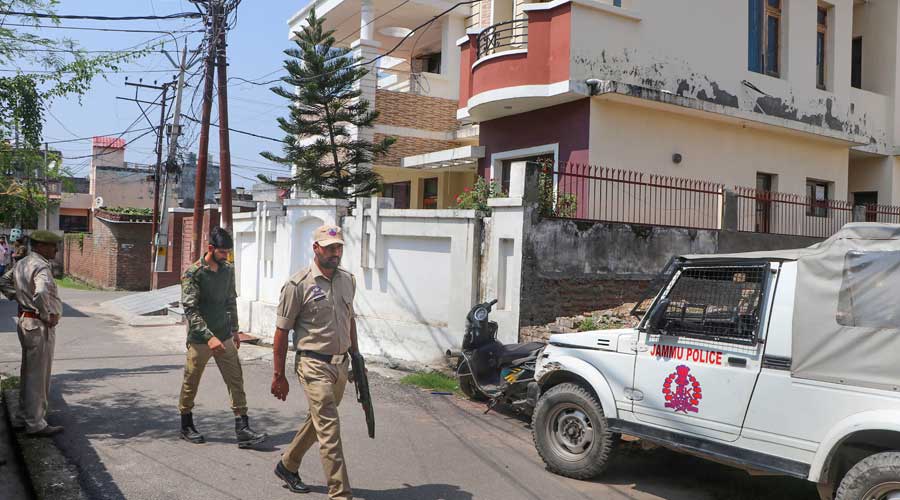 Police personnel deployed during a search by Central Bureau of Investigation (CBI) officials in connection with alleged irregularities in the recruitment process of sub-inspectors in the Union Territory, in Jammu, Tuesday, Sept. 13, 2022. The search operation was started at 33 locations.
PTI Photo
PTI   |   New Delhi   |   Published 13.09.22, 10:00 AM

The CBI Tuesday started a search operation at 33 locations, including the premises of ex-Jammu and Kashmir SSB chairman Khalid Jahangir, over alleged irregularities in the recruitment process of sub-inspectors in the Union Territory, officials said.

The premises of Jammu and Kashmir Services Selection Board (JKSSB) Controller of Examinations Ashok Kumar are also being searched, they said.

The searches are spread across Jammu, Srinagar; Karnal, Mahendergarh, Rewari in Haryana; Gandhinagar in Gujarat; Delhi; Ghaziabad in Uttar Pradesh and Bengaluru in Karnataka.

This is the second round of searches conducted by the CBI in connection with its probe into alleged irregularities, they said.

"The Central Bureau of Investigation (CBI) has registered a case on the request of the Jammu and Kashmir administration against 33 accused... on the allegations of irregularities in written examination for the posts of Sub-Inspectors in the J&K Police on 27.03.2022, conducted by J&K Services Selection Board (JKSSB)," the CBI said on August 5 after registration of the FIR.

The exam results were declared on June 4 this year after which allegations of malpractices in the examination surfaced. The Jammu and Kashmir administration constituted an inquiry committee to look into the charges.

"It was alleged that the accused entered in conspiracy amongst officials of JKSSB, Bengaluru-based private company, beneficiary candidates and others, and caused gross irregularities in the conduct of written examination for the posts of sub-inspectors. It was further alleged that there was an abnormally high percentage of selected candidates from Jammu, Rajouri and Samba districts," the CBI has said.

JKSSB had allegedly violated rules in outsourcing the setting of question papers to a Bengaluru-based private company, the probe agency had said.