Advertisement
Home / India / Can you dedicate your first vote to soldiers who carried out airstrike in Balakot: Narendra Modi

Can you dedicate your first vote to soldiers who carried out airstrike in Balakot: Narendra Modi 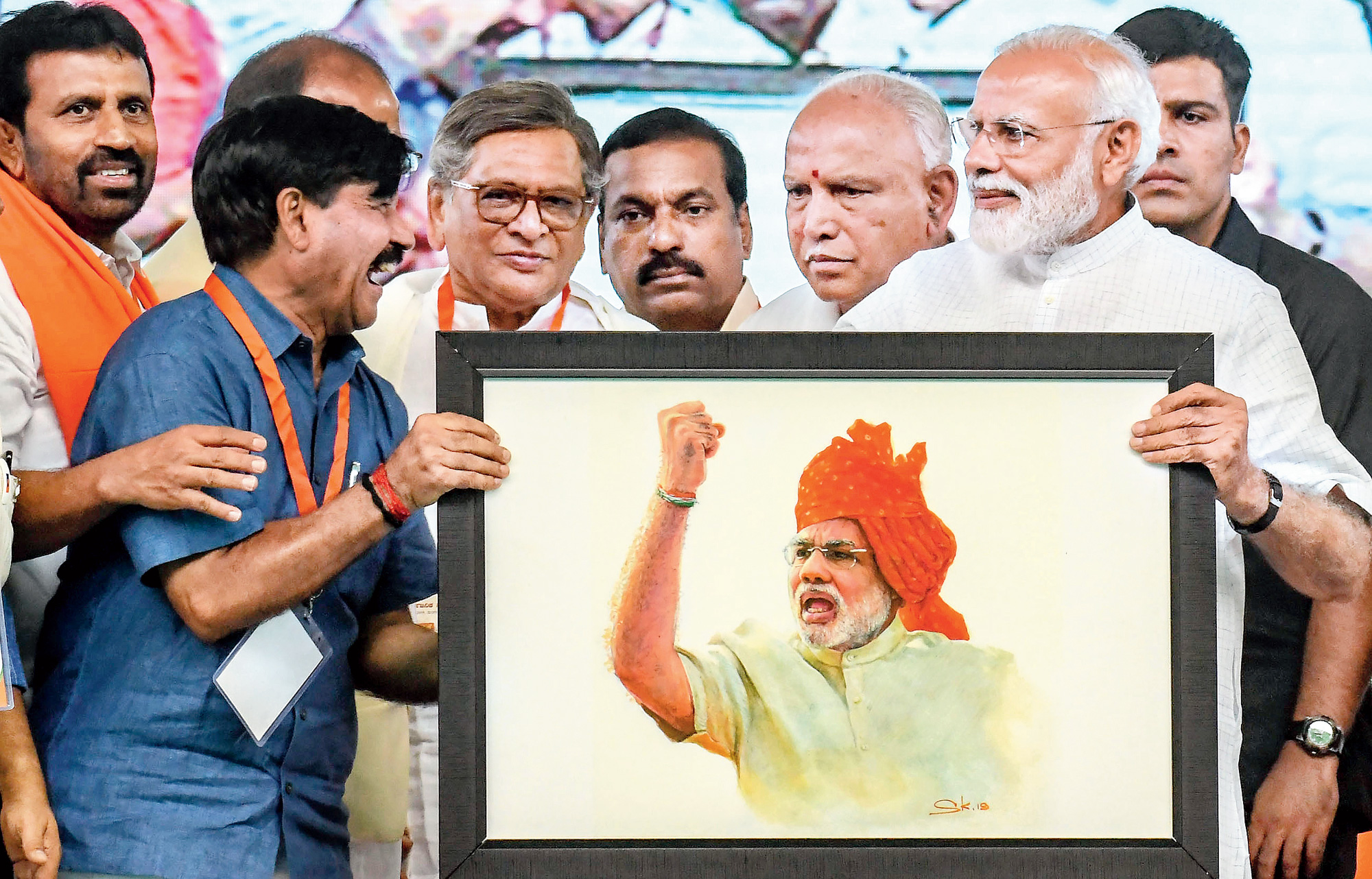 How’s the joke, Sir? A guffawing admirer and a more restrained Prime Minister hold a telling portrait during an election rally in Mysore on Tuesday.
PTI
TT Bureau   |   New Delhi   |   Published 10.04.19, 12:48 AM

Prime Minister Narendra Modi capped the first phase of campaigning on Tuesday by asking first-time voters to dedicate their votes to the Balakot air-strike soldiers and the jawans who were killed in Pulwama.

The Election Commission has taken cognisance of Modi’s remarks and has sought a report from poll officials in Maharashtra, PTI quoted officials as saying. The commission had asked parties to keep out of campaigning the activities of the defence forces.

Modi shed any pretence of restraint less than 24 hours after several retired bureaucrats expressed anguish at the “weak-kneed” response of the poll panel to complaints of violations of the model code of conduct, especially those linked to the Prime Minister.

Modi invoked the air strikes and the Pulwama massacre twice on the last day of campaigning for the first phase of the Lok Sabha elections — first in Maharashtra and then in Karnataka.

In Maharashtra’s Latur, Modi told a rally: “I wish to address the first-time voters today from the holy land of Chhatrapati Shivaji. My first-time voters, you must have seen that in several of our families, when the son or daughter gets the first salary or earnings from their first venture, what do the sons and daughters of our country do?

“The first-time earnings or salary they do not keep for themselves. They will think that the first income should be placed at the feet of the mother or donate it to their revered deity’s temple. Or it will be given to the little sister. Even now it happens, isn’t it? We give away our first salary, don’t we? This is the tradition in our country.”

With the first salary preamble in place, Modi came to the heart of the matter.

“I wish to ask you, my nation’s first-time voter, to take a decision. Your first vote, a historic moment in your life… you will always remember when you cast your first vote, where you cast it and for whom. You will remember this your whole life.

“I wish to ask you, my first-time voter, can you dedicate your first vote to the valiant soldiers who carried out the air strike in Pakistan’s Balakot?

“I wish to ask my first-time voters, can you dedicate your first vote to the brave martyrs of Pulwama?”

Modi went on to seek votes in the names of those who build homes for the poor and those who irrigate farmers’ land and promote the government’s health scheme. “This time, your vote should be cast for the country, for the country alone…. For a strong government,” he added.

However, just in case anyone missed the point and pressed the wrong button, the Prime Minister made it crystal clear what he meant by voting for the country. “If you press the lotus button or the bow and arrow (the election symbol of ally Shiv Sena), your vote will go straight to the account of Modi,” the Prime Minister said.

Later in the day, Modi made more or less similar comments in Karnataka.

The CPM wrote to the Election Commission alleging violation of the model code. “With deep anguish we are drawing your attention to the latest violation of Model Code of Conduct (MCC) by Prime Minister Narendra Modi. He is also violating the specific direction of the Election Commission to refrain from invoking the armed forces for seeking votes,” CPM politburo member Nilotpal Basu said.

Congress leader Kapil Sibal said the “sad part” was that the Election Commission was not doing anything about it.

The Election Commission on Tuesday directed Doordarshan to “desist” from extending any preferential or disproportionate airtime coverage in favour of any party, PTI adds.

The commission had recently issued a showcause notice to DD News for showing Prime Minister Narendra Modi’s Main Bhi Chowkidar programme for nearly an hour after Opposition parties complained that the national broadcaster was being biased.

In its reply, DD News had reportedly said the BJP has got maximum time on its news slot, followed by the Congress, since the Lok Sabha polls were announced.

In a strongly worded letter to the information and broadcasting ministry secretary, the commission said: “It was noted from the report that the airtime coverage given to various political parties is disproportionate and not balanced, which is not in accordance with the principle of maintaining neutrality and a level playing field, especially in the context of the provisions of MCC.”