Campus lessons: Azadi and the importance of dissent

Unlikely heroes forced to step up over issues like government funding, gender and caste 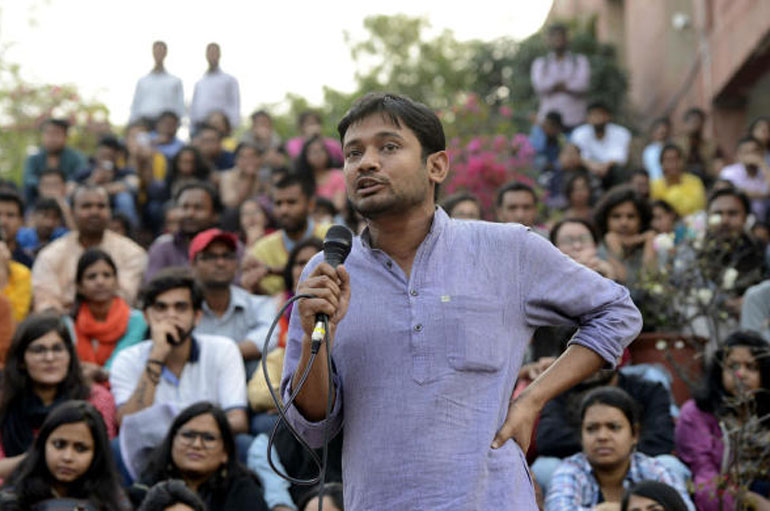 Perhaps the most defining image of resistance to the Narendra Modi regime is that of then Jawaharlal Nehru University (JNU) Students’ Union president Kanhaiya Kumar leading students to raise the infectious chant of “azadi” (freedom) after his release on bail following his arrest on sedition charges.

When most of the electoral Opposition was still recovering from the crushing 2014 defeat, student movements generated momentum for challenging the BJP’s ideology.

The first spark came for the Film and Television Institute of India (FTII). The state-run film school had a 139-day strike in 2015 after yesteryear actor Gajendra Chauhan was made chairman. Chauhan’s main qualification — besides playing Yudhishthir in the Mahabharat TV series in the ’80s — was that he is a member of the ruling party.

The protest against the appointment of Chauhan turned into a broader agitation over funding of education, and the deterioration of premier public institutions.

Later that year, after the University Grants Commission (UGC) announced a rollback of the fellowship paid to MPhil and PhD students, a protest in front of the UGC by JNU students became a movement until the scholarships were restored.

Gender and caste also came to the fore in 2015. A stir against a night curfew for women hostellers evolved into a group called Pinjra Tod (Break the Cage) that organises non-violent disobedience campaigns against unequal hostel timings for women. Indian Institute of Technology-Madras — often seen as one of the last bastions of Tamil Brahmins — saw outrage against the banning of the Ambedkar Periyar Study Circle, a student group that spoke out against casteism.

However, it was Vemula Rohith Chakravarthy’s suicide on January 17, 2016, that finally put the State on the back foot. Vemula, leader of the Ambedkar Students’ Association, hanged himself after being suspended from the University of Hyderabad hostel along with three other Dalit activists after a clash with his Akhil Bharatiya Vidyarthi Parishad (ABVP, the students’ wing of the RSS) counterpart Susheel Kumar. Vijay Kumar Pedapudi, who was suspended with Vemula, is contesting on a BSP ticket in the Andhra Pradesh Assembly polls.

A government probe saying that Vemula was not a Dalit ended up adding fuel to the Dalit rage that spread to other varsities.

Less than three weeks later, three JNU students were arrested after the ABVP and a party MP complained that the trio had raised seditious slogans for the independence of Kashmir from India, a charge later found to be false by a magisterial probe.

A nationwide slander campaign followed. The defence campaign saw thousands of students, intellectuals and Opposition politicians hold repeated marches in Delhi to scrap the sedition case, which is yet to go to trial.

Kanhaiya is contesting on a CPI ticket from Bihar’s Begusarai, and former JNUSU vice-president Shehla Rashid is now a leader of the newly floated Jammu and Kashmir People’s Movement. The JNU spirit of real azadi — “against casteism, capitalism, and starvation” — with newer struggles against mob lynching of Muslims, and recruitment scams, set the tone for later movements of other varsities to find space in Delhi. These include the Banaras Hindu University’s agitation against sexual harassment in 2017, and Delhi University’s stir against hooliganism by the ABVP.