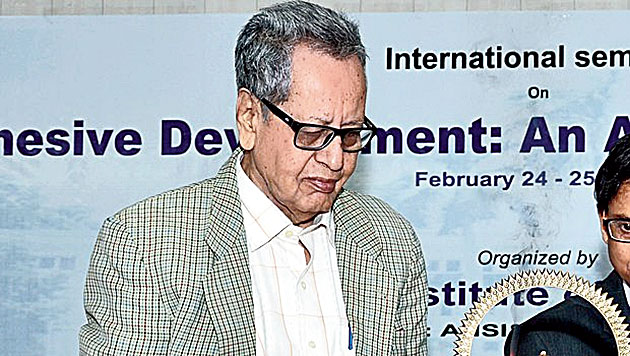 The doyen among Left economists, Professor Amiya Kumar Bagchi, sharply criticises the Economic Survey and the Union budget and also proposes an alternative set of priorities in this dialogue with Subhoranjan Dasgupta, Professor of Human Sciences.

Q: Perhaps the most disturbing statement in the Economic Survey reads: “Dalliance with socialism was an aberration”. How would you react to this statement?

A: My reaction would be — those who have prepared the Economic Survey are totally ignorant of history. Socialism or socialist economics is not the monopoly of the communists. Take one resounding example. After the Second World War, the Labour Party led by Clement Attlee came to power and this government nationalised all the basic services, including the railways. The nationalised railway service and system ran wonderfully while Labour governed. Problems began when the railway service was privatised, it turned frightfully expensive and inefficient.

Q: On the one hand, the Economic Survey brands socialism as an aberration. But, on the other hand, the finance minister declares that a hundred per cent profitable public sector corporation, the Life Insurance Corporation, which at¬tends to the welfare of mil¬lions, will sell a part of its shares. Isn’t there a blatant contradiction between these two standpoints? Why should a flourishing public concern wish to en¬ter the uncertain market?

A: Certainly, there is a basic contradiction. Why should the government explicitly dedicated to market economy snatch the bounty of a full and total public corporation to raise resources? In fact, the present rulers are determined to privatise anything and everything. They have aimed for the LIC, then they will encroach on the railway, iron and steel industry and then gas and energy. Ultimately, what will happen is tragic and frightening. The commanding sectors and heights of our national economy will be up for gr¬abs and the nation’s economic structure will collapse and fall apart. And, first and foremost, the poor will come to suffer the most when this helter-skelter privatisation gains force.

Q: The budget has simply ignored the roots and the nature of our severe economic crisis — sky-high unemployment, total drop in demand and consumption, utter lack of resources in the hands of citizens, complete blanket on investment by the private sector, etc. etc. But why this deafening silence?

A: It is this silence which prompts me to say, echoing (economist) Jayati Ghosh, that this budget is meaningless and misleading. The finance minister is unaware of the ABC of economics and, on top of that, her mission is to serve the corporate sector, if that is at all possible at the present juncture. I say this because employment in the formal sector has reduced to zero and even once successful big, private corporations like Maruti-Suzuki and Hyundai are shedding their workforce. Moreover, ordinary consumer goods, not only cars, are also being ignored by the common people whose pockets are simply empty.

In this sort of a dismal situation, immediate steps should be taken to increase the purchasing power of the common citizen. Indeed, one has to admit that the most favoured corporate sector is also not responding positively to the government’s overtures. Look at the real estate market as an example. It is drooping and dwindling. In a word, the ministry of finance along with its minister has proved to be the most incompetent, ignorant and inept. We all know that empty vessels sound most, and that is exactly the case here, with the budget turning out to be the longest in the history of free India cluttered with meaningless statements.

Q: I think we can claim that this budget has travelled a long distance away from the formation of a welfare state. Crucial budgetary grants on health and education have been reduced in ratio and in real terms. Even the allocation for hundred days’ work has decreased…

A: The Nehruvian ideal of a welfare state has been dumped into the dustbin. If you ask me what should be the crucial priorities at this inflammable moment, I would list the following: (i) offer basic incentives to the deprived and marginalised sections, Dalits, Adivasis and minority groups in particular; (ii) attend in a dedicated manner to the nutritional needs of women and children; (iii) open public health centres to serve the medical needs of the common people. Tamil Nadu has already shown the way in this sphere; (iv) provide opportunities to the student community, that is, increase the budgetary allocation for education instead of persecuting them; (v) take determined measures to reduce the dreadful inequality that is plaguing our country.

If these measures are not taken, the society will be in ruins when the present dispensation departs. As a corollary to this engulfing social malaise, the scope and extent of sheer violence will increase by leaps and bounds.

In conclusion, recalling the coupling of “socialism” with “aberration” in the Economic Survey, I shall say if socialism is an aberration, then our revered Constitution needs to be regarded as an aberration as well. Because the hallowed text rests on the twin pillars of socialism and secularism.