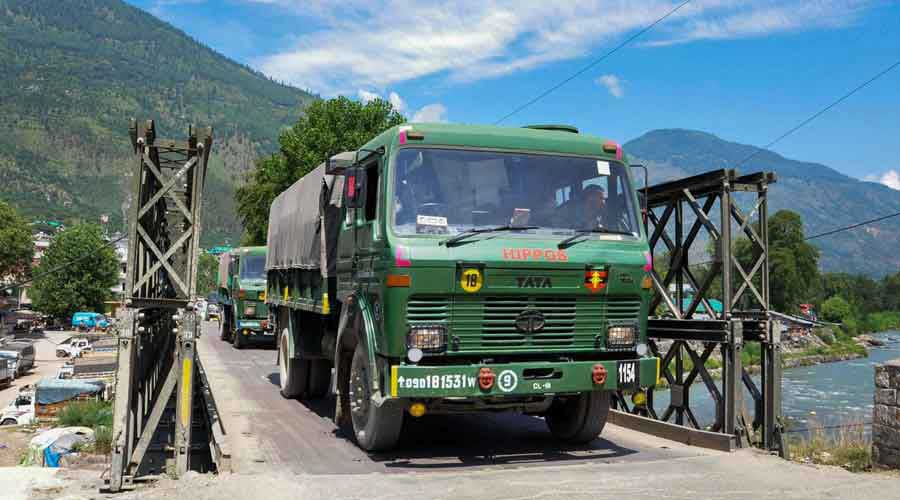 Although the Indian and Chinese armies have disengaged and moved back from their post-Galwan positions in several places, Chinese troops are said to have remained within some key India-claimed areas
File picture
Anita Joshua, Our Bureau   |   New Delhi   |   Published 29.09.22, 01:28 AM

Chinese ambassador to India Sun Weidong has said the border situation was switching to normalised management.

In comments made on Tuesday and made public on Wednesday, Sun made a strong pitch for New Delhi and Beijing to work together to create “the Asian Century”.

The reference to “normalised” management and a suggestion that the bilateral relations are already in recovery phase comes at a time several Indian military veterans have expressed fears that China would treat its intrusions in eastern Ladakh as the “new status quo” on the frontier.

Although the Indian and Chinese armies have disengaged and moved back from their post-Galwan positions in several places, Chinese troops are said to have remained within some key India-claimed areas.

In a keynote speech to mark the 73rd anniversary of the founding of the People’s Republic of China, Ambassador Sun said: “The phase of emergency response since the Galwan Valley incident has basically come to an end, and the border situation is now switching to normalised management and control.’’

Stating that China is willing to continue with the dialogue through diplomatic and military channels for a peaceful solution to the border issues, Sun brought in the “Taiwan question and Xizang (Tibet) related issues’’ to the table. Beijing is hopeful of India handling these core interests of China properly, he said.

The Chinese assessment appears to be that bilateral relations are already in recovery phase. “We should maintain the recovery momentum of bilateral relations, look forward and move ahead, so as to promote China-India relations back to the right track and ensure a long-term and steady relationship,’’ the ambassador said, referring to the processing of visas after a long break and also China arranging two charter flights in the past two months carrying 235 Indian businessmen back to Zhejiang province of China.

Pointing out that the volume of bilateral trade exceeded $120 billion last year despite the impact of the pandemic, Sun argued that the investments by Chinese enterprises in India have created a large number of jobs for the local people, and contributed to the economic development of India.

“It is hoped that the Indian side can provide an open, inclusive, fair and non-discriminatory business environment for Chinese enterprises. We believe that only when the roti is bigger, can it be shared with more people. Only when the plate is bigger, can it hold more rice. We should join hands to bake a bigger roti and make a bigger plate, to let more people benefit from it, rather than make the roti smaller or break the plate.’’

He urged Indian companies to participate in the fifth China International Import Expo in Shanghai in November,  adding that Beijing is willing to resume direct flights between the two countries at an early date to facilitate personnel exchanges.

From the beginning of the over two-year-long face-off, China has argued for keeping the border dispute in a silo while carrying on with the bilateral relationship. “For issues that can be resolved, we should actively seek solutions; for issues that cannot be resolved at the moment, we should put them in a proper place and manage them in a proper way, without allowing them to disturb the overall development of the bilateral relations,’’ he iterated.

Without naming the Quad (the four-nation strategic security dialogue), Sun also spoke against it. “We should oppose geopolitical conflicts, bloc confrontation and exclusive ‘small circles’.”

Army: Eye on rejig of customs