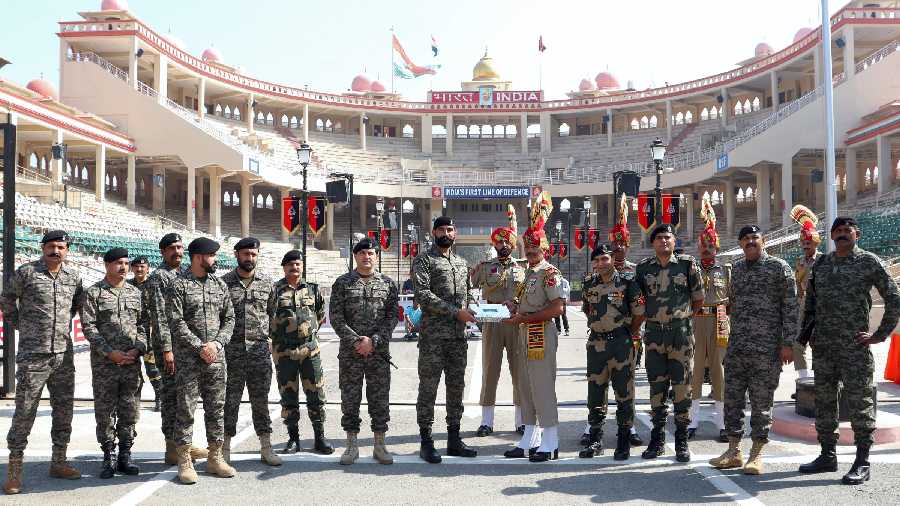 The Border Security Force and the Pakistan Rangers on Monday exchanged sweets at several border outposts along the International Border in the Jammu region and Punjab on Diwali.

The border guarding forces of India and Pakistan exchange sweets and wishes on various religious festivals such as Eid and Diwali, and also on their respective Independence Days.

Armies two sides also exchanged sweets at some forward posts along the Line of Control on the occasion.

"Today, on the occasion of Diwali, BSF and Pakistan Rangers exchanged sweets at various border outposts under the Jammu frontier in a very cordial atmosphere," a BSF spokesperson said.

It was done along the border outposts in Samba, Kathua, R S Pura and Akhnoor border, he said.

At the Attari-Wagah border, the BSF offered sweets to Pakistan Rangers on the occasion of Diwali, officials said.

A commandant-rank officer of the BSF, along with other personnel, gave sweets to the Pakistan Rangers at the joint check post.

Officials of both forces shook hands and exchanged pleasantries for a few minutes.

The spokesperson said the BSF has always been at the forefront of creating a peaceful and congenial atmosphere on the border while dominating it effectively.

"Such gestures (exchange of sweets) help build a peaceful atmosphere and cordial relationships on the border between both the border guarding forces," he said.