Advertisement
Home / India / Bombay High Court: Tablighi participants were made scapegoats
‘Smell of malice’ in action taken against the foreigners

The bench noted that while Maharashtra police had acted mechanically in the case, the state government had taken steps under ‘political compulsion’ 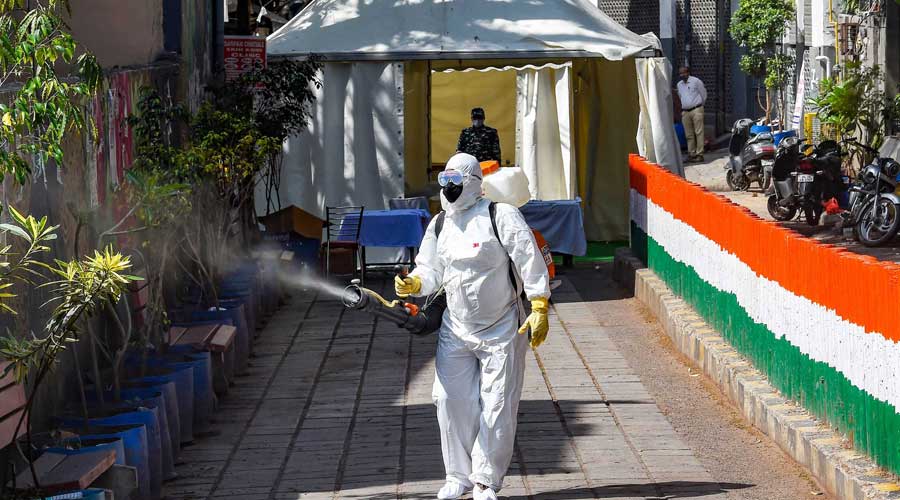 A health worker sanitises an area near Nizamuddin mosque after people attended the religious congregation at Tablighi Jamaat in New Delhi
PTI
Our Bureau And PTI   |   Mumbai   |   Published 23.08.20, 02:14 AM

Bombay High Court has said the government made scapegoats of the foreign nationals who attended the Tablighi Jamaat in Delhi in March by accusing them of spreading Covid-19, and that there was a “smell of malice” in the action taken against them.

“A political government tries to find a scapegoat when there is a pandemic or a calamity and the circumstances show that there is probability that these foreigners were chosen to make them a scapegoat,” the court’s Aurangabad bench said on Friday, quashing FIRs against 29 foreigners.

The latest figures on the spread of the infection in India show such action against the petitioners should not have been taken, the court said. The total number of Covid-19 cases in the country is now nearing 3 million.

A division bench of Justices T.V. Nalawade and M.G. Sewlikar noted that while Maharashtra police had acted mechanically in the case, the state government had taken steps under “political compulsion”.

The gathering of 2,300 people in mid-March was projected as a virus “super-spreader” in the initial days of the pandemic and its participants, and Muslims in general, vilified by the Right-wing ecosystem and sections of the media.

The Union health ministry had at one point said a third of Covid-19 cases in India could be linked to the gathering. The Union home ministry had directed all states to act against the Tablighi Jamaat participants and blacklisted the foreigners.

“The action of the central government was taken mainly against Muslim persons who had come to Markaz Delhi for Tabligh Jamaat. Similar action was not taken against other foreigners belonging to other religions,” the bench said.

The bench referred to the protests against the new citizenship regime.  “Most of the persons who participated in the protests were Muslims. It is their contention that (the) Citizenship Amendment Act, 2019, is discriminatory against the Muslims…. It can be said that due to the present action taken, fear was created in the minds of those Muslims,” it said. “This action indirectly gave warning to Indian Muslims that action in any form and for anything can be taken against Muslims…. Thus, there is smell of malice to the action taken against these foreigners and Muslim(s) for their alleged activities.”

The high court said: “It is now high time for the (authorities) concerned to repent about this action taken against the foreigners and to take some positive steps to repair the damage done by such action.”

The 29 foreigners who had appealed to the high court had been booked under various sections of the Indian Penal Code, Epidemic Diseases Act, Disaster Management Act and the Foreigners Act for allegedly violating their tourist visa conditions by attending the event at the Nizamuddin Markaz in Delhi.

The court asked if the people of India had acted in keeping with the country’s great tradition and culture of welcoming guests.

“During the situation created by the Covid-19 pandemic, we need to show more tolerance and need to be more sensitive towards our guests, particularly like the present petitioners,” it said.

Apart from the foreigners, the police had booked six Indians for giving shelter to the petitioners.

The bench recalled Swami Vivekananda’s address at the Parliament of Religions in Chicago in 1893, where he had praised and congratulated America for hosting such a gathering. He championed universal brotherhood and believed that all religions are true, the court said.

“We look towards America as an ideal democracy due to things like the aforesaid approach of America allowing the Parliament of Religions in that country. We have borrowed many principles and parts of the American Constitution, which include the Preamble, Fundamental Rights, independence of judiciary. All these things need to be kept in mind not only by the courts but also the executive before taking such action,” the court said.

The bench noted in its order that there had been propaganda against the foreigners who had joined the gathering Delhi.

“The propaganda against the so-called religious activity (Tablighi Jamaat) was unwarranted. The activity has been going on for more than 50 years and it is there throughout the year,” the court said, noting that Muslims from across the world come to India and visit the Markaz in Delhi as they are attracted to the reforms movement of the Tablighi Jamaat.