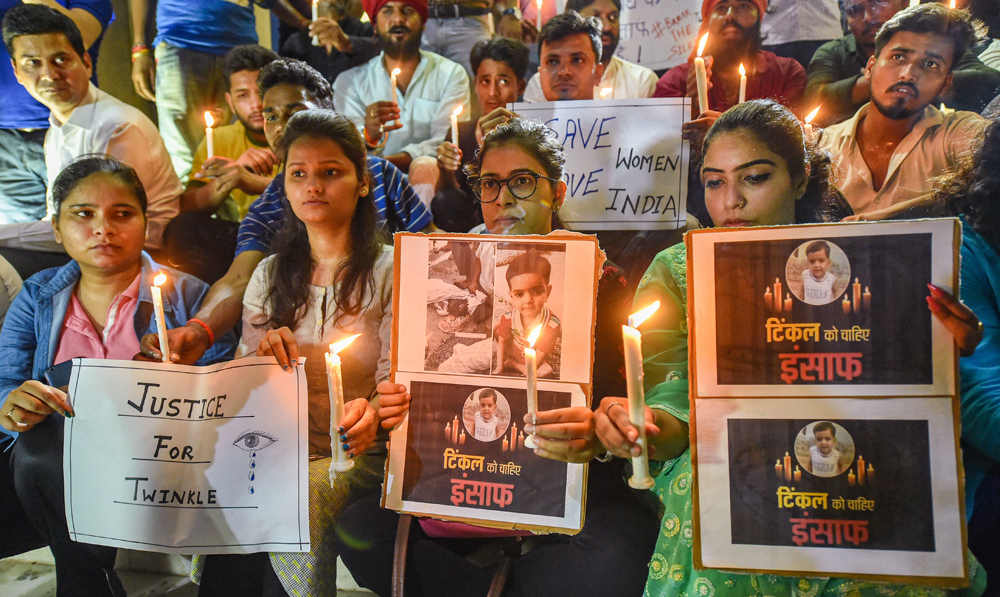 May 30: A two-and-a-half-year-old girl disappears in Aligarh

June 2: The baby’s mangled body found in a garbage dump near the suspects’ homes

Tweets from Bollywood celebrities have accomplished what a baby’s kidnapping and brutal murder could not: rouse the Uttar Pradesh administration to action.

Six days after a complaint about the possible kidnapping of a two-and-a-half-year-old girl, and four days after the discovery of her mutilated body, state authorities on Thursday suspended five Aligarh policemen for inaction on the prospective clues provided by her father.

The girl, daughter of a trader from the Kanugoyan locality of Tappal in Aligarh district, 450km west of Lucknow, had stepped out to play on the street on May 30 evening but did not return home.

After a futile, nightlong search, the father lodged a missing person complaint the following morning. He told the police he had had an argument with Mohammad Jahid and Mohammad Aslam of neighbouring Kot Mohalla earlier on May 30, and they had threatened him with “dire consequences”.

“I told the police my daughter could be saved if the duo’s homes were searched. But the police got active only on June 1 night after local people held processions and a candlelight march,” the father told reporters on Friday.

“The police picked up Jahid and Aslam on June 1 night but still ignored my demand to search their homes. On June 2 morning, my daughter’s body was found near their homes. She had been brutalised and murdered.”

A sweeper discovered the body in a garbage dump, a dog nibbling at it. It appears the police did not try to find out who had dumped the body.

Officers told reporters the preliminary post-mortem report says the baby was strangled to death before her body was “crushed” under some heavy object. The father blamed the police for the murder.

“Jahid and Aslam, who are relatives, had refused to repay me a loan of Rs 10,000. When I scolded them on May 30, they threatened dire consequences,” he said. He alleged that while Aligarh police were trying “to suppress the incident”, some local people highlighted it on social media and it caught the attention of Bollywood actors.

Angry, horrified, ashamed and deeply saddened beyond words at the barbaric rape of the three year old #TwinkleSharma. The rapist should be hanged in public. No other punishment is enough for this heinous crime. I demand #JusticeForTwinkleSharma . pic.twitter.com/7EwCTQxsUh

Actor Anupam Kher, known to be close to the state’s ruling BJP, posted a picture showing him holding up a sheet of paper demanding “justice” for the baby. “Angry, horrified, ashamed and deeply saddened beyond words at the barbaric rape…. The rapist should be hanged in public. No other punishment is enough for this heinous crime,” Kher tweeted on Thursday.

Fellow actor Akshay Kumar tweeted: “Horrified, upset and angry to know about baby…. This is definitely not the kind of world we want for our children. We need immediate and strictest punishment for such a heinous crime.”

He said Jahid and Aslam would be charged under the National Security Act, which allows detention without bail for up to a year. “A further probe is in progress,” he said.