5 die as police crack down on protesters 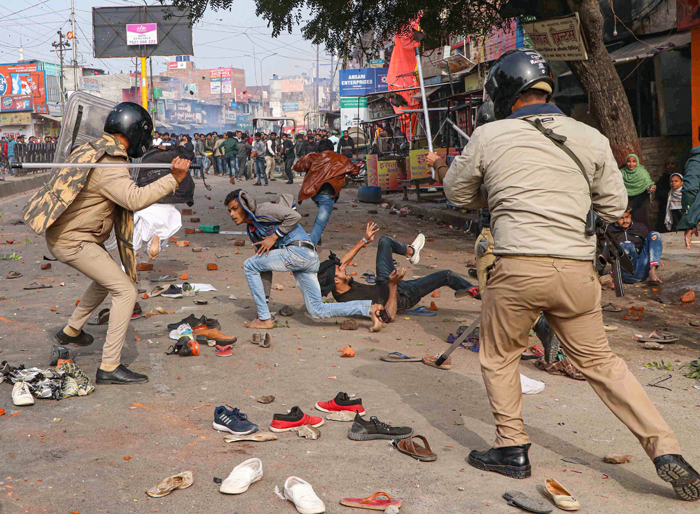 Police personnel baton charge at protesters during their rally against the NRC and the amended Citizenship Act that turned violent, in Lucknow, on December 19, 2019.
PTI
Piyush Srivastava   |   Lucknow   |   Published 20.12.19, 11:11 PM

Six people have died in BJP-ruled Uttar Pradesh since Thursday in police action on protesters against the amended citizenship law, amid allegations that the cops appeared to be doing their best to fan the fire and the behaviour of some of the most virulent marchers raising suspicions of stage-management.

The first death occurred in Lucknow on Thursday during the worst violence the city has witnessed since Partition. “I had never before in my life seen such intense clashes between people and the police in Lucknow. Nor had I seen such brutality by the police,” Pradeep Kapoor, a 64-year-old journalist from an old Lucknow family, said.

He said Lucknow had largely been free of communal violence, and had been relatively calmer even after the Babri Masjid demolition in 1992.

Five more people died in various parts of the state on Friday.

Although the protests against the citizenship law are being held across the country, with thousands marching peacefully, the only deaths so far have been reported from the BJP-ruled states of Uttar Pradesh and Karnataka.

A young man from Lucknow’s Aminabad area said the behaviour of some people in the crowd had left him puzzled.

“When I asked a man not to torch a bus, he started abusing me in foul language and asked me to get lost,” he said, declining to give his name.

During Friday’s follow-up demonstrations in Gorakhpur, two RSS members — Vikas Jalan and Satya Prakash — were seen among the mob, damaging shops and throwing stones at the police, a protester said.

The police’s role too has come under the scanner, with protesters across Uttar Pradesh alleging the force had gone all out to provoke peaceful marchers by caning and tear-gassing them, and even firing occasionally.

But the family of a young auto driver who died in Lucknow on Thursday have quoted eyewitnesses as saying a sub-inspector of police had shot him, prompting a mob to burn a police outpost.

Hospital authorities have admitted that Mohammed Vakil Ahmad died of a “firearm injury”, and that two others — including a schoolboy — were being treated for gunshot wounds.

Police sources said the victims included Nabi Jaan, 25, in Firozabad; Mohammad Sulaiman and Mohammad Anas in Bijnore; one man in Kanpur and another in Sambhal. A protester in Meerut told reporters that a man was seen dead in the Lisari area during the protests.

Residents said three people suffered bullet injuries in Kanpur but nobody was sure who had fired. Some protesters alleged the police had fired on crowds in Bahraich and Ghazipur. Lucknow was peaceful on Friday.

Irfan Kazmi, a young man from Lucknow’s Saadatganj locality and a relative of the wounded schoolboy, said he had spent the night in hospital and returned on Friday morning to find the police had taken away most of the youths from his locality.

He said he was told the police had ransacked homes, kicked women and shoved elders during the night raids.

“The police have failed to identify the actual culprits and are harassing innocent protesters,” was the verdict of Kapoor, the veteran journalist.

Kalanidhi Naithani, senior superintendent of police, Lucknow, said that over 100 people had been arrested for protesting violently “but we didn’t harass people during night searches”.

Irfan said he was happy that the Yogi Adityanath government had renamed the Mahatma Gandhi Crossing, where much of Thursday’s violence took place, after Atal Bihari Vajpayee a year ago.

“I’m happy that the place the violence erupted is no longer named after the apostle of non-violence,” he said.

Zubair Ahmad, law student and a friend of Irfan, said ordinary Muslims had been living in the Parvartan Chowk area “since the days of the Khilji dynasty in the 13th century”.

“When the Khiljis started killing the Mongol invaders, a large number of Hindus and Muslims fled the areas around Delhi and took refuge here, in what is now called ‘Old Lucknow’ or simply ‘Chowk’,” he said.

Lucknow woke up to another first on Friday morning — Internet services had been blocked for the first time since they were introduced in the late 1990s.

“We will consider unblocking Net connectivity after reviewing the situation at noon on Saturday,” the home secretary said.

In the Yatimkhana neighbourhood of Kanpur City, the police caned and tear-gassed marchers protesting after the Friday prayers, leaving 10 people injured.

At Nakhas in Gorakhpur, protesters wearing black armbands were caned. “I don’t know why they attacked us when they could have warned us to leave,” a protester said, requesting anonymity.

A police source in Lucknow said 120 protesters and 3 constables were injured in the state during Friday’s protests.