Advertisement
Home / India / BJP wants to finish off Shiv Sena as it does not want to share Hindu vote bank: Uddhav

BJP wants to finish off Shiv Sena as it does not want to share Hindu vote bank: Uddhav

Maharashtra CM says if Sena workers feel he is incapable of running the party, he is ready to resign as party president 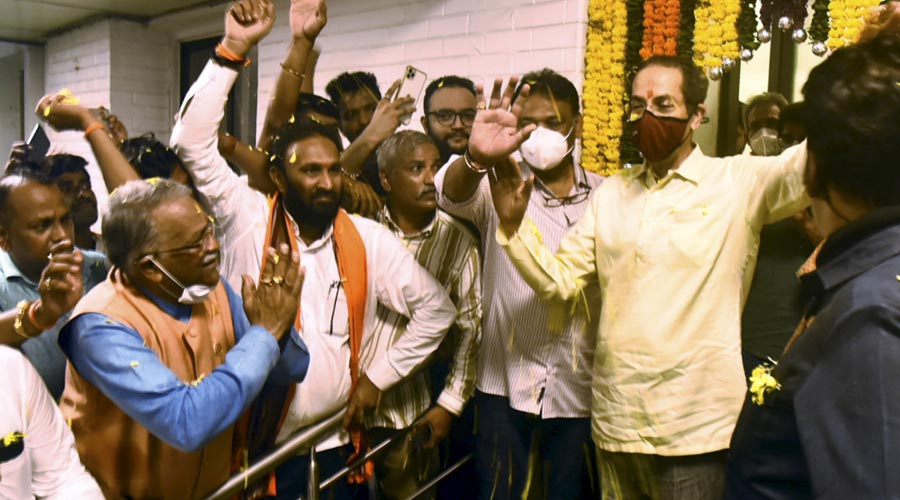 Taking dissident Shiv Sena MLAs head on, Maharashtra Chief Minister Uddhav Thackeray on Friday accused them of betrayal and challenged them to try and wean away common party workers as he slammed rebel leader Eknath Shinde and also tore into the BJP, saying it wants to "finish off" his outfit and does not want to share its Hindu votebank.

As the four-day-old political crisis, triggered due to a revolt by a group of Sena MLAs led by cabinet minister Shinde, showed no signs of heading towards a resolution, Thackeray upped the ante and said those who want to leave can do so and communicated directly with Shiv Sainiks and mid-level functionaries, and also met NCP president Sharad Pawar, whose party is the second largest constituent in the ruling MVA alliance.

Thackeray, whose government is also supported by the Congress, dared Shinde and the BJP to try and take away the Shiv Sena cadre and those who vote for the party.

In a virtual address to party corporators, he said the common Shiv Sena workers were his "wealth", and as long as they were with him, he did not care about criticism by others.

The Shiv Sena has been "betrayed by its own people," he said, as his two-and-a-half-year old coalition government faced a crisis after a majority of Sena MLAs joined Shinde, who is camping in Guwahati.

"We gave these rebels tickets to contest assembly elections despite many of you being aspirants for the same. These people are disgruntled after getting elected owing to your hard work, and you are standing by the party in this crucial time. I can't thank you enough," said Thackeray, who is also the Shiv Sena president.

"I had told Eknath Shinde to look into complaints regarding alliance partners. He told me that legislators were pressurizing him that the Sena should join hands with the BJP. I told him to bring these MLAs to me, let's discuss this. The BJP treated us badly, didn't honour promises. Many of the rebels have cases filed against them. So if they go with the BJP, they will become clean, if they stayed with us, they will go to jail. Is this a sign of friendship?" Thackeray asked.

The CM attacked Shinde without naming him.

If Sena workers felt that he was incapable of running the party, he was ready to resign as party president, Thackeray further said.

"The Shiv Sena is an ideology... the BJP wants to finish it off because they don't want to share the Hindu votebank with anyone," he said, adding that late Bal Thackeray had initiated the alliance with the BJP only to avoid a split in Hindu votes.

"You (referring to Shinde) have taken away those who got elected. But if you have the courage, try and take away those who got you elected. Those who want to leave are free to go openly.... I will create a new Shiv Sena, Thackeray added. In a separate virtual address to party functionaries earlier in the day, the CM said rebel leader's son is a Lok Sabha MP and should his son Aaditya Thackeray, a Cabinet member, not also grow politically.

Thackeray said Shinde was given the key department of urban development which is usually headed by the chief minister of the day and blamed the opposition BJP for the rebellion in the Shiv Sena.

"You make take the fruits and flowers of tree. But till the roots (rank and file) are strong, I need not worry. The roots can never be uprooted. Every season, new leaves and fruits blossom. Leaves blighted by disease need to be removed and thrown. Consider the present situation in this context," Thackeray told the party rank and file.

"I have given up the temptation by moving out the chief minister's official bungalow (Varsha) but not my determination to fight back," he asserted and made it clear he is not after power.

The CM has moved to his family residence 'Matoshree' in suburban Bandra.

"The department of urban development, which is currently with Shinde, had been always with the chief minister. Your son (Shrikant Shinde) can be an MP, but should not Aaditya also grow politically?"the CM asked.

Shrikant Shinde is the Lok Sabha MP from Kalyan, while the CM's son, Aaditya Thackeray, is a state cabinet minister.

Attacking Shinde, Thackeray said, "He was made a minister twice after Balasaheb Thackeray's death (in 2012). Twice we were in power (after 2012). He was given the departments which are normally kept by the chief minister himself. You should keep Thackeray name out of your politics and see if you can survive. One can never detach the Thackerays from the Shiv Sena." Thackeray said in the last two years, he battled his own ill health and also presided over the state's fight again the COVID-19 pandemic.

Maintiaing a defiant posture, Shinde claimed the group led by him was the "real Shiv Sena", and also hit back, saying he and his supporters will not be intimidated by disqualification threats.

In a series of tweets posted late Thursday night, Shinde, who is camping in Guwahati along with 37 Sena legislators and 10 independents, said as per the 10th Schedule of the Constitution, a party whip is issued for the legislature proceedings and not for attending a meeting.

Shiv Sena MP Sanjay Raut admitted the party's numbers in the Legislative Assembly have dwindled, but expressed confidence that the rebel MLAs will support the MVA combine during a floor test.

The Uddhav Thackeray-led Shiv Sena suffered yet another setback as one more party MLA, Dilip Lande, joined the camp of rebel legislators.

Meanwhile, the Assam unit of the Congress staged demonstrations near a luxury hotel in Guwahati, where rebel Sena leader Shinde and other MLAs accompanying him are staying demanding that they leave the north-eastern state as it is reeling under a devastating flood.

Assam Congress chief Bhupen Bora also wrote a letter to Shinde telling him that their presence at such a critical juncture has "defamed" the BJP-ruled state. Congress leaders were not allowed to enter the hotel and a police official deployed there was requested to hand over the letter to the Sena leader.