Mamata has alleged that the exit polls were a “conspiracy” 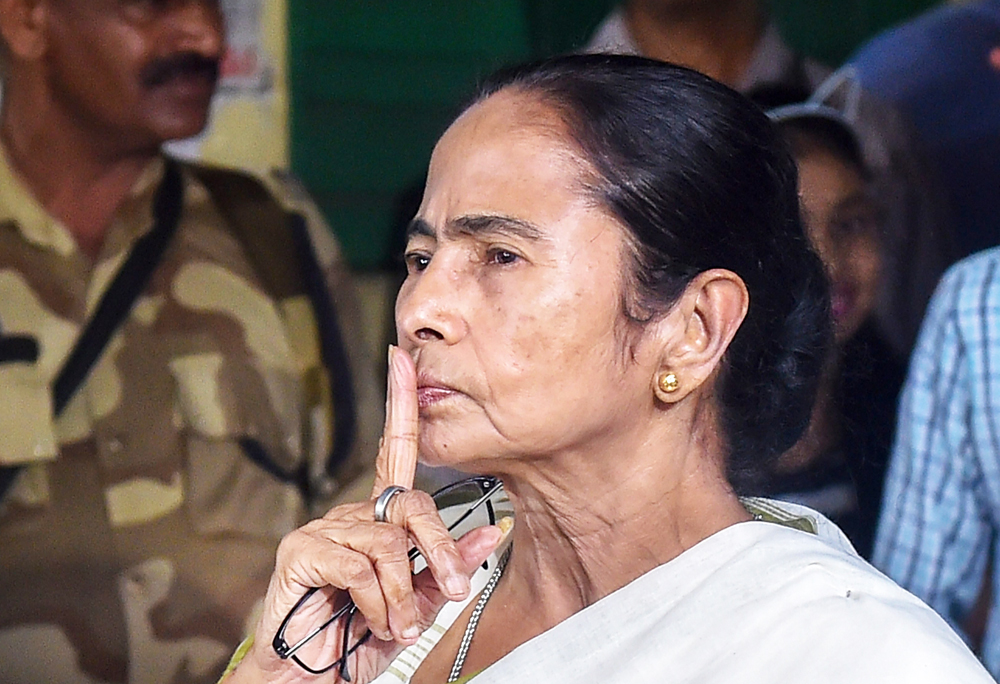 Four exit polls have forecast between 11 and 23 seats for the BJP in Bengal, a spectacular surge if the results on Thursday match the projections.

If the four exit polls — taken immediately after voters leave the polling stations — are bunched together, the best-case scenario for the Trinamul Congress is 29 of the 42 seats and the worst is 19.

In the 2014 Lok Sabha polls, Trinamul had bagged 34 seats, and Mamata had started her campaign this time with the call for “beyallish-e beyallish (42 out of 42)”.

The upper limit of the band of 11 to 23 votes that the four exit polls have predicted for the BJP echoes the 23-seat target set by party president Amit Shah.

Although exit poll predictions have been known to go wrong, their unanimity on a double-digit performance by the BJP in Bengal has made several Trinamul politicians jittery. “This is really worrying,” a Trinamul MP said.

Among the four exit polls, only the one by India Today-Axis has given the vote share break-up, which indicates that both Trinamul and the BJP have received around 41 per cent votes, followed by the Congress at 7 and the Left Front at 5. 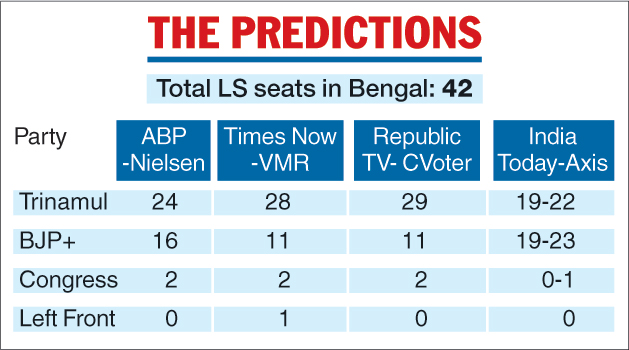 The figures suggest a rise in the vote shares of both Trinamul and the BJP compared with their 2014 shares. But the projected spike for the BJP is a breathtaking 24 percentage points from its vote share of 17 per cent in Bengal five years ago.

The Trinamul vote share, which was 39 per cent in 2014, is projected to rise by 2 percentage points.

A political scientist said that if the vote share prediction turned out correct, the projected seat tallies appeared possible.

“The Left Front got around 29 per cent of the votes in 2014, while the exit poll is hinting at a 5 per cent vote share for them in Bengal this time. This means a 24 percentage point plunge, and this slice may have gone to the BJP,” the academic said.

But Mamata put up a brave face and trashed the predictions.

“I don’t trust exit poll gossip. The game plan is to manipulate or replace thousands of EVMs (electronic voting machines) through this gossip. I appeal to all Opposition parties to be united, strong and bold. We will fight this battle together,” she tweeted on Sunday evening.

Later, in a telephone interview to ABP Ananda, she explained the reason behind her lack of trust in exit polls. “The pollsters had predicted Trinamul’s defeat in the 2016 Assembly polls,” the chief minister said. Trinamul had then swept the polls.

Mamata alleged that the exit polls were a “conspiracy”.

“The Opposition parties are getting united ahead of the results…. The conspiracy is to ensure that there is no activation of Opposition unity,” said. “You will see the stock markets zoom tomorrow.”

According to Mamata, some senior national-level leaders had got in touch with her after the exit polls.

“I have told everyone that there would be attempts to manipulate or replace the EVMs and so everyone should try to protect the machines,” she said.