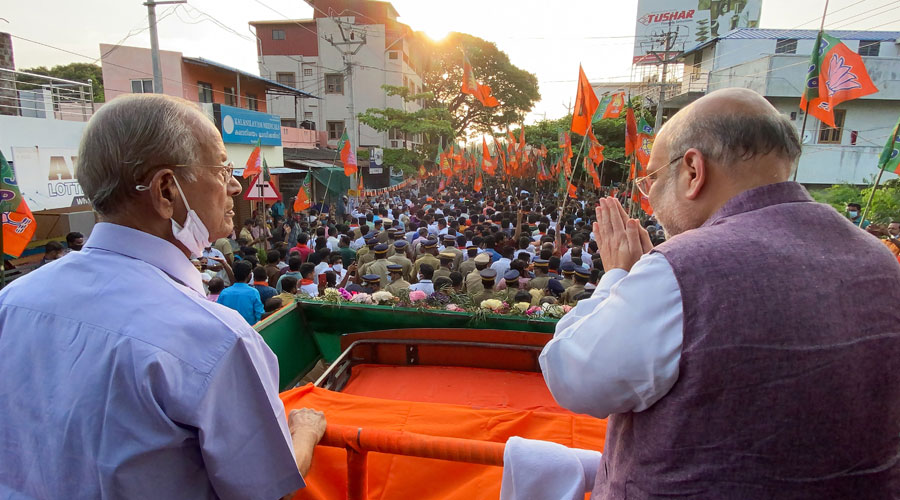 The BJP lined up several promises, including a legislation to protect traditions of the Ayyappa temple at Sabarimala and law against "Love Jihad", while assuring employment for at least one person from each family and free laptops to high school students, in its manifesto for the Kerala Assembly polls unveiled on Wednesday.

Describing the manifesto as progressive, dynamic, aspirational and developmental oriented, Javadekar said it guarantees a terrorism-free and hunger-free Kerala, among others.

According to the manifesto, social welfare pension would be raised to Rs 3,500 and temple administration will be freed from political control and entrusted to devotees.

The LDF government had promised to raise the social welfare pension to Rs 2,600 from the current Rs 1,600, while the opposition UDF has assured to increase it to Rs 3,000, if voted to power.

It also assures ban on forcible religious conversion, six free LPG cylinders to each BPL family and restructuring ofKIIFB (Kerala Infrastructure Investment Fund Board) in line with Constitutional provisions and subjecting it to CAG audit and amending the University Act in line with the New Education Policy of the Centre.

As part of the saffron party's assurances on places of worship, the manifesto promises to take urgent steps to re-acquire encroached lands of temples and a legislation for an independent, non-political and devotee controlled temple administration in the state.

The union minister said while Congress is fighting the Communists in Kerala, they are allies in West Bengal.

"I am curious as to who is fighting who in Kerala. Because Congress and Communists are partners in Lok Sabha and everywhere else.Here they are fighting.This is a mock fight. Bengal me dosti aur Kerala me Gusti."

"They passed two resolutions in the Assembly together. One was demanding release of Madani (PDP leader Abdul Nasser Madani) and another against the CAA," Javadekar said.

Urging the Left government to come clean on the Sabarimala issue,he said "Their (Left party) stand is completely exposed now.Pinarayi (CM Pinarayi Vijayan) and Yechury (CPI(M) general secretary Sitaram Yechury ) are for the entry of women whereas Devaswom minister Kadakampally Surendran, the LDF candidate from Kazhakootam, is against it."

"The government also needs to explain their role in the gold smuggling case," Javadekar said.

The Union Minister also alleged that the state government was "hijacking" the central government projects and presenting them with minor changes as their own.

We have given 80 crore people free ration for eight months which includes five kg dal and 40 kg rice to each family.

"But the Kerala government wants to take credit. Mr Pinarayi Vijayan, it's not you but Modi, who has done all this," he said.

The Centre has given houses to more than 1.27 lakh people along with toilets.With little modification, theLDF government has modified it into the Life Mission project, Javadekar claimed.

"It's the Modi government which has done that.Not Pinarayi Vijayan," he said.