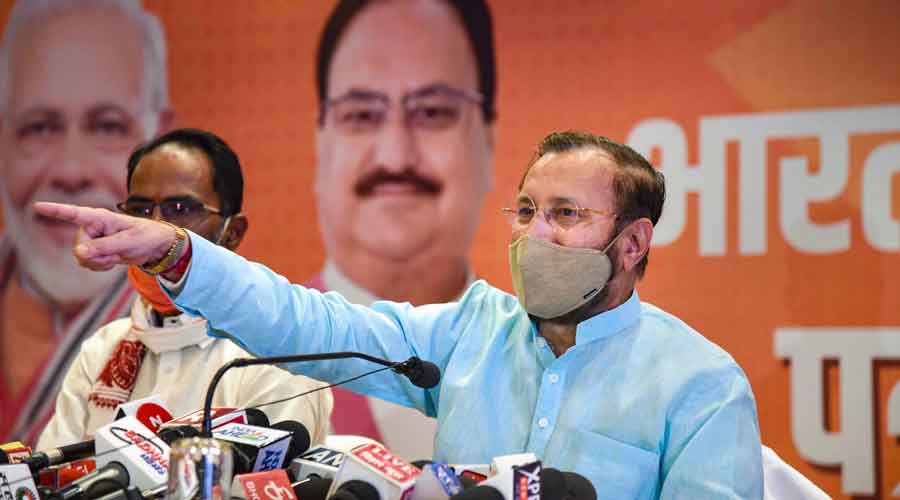 “Pakistan has admitted its hand behind Pulwama terror attack. Now, Congress and others who talked of conspiracy theories must apologise to the country,” Prakash Javadekar tweeted
PTI
Our Special Correspondent   |   New Delhi   |   Published 31.10.20, 12:20 AM

The BJP on Friday demanded an apology from the “Congress and others”, latching on to a Pakistani minister’s boast of the country’s involvement in the Pulwama terror attack.

“Pakistan has admitted its hand behind Pulwama terror attack. Now, Congress and others who talked of conspiracy theories must apologise to the country,” information and broadcasting minister Prakash Javadekar tweeted on Friday.

Javadekar’s tweet came in response to Pakistan minister Fawad Chaudhary boasting in the National Assembly that his country had hit India hard in Pulwama.

The minister subsequently said he had been “misinterpreted”.

He said he was referring to post-Pulwama air strikes by his country.

Javadekar and other BJP leaders didn’t refer to the Pakistani minister’s retraction and went all out to slam the Congress and other Opposition parties, seizing his initial statement.

“Terrorism anywhere in the world has its roots in Pakistan. But, it is irony that Rahul Gandhi and his associates from Congress party termed the Pulwama attack as a match fixing between Prime Minister Narendra Modi and Imran Khan,” BJP spokesperson Sambit Patra said.