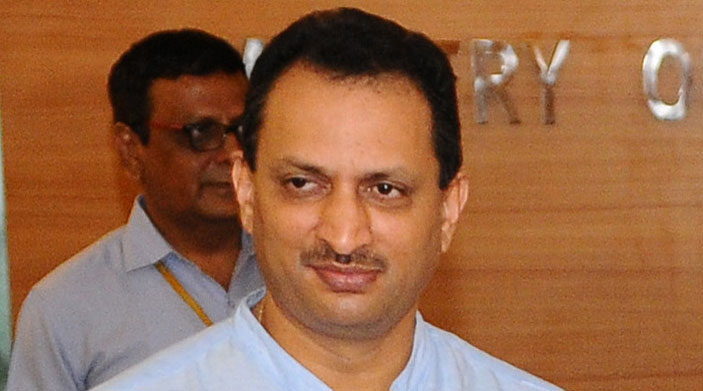 BJP parliamentarian Ananth Kumar Hegde, infamous for spewing communal poison, has now targeted government telecom company BSNL by claiming that it is “packed with traitors” and calling for its privatisation and sacking of its employees.

Hegde, who represents Uttara Kannada in the Lok Sabha, was addressing a gathering at Karwar on Monday when he accused BSNL of providing poor service to his hometown.

Hegde, sources said, was apparently angry over a recent flood of tweets to the Union minister for telecommunications seeking 4G spectrum for BSNL.

Hegde is heard saying in the video clip, with a seemingly like-minded audience cheering him on: “This company is packed with traitors…. BSNL has become a blot on the nation and it has to be finished.”

“The Prime Minister is talking about Digital India and is even providing funds for that. Even the technology is ready, but they (BSNL employees) are not ready to work,” the MP from Karnataka added.

“BSNL has an arrogant system. Just imagine how arrogant they are as even our government has not been able to set it right,” he went on, suggesting that the only option was to privatise the company.

“We have so far removed some 85,000 employees. More retrenchments would be needed in the coming days. Whatever it is, it has to be privatised. That’s the only way out,” Hegde said.

Over 80,000 employees of the loss-hit BSNL last year opted for a government-introduced voluntary retirement scheme. The Centre, however, had informed Parliament in March this year that it would not sell or privatise BSNL and its subsidiary MTNL and had spoken of plans for a revival package.

The All Unions and Associations of BSNL, a collective of trade unions, held a meeting in Bangalore on Tuesday and condemned Hegde’s comments.

The state president of the BSNL Employees’ Union, the most popular labour wing of the company, C.K. Gundanna, told The Telegraph that they would write to the President, Prime Minister, communications minister and the BSNL chairman in Delhi about Hegde’s statements.

“So far he had been spewing communal venom against anyone opposed to his ideology. Now he has turned against a company like BSNL that has rendered yeoman service to our country,” Gundanna said.

“He is accusing us of not working. For his information, we laid an under-sea cable from Chennai to Port Blair only yesterday to have our own dedicated line to provide all services to the people of Andaman and Nicobar islands,” the trade union leader said.

Prime Minister Narendra Modi had himself hailed the 2,300km submarine project for fast Internet to Andaman and Nicobar and tweeted: “Kudos to those who worked on this!”

Gundanna said telecommunications minister Ravi Shankar Prasad had promised to give 4G spectrums to BSNL way back in April 2019. “That was one of the conditions for shrinking our manpower. But now there is no talk of 4G,” he said.

Gundanna disputed Hegde’s claim that the government had provided enough funds for BSNL. “The government has not paid us one rupee. Government departments have huge dues towards unpaid bills for our service. Our contract workers haven’t been paid salaries for one year,” he said.

Besides VRS, many BSNL employees have left due to non-payment of salary. “From 1,60,000 employees on December 31 last year, we are right now around 60,000. How is it possible to provide great service with such reduction in manpower and no fresh recruitments?” Gundanna asked.

Hegde, who had been a Union minister in the previous Modi government, is known for making communally charged and intemperate comments and also getting away with it. This time too, the BJP has not said anything about his attack on BSNL.

Earlier, Hegde had courted controversy by calling the freedom movement “an adjustment with the British” and appearing to be critical of Mahatma Gandhi.

He had called S. Sasikanth Senthil, an IAS officer who resigned in the wake of the abrogation of Article 370, a “traitor” and said a government servant should not question the decisions of the government.

In the run-up the 2019 Lok Sabha polls, Hegde had kicked up a storm by lampooning Rahul Gandhi for saying he was a Brahmin and making communally loaded statements.