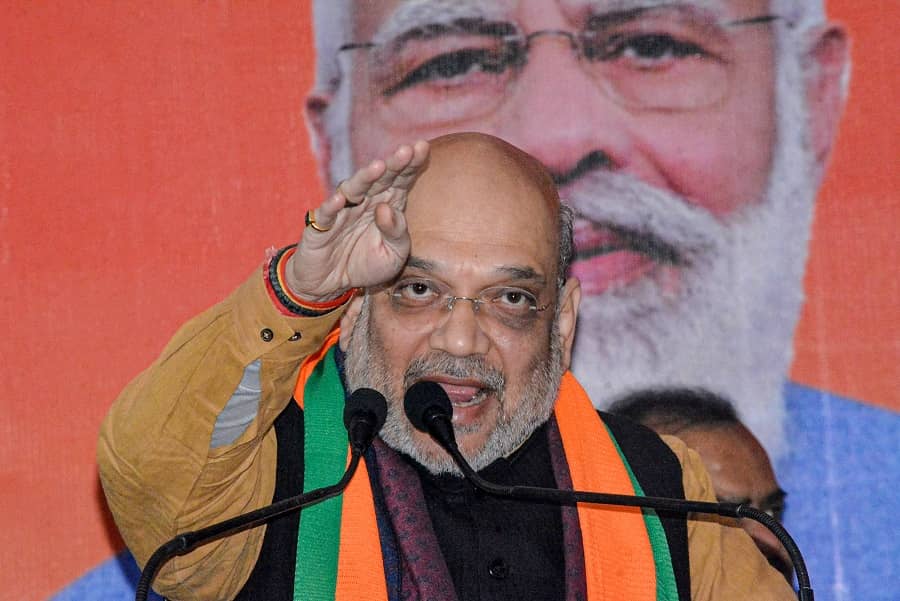 Union Home Minister Amit Shah on Saturday took a swipe at Samajwadi Party chief Akhilesh Yadav, saying he does not have "shame" while talking "lies" about the law and order situation in Uttar Pradesh where the BJP government has chased away criminals and mafias who flourished during the earlier regime.

He also scoffed at Yadav and RLD chief Jayant Chaudhary's display of togetherness and said leaders of these parties will be seen together only till election. He said in the event of government formation, people like Azam Khan and Atiq Ahmad will take centre stage and Chaudhary will not be seen anywhere.

Seeking support for the saffron party in western Uttar Pradesh, Shah invoked eminent Jat leader late prime minister Chaudhary Charan Singh and farmers' leader Mahendra Singh Tikait, and asked if anyone can forget the 2013 Muzaffarnagar riots during which victims were made accused.

The home minister also reeled out comparative crime figures under the present Yogi Adityanath-led state government and the one headed by Yadav before him, and dared the Samajwadi Party (SP) chief to come out with the statistics of his governance.

Addressing the 'matdaataas' (voters) here, Shah referred to the Muzaffarnagar riots during the Samajwadi Party rule. Alleging that police acted with vote bank in mind during the riots, he said, "The victims were made accused and accused the victims, and thousands of fake cases were lodged. I congratulate the BJP which acted under party leader Sanjeev Baliyan and fought the 'nyay ki ladai' (fight for justice) either in courts or on the roads."

"I want to ask the people of Muzaffarnagar and of western Uttar Pradesh if they have forgotten the riots? If the same mistake is done, then those who instigated the riots will sit on the seat of power in Lucknow, but if lotus' (BJP party symbol) is elected, there will be no riots," he said, giving the target of winning over 300 seats in the northern state.

Muzaffarnagar had witnessed communal violence in 2013, killing over 60 people and displacing 40,000 people. Uttar Pradesh will go to polls in seven phases beginning February 10.

On the SP-RLD alliance for the assembly polls, Shah said, Akhileshji yesterday remarked that he and Jayant Chaudhary were 'saath-saath' (together), but till when? If the government is formed, Jayant bhai will go and Azam Khan will sit (in his place) . Jayant will not be seen with him (Akhilesh). Atiq Ahmed will also come. Why do you want to befool the people of the state? The distribution of tickets shows what is going to happen in the future."

Referring to the situation during the previous SP government, he said everyone in the state was concerned about security and the manner in which mafia flourished during SP, Bahujan Samaj Party (BSP) governments and those doing politics in the name of caste and religion, but today no one is worried about security after the Adityanath government came to power.

"All goondas' (hooligans) have run away from the boundary of Uttar Pradesh. As per our promise, the Yogi Adityanath government has chased away goondas and mafias.

"When Behenji's party (BSP) came to power, it talked of one caste, the Congress talked of one family and Akhilesh ji of goondas, mafias and appeasement, but the BJP talked of security and development," he said.

Taking a dig at Akhilesh Yadav for attacking the Uttar Pradesh government on law and order, the Union minister said, He does not have shame and speaks lies in such a manner that it could be taken as truth. I have brought the statistics and if you (Yadav) have the courage, hold a press conference with figures of your earlier government.

He also highlighted that figures of kidnapping, murder and extortion have come down substantially in comparison with the time of SP rule (2012-17). Terming vote as the biggest power in democracy, Shah exhorted his audience to use it judiciously.

"If it (vote) goes to SP and BSP, there will again be mafia raj' and if it goes to the BJP, it will help Uttar Pradesh become number one state in the country under Prime Minister Narendra Modi's leadership," he said.

Claiming that security of the country was topmost priority for the BJP government, the senior party leader said for 10 years, it was the Sonia (Gandhi) and Manmohan (Singh) government with SP and BSP when terrorists from across Pakistan border came this side and killed our security personnel, but the leadership in Delhi was not affected in the lure of vote bank.

"Can the SP, BSP and Congress keep the country and the state safe?" he asked, adding that it is only the BJP under the leadership of Modi that can do it.

Shah also targeted the SP chief on the farmers issue. He said there were 42 sugar mills, of which 21 mills were closed by the SP and BSP.

Whereas during our time, none was closed and payments to farmers were made. We have decided to announce in the BJP manifesto that in case of delay in clearance of payment, the interest will be realised from the sugar mills, he said. Uttar Pradesh minister Kapil Dev Aggarwal is BJP's candidate from Muzaffarnagar, whereas SP-RLD alliance has fielded Saurabh Swarup from the seat. The home minister also visited Deoband town in Saharanpur district for the party's door-to-door campaigning on Saturday, but had to return after a large number of supporters gathered there in violation of COVID-19 protocol.