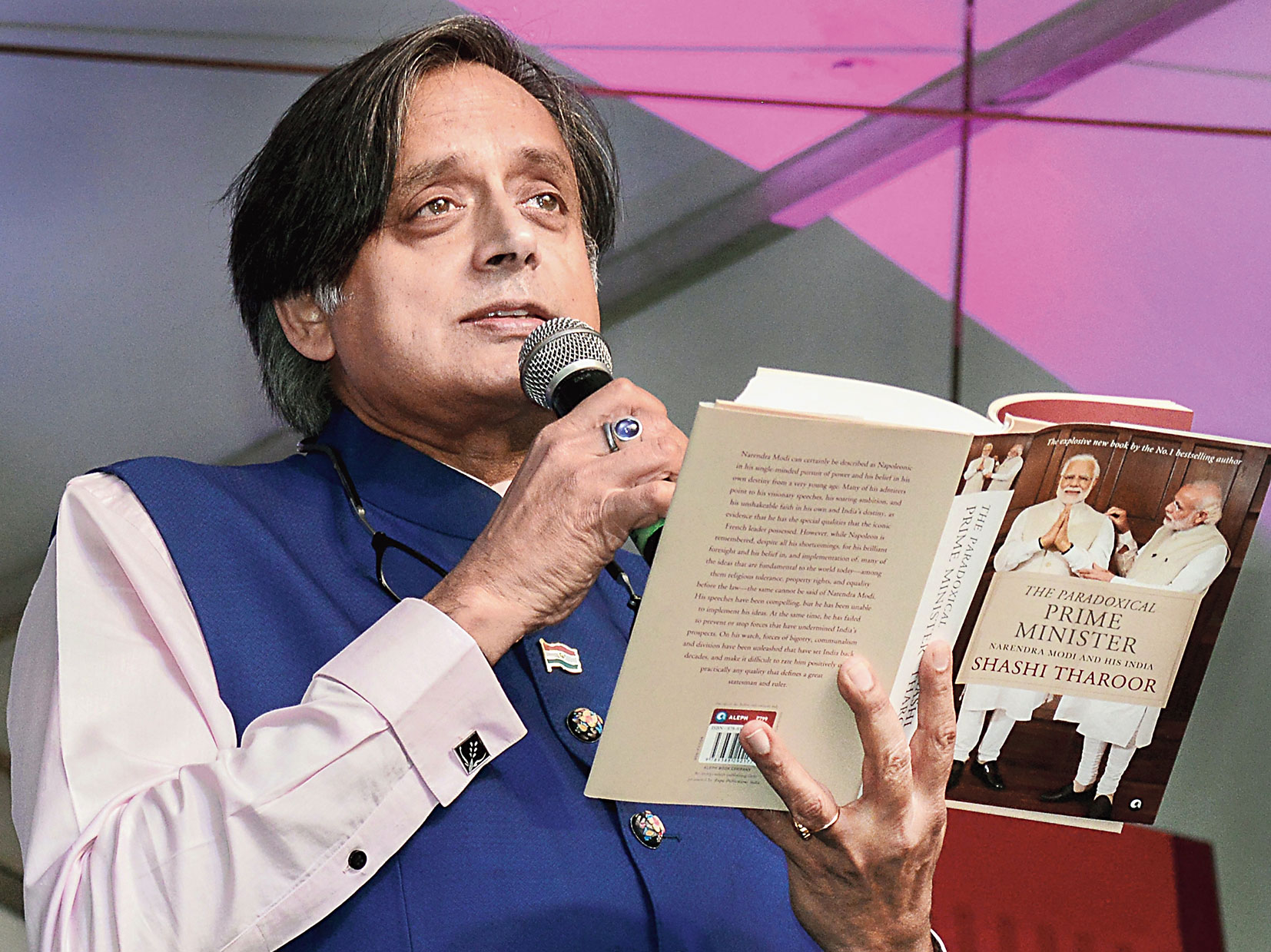 Tharoor said: “If you think about it, that’s a very, very profound understanding of the relationship. Because if you remove a scorpion with your hand, you will get stung very badly but if you hit a shivling with a chappal, then you have undermined all the sacred tenets of the faith that you hold and that the scorpion is sitting on. So ultimately you live with it, with seething frustration.

“That may well be a very interesting clue to the rather complex dynamics that exist between the Hindutva movement and the Moditva expression of it.”

Reacting to this remark, Union law minister Ravi Shankar Prasad demanded an apology from Rahul and asked him to end the “hypocrisy of being a Shiv bhakt and respecting the Hindu faith” after the manner in which Tharoor, “chargesheeted in a serious allegation of murder”, has “almost abused the sanctity of the shivling and Lord Mahadev by referring to a chappal attack through an unnamed source”.

Tharoor responded with a series of tweets in which he pointed out that he was only quoting what has been in the public domain for six years. He tweeted a link to the article he had referenced.

“This comment (not by me) has been in the public domain for six years. RS Prasad making an issue of a 6yr old quote shows how little new the BJP has to offer the nation,” he said.

Tharoor asked Prasad which “murder case” he has been chargesheeted for and whether “you are planning to invent one, Mr. Law Minister”. The Congress MP is facing an abetment to suicide case over his wife Sunanda Puskhar’s death.

“And while you’re about it, could you explain where the alleged insult lies? I worship a Shivling at home & carry a miniature Shivling in my pocket daily. Insulting Lord Shiva is unthinkable for me. But exploiting him for petty politics is apparently OK for you,” he said.

The book, released on Friday, is likely to anger the BJP on several counts as it is a scathing indictment of “Moditva’, providing a counter-point to all the claims made by the government and the ruling party, including on foreign policy, that came into sharp focus on Sunday with US President Donald Trump reportedly declining Modi’s invite to be chief guest at the Republic Day Parade.

The chapter on Indo-US relations under Modi’s watch is titled All Hat and No Cattle’ —borrowing the “Texan phrase about cowboy braggadocio” — and argues that the Americans are “increasingly beginning to feel that behind the packaging there is no product”. He details how India’s “soft power is at risk from hardline Hindutva”.

Of the view that the “economic reformism preached at the top and the cultural nativism that animates the majority beneath have affected the government’s agenda”, he says: “What makes it worse is that the political majority needed by the prime minister to pursue his economic policies relies entirely on the political campaigns and organised capacity of the very people whose chauvinism is undermining him.”

The BJP on Sunday questioned the “Shiv bhakt” credentials of Congress president Rahul Gandhi and demanded an apology from him for what it described as the “horrific denunciation” of Lord Mahadev by party leader Shashi Tharoor earlier in the day.

Interacting with a gathering in Bangalore in connection with the release of his new book, The Paradoxical Prime Minister, Tharoor quoted from an article that had appeared in a magazine in March 2012 to argue that the “personality cult” of Narendra Modi did not go down well with many in the RSS.

“There’s an extraordinarily striking metaphor expressed by an unnamed RSS source to the journalist Vinod Jose of The Caravan which I quote here in which they express their frustration with their inability to curb Mr Modi. And the man says, ‘Mr Modi is like a scorpion sitting on a shivling. You cannot remove him with your hand, and you cannot hit it with a chappal either’.”