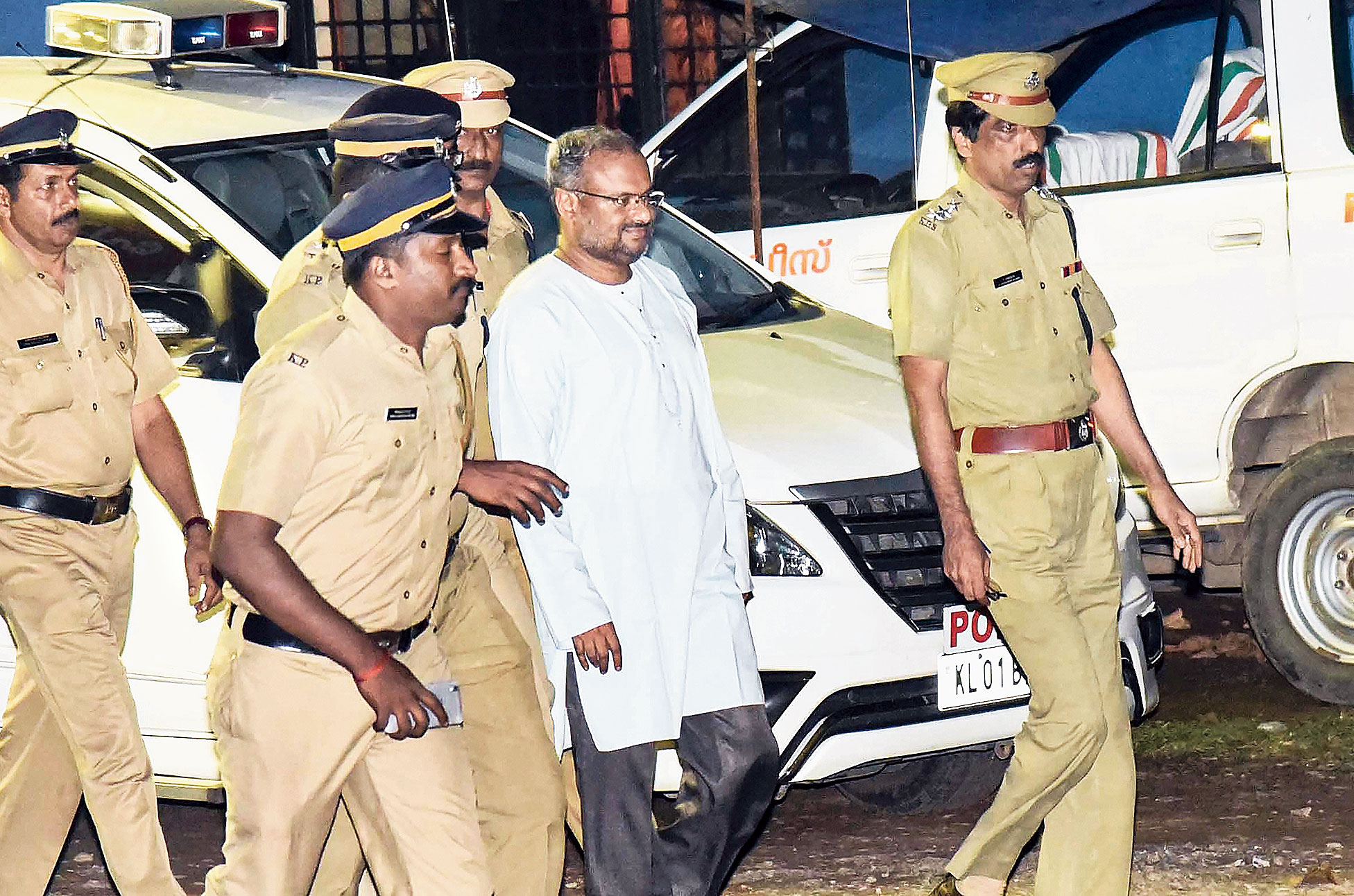 Bishop Franco Mulakkal, accused of raping a nun multiple times, was arrested on Friday evening after three days of questioning.

The arrest comes 86 days after the victim lodged the FIR, with police concluding “with reasonable suspicion” that he had committed the crime.

After recording the arrest around 8pm, Mulakkal was taken to a local hospital at Tripunithura in Ernakulam district for the mandatory medical examination. After the test, he was taken to Kottayam, where he will be produced before a magistrate in Pala on Saturday.

Earlier on Friday, Kottayam superintendent of police Harishankar had said: “The investigation officer has concluded with reasonable suspicion all charges listed in the FIR.”

Mulakkal was questioned at the crime branch office in Tripunithura for the past three days. The bishop, who attended the interrogation in his white cassock, was seen walking out of the office dressed in a white kurta and black pants.

The Catholic Bishops’ Conference of India said the arrest of Mulakkal was a “sad moment”.

“We have learnt from the media about the developments in Bishop Franco Mulakkal’s case. It is a sad moment for all of us. We pray for all involved: Bishop Franco, the nun concerned, the diocese of Jalandhar and the Congregation of Missionaries of Jesus.

“We have full confidence in the judicial system of our country. As said before, we expect the law to take its course and for the truth to emerge. At this moment our prayer is for healing,” a media release signed CBCI president and Archbishop of Bombay Oswald Cardinal Gracias said.

Mullakal was temporarily relieved of his duties as bishop on Thursday, but he has not been defrocked.

The nun, attached to a convent at Kuravilangad in Kottayam, had filed the police complaint on June 27 accusing the bishop of raping her 13 times between May 5, 2014, and September 23, 2016.

In the FIR, Mulakkal had been booked for wrongful confinement, persistent sexual assault, unnatural sex and criminal intimidation. If convicted, he faces a maximum punishment of life imprisonment. The rape charge could be added on Saturday, police sources said.

The nun had accused Mulakkal of committing the first rape in room No. 20 of the convent where he stayed the night while on a visit from Punjab’s Jalandhar, where he was the bishop of the local diocese.

He allegedly summoned her and forced himself on her. The nun had alleged that she was raped 12 more times and that she had no option but to yield to him.

Mulakkal had all along denied the allegations and maintained that he was innocent during the lengthy interrogation.

He was first subjected to nine hours of questioning in Jalandhar on August 13, and later summoned to appear before the investigating officer in Kerala on Wednesday.

Sources said the bishop “cracked” during the interrogation on Friday.

After Thursday’s seven-hour grilling, SP Harishankar had told reporters that the

In his defence, the bishop had produced a video of an event that took place on May 6, 2014, two days after the alleged first rape, which the nun had attended. His argument was why would the nun attend an event with him if he had raped her.

But on close examination, the investigators found the video had been edited to suit Mulakkal’s argument. The police got hold of the entire video of the event from church sources and found that the nun appeared deeply upset in the portions that had been edited out. She was seen with her head down.

A native of Thrissur, Mulakkal was ordained as a priest in 1990 and rose up to the position of auxiliary bishop in 2009. He was appointed bishop of the Jalandhar diocese in 2013.