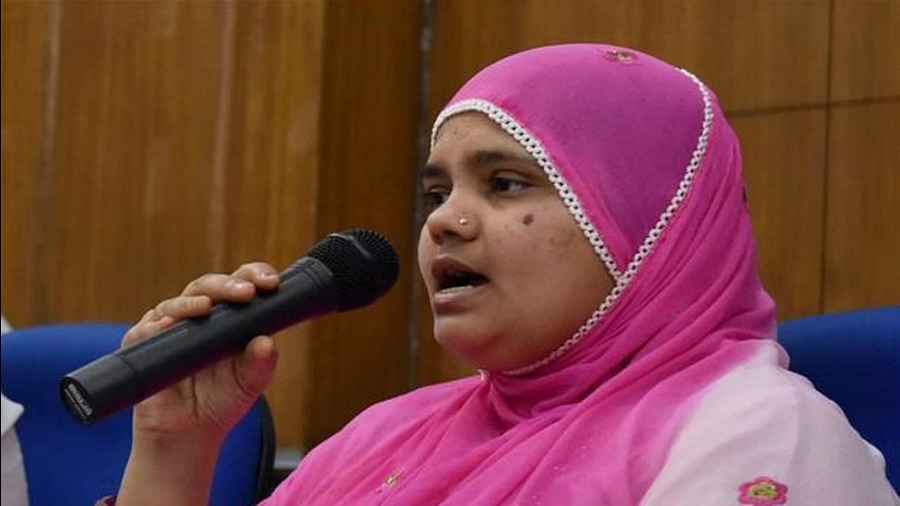 The  Supreme Court agreed to consider early hearing of two petitions moved by Bilkis Bano on Wednesday, one challenging the premature release of 11 lifers convicted of gang-raping her and massacring her family, and the other contesting the apex court’s earlier directive to the Gujarat government to consider such remission.

Chief Justice D.Y. Chandrachud, at the head of a bench that included Justice P.S. Narasimha, told Bilkis’s counsel Shobha Gupta that the review petition against the apex court order would have to come up first.

When Gupta asked that it be heard in open court, Justice Chandrachud said this could be decided only by the bench headed by Justice Ajay Rastogi that had passed the original judgment. A review petition is usually heard within closed chambers by the judges who had passed the original verdict, without access to lawyers and the litigants.

Only in exceptional cases does the apex court allow opencourt hearing of a review petition. It was on the basis of the apex court’s May 13 order — which asked Gujarat to consider a remission plea moved by one of the convicts, Radheyshyam — that the state government considered and effected the lifers’ release with the consent of the Centre.

The 11 convicts were freed on August 15.  Bilkis’s other plea is a writ petition under Article 32 (enforcement of fundamental rights) that seeks quashing of the state government’s August 10 order to release the convicts.

Earlier, public-spirited people had moved review petitions against the May 13 order but the  convicts had questioned their maintainability on the ground that the petitioners were not the purported victim. These pleas will be clubbed with Bilkis’s review petition.

A pregnant Bilkis was gang-raped and seven members of her family, including her baby daughter, were murdered during the 2002 Gujarat pogrom. Her review petition complains that Radheyshyam had “not come with clean hands” to the court, having concealed several incriminating facts that Bilkis now wants to place before the court.

It adds that the appropriate state government to decide on the remission was the Maharashtra government, which had conducted the prosecution, and not the Gujarat government as decided by the apex court in the May 13 order. Bilkis has cited several Supreme Court judgments in this context, including one relating to Rajiv Gandhi’s assassins.

“The petitioner, who is the victim and prosecutrix in the criminal case, was not even made party respondent by the writ petitioner (Radheyshyam) in the writ petition,” Bilkis’s petition says. “This was the reason that she had absolutely no information of the filing or pendency of the said writ petition or the order passed therein by this hon’ble court till the writ petitioner and other 10 co-convicts/ prisoners were prematurely released.”

It adds: “The writ petitioner/ convict concealed important documents/ material from this hon’ble court which are very necessary for proper adjudication of the review petition and issue in hand; the present petitioner would therefore be filing an application seeking permission to bring on record additional facts and documents.”

That Radheyshyam “deliberately misled this hon’ble court”, the petition says, is “revealed from the material now placed on record by the state of Gujarat”. Bilkis has highlighted that “the prosecuting agency CBI and the CBI special court Mumbai had declined to grant premature release” to the convicts.

Bilkis’s other petition says the remissions ought to be quashed and that she, her husband, grown-up daughters and other family members are “shell-shocked” at the development and fear for their safety. “The en masse premature release of the convicts in much talked about case of Bilkis Bano has shaken conscience of the society and resulted in a number of agitations across the country. This hon’ble court has already declared that en masse remissions are not permissible and that remission cannot be sought or granted as a matter of right of the convict without examining the case of each convict individually based on their peculiar facts and role played by them in the crime,” it says.

“When the nation was celebrating its 76th Independence Day, all the convicts were released prematurely and were garlanded and felicitated in full public glare and sweets were circulated and this is how the present petitioner along with the entire nation and the whole world came to know about the shocking news of premature release of all the convicts.”