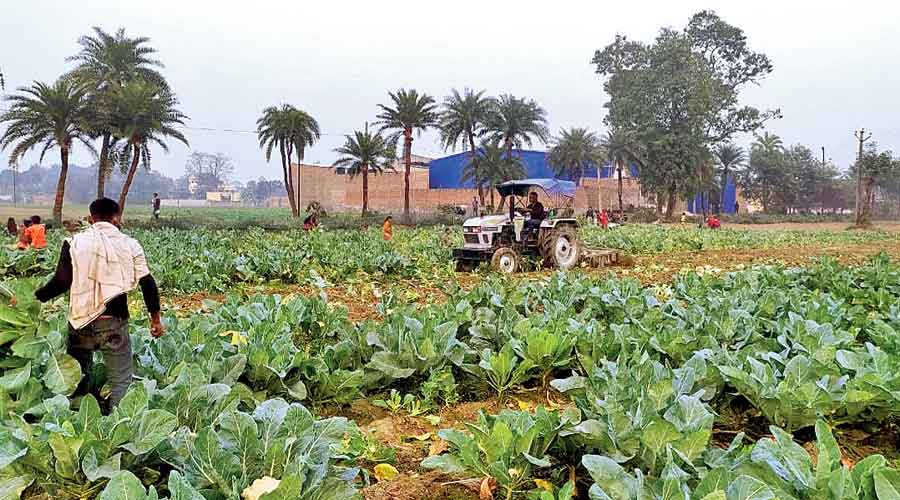 Omprakash Yadav destroying his cauliflower crop after the drop in the wholesale prices
Sanjay Choudhary
Dev Raj   |   Patna   |   Published 16.12.20, 01:27 AM

Omprakash Yadav of Muktapur village in Bihar’s Samastipur district was happy with the cauliflower crop he had sown three months ago on his 5-acre land. Each of the vegetables had grown to weigh around 2.5 to 3kg and was ready to be harvested.

But his joy evaporated when he tried to sell the produce in the mandi (wholesale market). Cauliflowers were fetching just Re 1 per kg, or Rs 100 per quintal, in the wholesale market.

This would not cover even the Rs 150 per quintal required just to harvest the crop and take it to the market.

A heartbroken Omprakash, 36, returned to his village and ploughed the field with a tractor to destroy the ready-to-harvest crop.

“I have ploughed around 3.5 acres so far over the past two days. Around 1.5 acres still remain. I will plough it tomorrow (Wednesday). I had never expected to see such a day, but I now know the place of farmers in our country,” Omprakash told The Telegraph on Tuesday.

The usual price for cauliflower ranges between Rs 700 and Rs 1,500 per quintal, he said. But there is a glut in the market this season and also a fall in demand allegedly because of the pandemic-induced economic strain.

Omprakash’s act came at a time when farmers from different parts of the country are protesting on the outskirts of Delhi against three new farm laws. The farmers are also demanding a legally guaranteed MSP (minimum support price) for all crops. At present, MSP is offered only for wheat and paddy.

Bihar’s farmers like Omprakash take their produce to a private mandi held at the same bazar samiti or government mandi premises that the Nitish Kumar government had done away with when it scrapped the Agricultural Produce Market Committee (APMC) Act in 2006.

In the absence of government mandis, private merchants from nearby districts and Nepal decide the prices of agricultural produce.

Omprakash said he spent Rs 150 to harvest every quintal of cauliflower, under various heads such as the payment of labourers who cut and pack them, sacks, thread to sew the sacks, transportation and hiring a coolie in the wholesale market.

“I have taken the land on lease for Rs 25,000 per acre and spent over Rs 1 lakh per acre on cultivating cauliflower. Its seeds come at Rs 40,000 per kg. We have to spend on fertiliser, pesticide, labourers and irrigation. If nature is benevolent, the crop is good, and the market is fine, we can make as much as around Rs 5 lakh per acre. If not, the earnings come down. But it had never been so bad as this year,” he added.

Omprakash, who lives in a joint family of nine members with his elder brother, had taken Rs 3 lakh as crop loan from a nationalised bank to cultivate the crop, and now is worried about how to repay it.

“I have no idea why the prices are so low in the wholesale market. I don’t even know what the government has done to protect farmers like us. I have an entire family to take care of and I may have to spend the next few months begging everybody to give some more loan or to grant some reprieve,” Omprakash said.

The family owns around 3.5 acres of land on which they are now cultivating wheat, potato, maize and beetroot. Omprakash had taken another 5 acres on lease to cultivate cauliflower to augment the family’s income and provide better education to the brothers’ five children.