He showed up wearing a track suit and a cap, with a mask covering his face and the staff's failure to recognise him until the reality dawned on them is quite a sight to behold 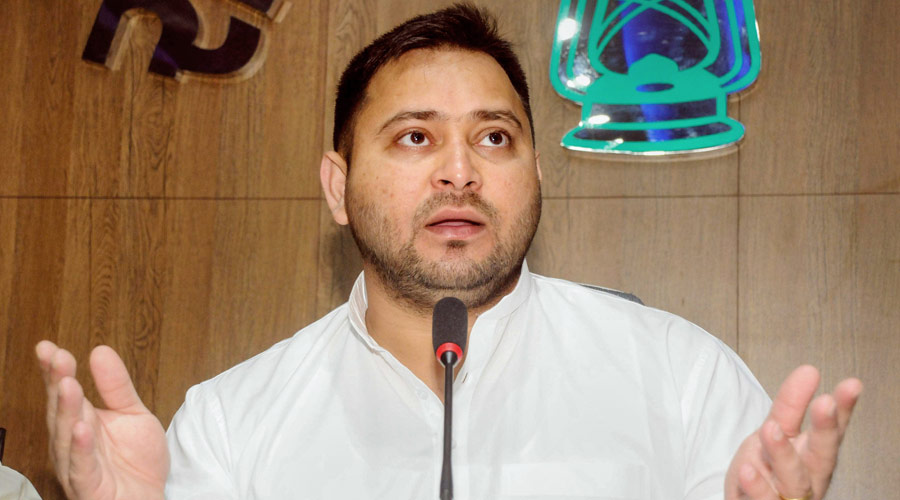 Doctors at government hospitals in the Bihar capital were left in a daze when they realised that a young man knocking at their doors past midnight was none other than Bihar Deputy Chief Minister Tejashwi Prasad Yadav.

The young leader spent the day, on Tuesday, demonstrating that he was very much in charge of the administration while his boss Nitish Kumar was away in Delhi to do some political heavy lifting.

Yadav holds key portfolios like health, road construction and urban development and he has proudly announced on his Twitter handle his "pahal" (initiative) to end the strike by Patna Municipal Corporation sweepers which has, in the past few days, buried the city's streets under heaps of trash.

However, youngsters may be more impressed with his late night "raids" on hospitals, clips of which are being run by media outlets likening the 33-year-old to the protagonist of 'Nayak', an Anil Kapoor starrer who shakes up the system as a hands-on chief minister.

The hospitals where the deputy CM conducted surprise checks included PMCH, the state's largest government health facility, besides the hospitals at Gardiner Road and Gardani Bagh.

Yadav had showed up wearing a track suit and a cap, with a mask covering his face and the staff's failure to recognise him until the reality dawned on them is quite a sight to behold.

The cool-headed politician was visibly displeased at the lack of cleanliness on the premises, poor availability of medicines and the apparent indifference towards their duty by those on night roster.

"Take notes of all shortcomings. We will take action at the review meeting of the department," the deputy CM can be heard telling his personal staff.

Notably, the health department had remained with the BJP for the entire period Nitish Kumar remained an NDA ally.

Yadav has bagged the portfolio eyed by his elder but relatively less adept brother Tej Pratap.