RJD’s Tejashwi Yadav came up with the specific idea of giving 10 lakh government jobs, promising to sign off the plan in the first cabinet meeting 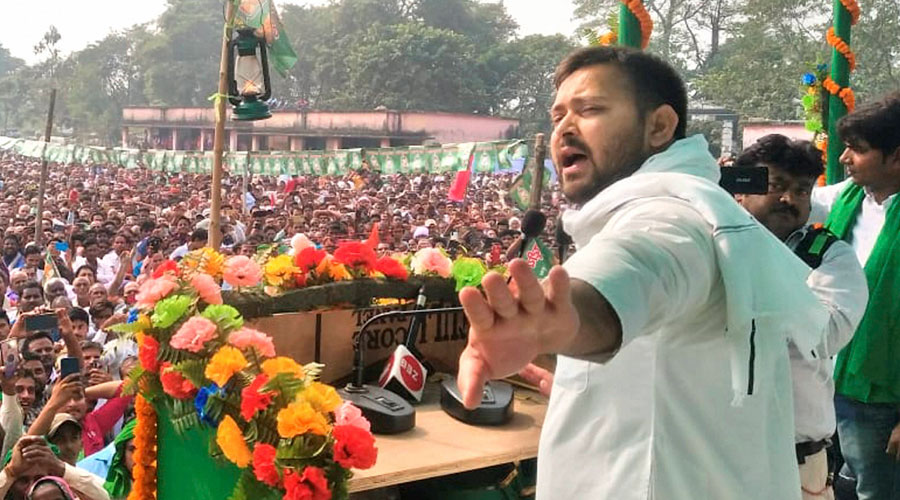 The Opposition alliance in Bihar appears to have snatched a tactical advantage by maintaining unwavering focus on bread-and-butter concerns, assiduously avoiding the diversionary trap of emotive issues laid by the ruling coalition, as campaigning for the last phase of elections ended on Thursday evening.

Senior leaders of the RJD and the Congress heaved a sigh of relief after electioneering ended without a blunder as their greatest fear had been the BJP’s expertise in hijacking the discourse, which the Opposition wanted to revolve around matters of livelihood and the failures of the government.

Congress leader Rahul Gandhi tweeted after the curtains came down on campaigning: “Get ready, now the Mahagathbandhan government will deliver jobs, farm-loan waiver, halved electricity bills, free education to girls, justice and development for all sections of society, new industries and businesses. We will build a new Bihar.”

Such confidence at the end of the campaign had appeared unimaginable earlier as the contest had looked like a cakewalk for the ruling JDU-BJP alliance at the beginning.
However, the ruling combine seemed to have messed up the strategy with a key ally, the Lok Janshakti Party, walking out with the professed objective of knocking incumbent chief minister Nitish Kumar out of the race.

The clear numerical superiority all of a sudden degenerated into a hole-and-corner affair, sending out an insidious message to the voters that the BJP was working at cross-purposes with the JDU.

Although BJP leaders soon realised the folly and tried to roll the perception back, LJP leader Chirag Paswan’s vicious attacks on Nitish and idolatry of Narendra Modi pushed the government deep into the wilder shores of farce. This also altered the perception that the Opposition was fighting a losing battle, creating the space for a new narrative before the start of the actual campaign.

The RJD’s Tejashwi Yadav came up with the specific idea of giving 10 lakh government jobs, promising to sign off the plan in the first cabinet meeting. This caught the fancy of voters in a state buffeted by rising unemployment, a situation worsened by the pandemic and the resultant economic doom.

Tejashwi didn’t commit the mistake of wavering into a bouquet of lofty promises and stuck to the job plan, developing it into the defining feature of this election. He struck a chord with youths and started attracting massive crowds. Videos of boisterous crowds uploaded on social media were not only feast for the eyes but also gave substance and legitimacy to the Opposition challenge.

On the RJD’s Twitter handle, over 70 per cent of the posts relate to the huge crowds that the young leader drew. The enthusiastic response of the people might have helped the party draw up an uncluttered action plan with a unifocal push for jobs.

The RJD’s language changed; it swiftly moved from the social justice plan to economic justice, creating a wider canvass for a party known for its Muslim-Yadav support base.
Soothing winds of inclusive politics started blowing from the RJD camp, which surprisingly described the election as a “battle for truth and justice”.

An appeal from the RJD to the people to vote for “real concerns” without any reference to identity politics showcased a transformation from the Lalu Prasad era to a new Tejashwi phase, weakening the BJP-JDU’s desperate attempts to scare the voters with the spectre of previous misrule.

Both the Prime Minister and the chief minister stoked the memories of “jungle raj”, entreating voters to punish Tejashwi for Lalu’s failures, a demand that sounded unreasonable.

Tejashwi took care to describe the people as “maalik” and started his speeches saying: “Sabko pair chhoo ke pranam (I touch the feet of all of you.)” At no point did Tejashwi display any sense of entitlement and arrogance, blunting the efficacy of the BJP’s campaign. When onions and potatoes were hurled at Nitish during a meeting in Madhubani, Tejashwi was the first to condemn it, saying: “This is undemocratic and undesirable. The displeasure should be manifested through ballots alone.”

Alliance partner Congress, which is habitually animated by a national perspective, quickly adjusted to the pressures of local dynamics and complimented Tejashwi by highlighting the miseries inflicted by the lockdown.

Rahul, too, tried to assure those sections of society that fear a Yadav dominance by saying at all his meeting: “I am here to guarantee that our government will look after the interests of every caste, every religion, every class.”

While jobs kept shaping the discourse, the BJP tried to inject extraneous factors like Article 370, Ram temple, jingoistic nationalism and Pakistan. But the Congress-RJD-Left avoided falling into the trap.

The outcome is an entirely different scenario before the final phase of voting on Saturday — while the ruling combine appears jittery, the Opposition is buoyant.