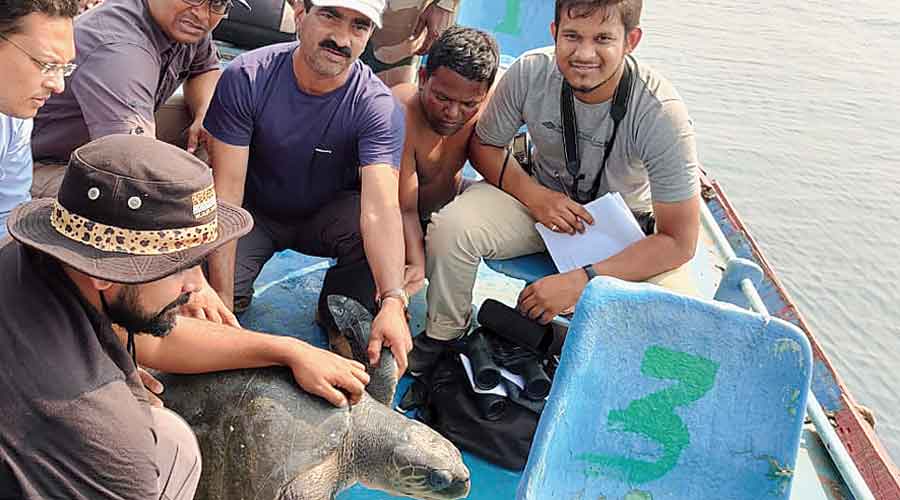 The movement of Olive Ridley turtles, which traverse thousands of sea miles to reach the Odisha coast, remains a mystery.

“How do they reach Odisha waters?” and “Where do they go back after laying eggs on the state’s beaches?” — are questions to which both scientists and environmentalists have been seeking answers for quite some time.

The Odisha forest department had sought to unravel these mysteries by tagging these endangered turtles. The exercise of tagging to track their movement in the sea was also undertaken in 1994-96. Back then, state government officials had tagged nearly 8,000 Olive Ridley turtles.

Now the exercise is being undertaken again in collaboration with the Zoological Survey of India (ZSI), with the department deciding to tag 30,000 turtles this time. The process began in the Berhampur forest division on Tuesday.

Berhampur divisional forest officer Amlan Nayak told The Telegraph: “Earlier, the Wildlife Institute of India and the Zoological Survey of India had been entrusted with the task of tagging turtles. But we began the exercise in collaboration with the ZSI on Tuesday. We have tagged six turtles so far, of which two are males and four females.”

The tags are uniquely numbered and have details such as the name of the organisation, emails, etc.

Nayak said: “We often wonder where do the turtles go after laying eggs at the mouth of the Rushikulya river and whether the same turtles return to the same beach every year or do they move to other suitable nests for laying eggs. Hopefully, the tagging of turtles will help us get some answers. Once they reach any coast in any part of the world and if any officials find them, they will get back to us and inform about their movement.”

State wildlife conservation officer Samyak Samantra told this newspaper: “During the 1996 tracking of Olive Ridleys we had come to know that these turtles are different from those living on the Costa Rica coast in the Pacific Ocean. Now this time, we are focusing on whether there is any change of migration pattern in the Olive Ridleys or whether their food habits have changed over the years. Twenty-five years is a long time. This will help in finding the extent of travel and location of the turtles after congregation, nesting for further research on their behaviour. There is a dynamic ecosystem inside the sea. How have they adjusted to life? Hopefully, we will be successful in our efforts.”

Every year during winter, the Olive Ridley turtles come to lay eggs at different places along the Odisha coast. The nesting exercise takes place on a vast stretch from Gahirmatha in Kendrapara, the Debi rivermouth in Puri to the Rushikulya rivermouth in Ganjam district, covering a distance of nearly 300km out of the 470km-long coastline of the state. Nearly 2crore Olive Ridley turtles visit the Odisha coast every year.

In order to ensure the smooth movement of the Olive Ridley turtles in the sea and on the beaches, the state government every year imposes a ban on sea fishing in accordance with Sections 2, 4 and 7 of the Orissa Marine Fishing Regulation Act (OMFRA), 1982, and provisions of the Wildlife Protection Act, 1972.

“The movement of fishing vessels disturbs the mating and breeding of the turtles. A large number of turtles are killed by the trawlers and gill nets,” said a senior official.

The ban on fishing begins in November 1 and lasts till May 31 in the areas of turtle nesting zone, particularly at the Gahirmatha marine sanctuary and the Debi and Rushikulya rivermouths. No one is allowed to go fishing upto 20km of the coastline in these areas.