Our campaign is against hatred, violence in society, says Rahul as Bharat Jodo enters Madhya Pradesh 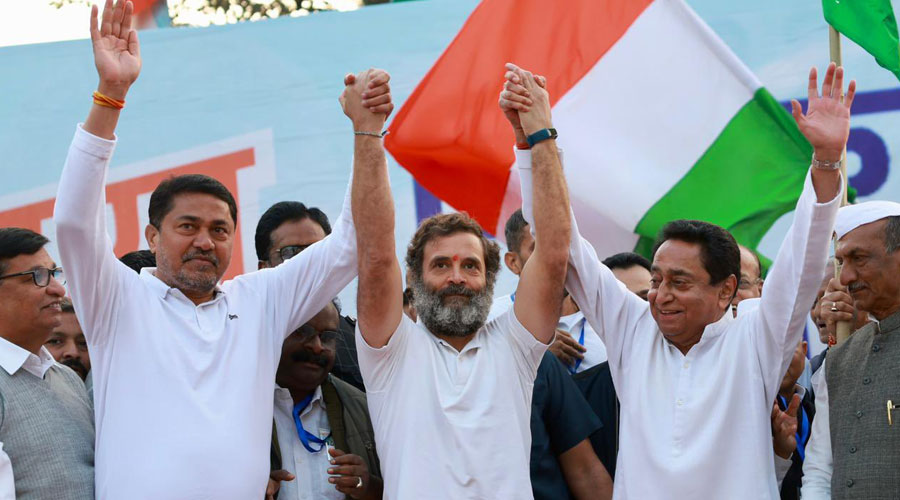 On the occasion, Gandhi said their campaign was against hatred, violence and fear being spread in society.

A large number of Congressmen carrying the tricolour in their hands reached Bodarli to join the foot march.

Maharashtra Congress president Nana Patole handed over the tricolour to Madhya Pradesh party chief Kamal Nath to formally launch the 12-day-long yatra in the central state, where it will cover a distance of 380 km before entering Rajasthan.

Bodarli, a village with a population of nearly 6,000, was decorated with banana leaves as the region is known for the cultivation of the fruit.Folk artists welcomed the yatra on its arrival in Madhya Pradesh.

On the occasion, Gandhi said, "This yatra is against hatred, violence and fear being spread in the country. We have started the Bharat Jodo Yatra by taking the tricolour in our hands from Kanyakumari. Nobody can stop this tricolour from reaching Srinanagar."

Targeting the central government on the issues of unemployment and inflation, Gandhi alleged, "The BJP first spreads fear in the minds of youth, farmers and labourers and when it sets in, they convert it into violence."

He called five-year-old boy Rudra, who was among the crowd present in the village, on the stage and asked him about his ambition, to which the child said he wanted to become a doctor.

"In the present India, it will be difficult for Rudra to fulfil his dreams as his parents have to spend crores of rupees to get education in private medical colleges. He will have to work as a labourer as he won't be able to pay the fees," Gandhi said targeting the growing trend of privatisation of education in the country.

He also claimed that industries, airports and seaports were in the hands of only three-four industrialists in the country. Even the Railways is also going into their hands, he added.

"This is an India of injustice and we don't want such an India," Gandhi said.

Welcoming the yatra in Madhya Pradesh, Kamal Nath claimed it will be most successful in the state.

Senior Congress leaders including former chief minister Digvijaya Singh, Leader of Opposition in the MP Assembly Govind Singh, former union ministers Suresh Pachouri and Arun Yadav among others were present on the occasion.

On Tuesday, Nath said Congress general secretary in-charge of Uttar Pradesh Priyanka Gandhi Vadra along with her family would take part in the foot march for the first time.

Vadra, the sister of Rahul Gandhi, will join the yatra between Burhanpur and Indore on November 24-25, Nath had said.

The Congress has made an elaborate arrangements for the yatra in MP, where the Assembly polls are due next year.

It had lost power in the state in 2020 after a section of its MLAs quit the party.

The yatra, a mass contact initiative of the Congress, will pass through western Madhya Pradesh's Malwa-Nimar region, where the party had gained a convincing lead over the Bharatiya Janata Party (BJP) in the 2018 Assembly polls and subsequently formed government under Nath.

But, 22 MLAs later quit the party following which the Nath government fell and later the BJP came back to power in the state under the leadership of Shivraj Singh Chouhan in March 2020.

The Congress's Bharat Jodo Yatra started on September 7 from Kanyakumari in Tamil Nadu.