Advertisement
Home / India / Bengal among states testing less: Centre
UP, Bihar in list of 13 not meeting WHO threshold

Bihar, Gujarat, Telangana and UP are also among states where check-up rates are below India’s average of 201 tests per day per million population 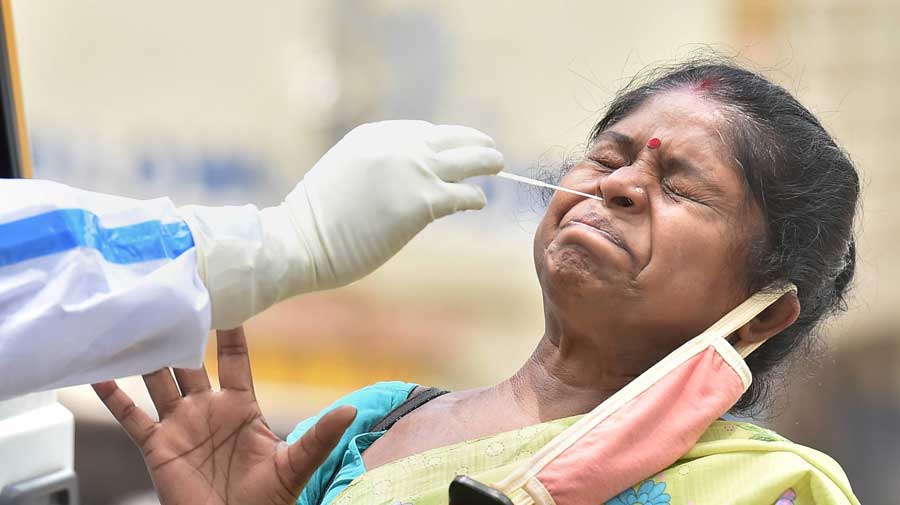 Bengal is among 13 states or Union territories performing less than 140 coronavirus disease tests per day per million population, a threshold set by the World Health Organisation for “comprehensive” testing, according to data released by the Union health ministry on Tuesday.

The health ministry said 22 states meet this numerical threshold for “comprehensive surveillance and testing of suspect cases”, releasing a list with Goa at the top with 1,058 tests per day per million population, followed by Delhi (978), Tripura (642), Tamil Nadu (563) and Jammu and Kashmir (540).

Bengal, Bihar, Gujarat, Telangana and Uttar Pradesh are among states where testing rates are below this threshold and less than India’s average of 201 tests per day per million population.

“The health ministry’s advice to states and (Union) territories has been to expand testing to meet this threshold set by the WHO,” said Rajesh Bhushan, officer-on-special duty in the ministry. “Increased testing will facilitate early detection and the treatment of cases.”

A WHO spokesperson told The Telegraph that the document Bhushan cited advises that countries should consider lifting public health and safety measures such as lockdowns if less than 5 per cent of samples are positive for Covid-19 for at least two weeks, assuming comprehensive surveillance put at one per 1,000 population per week. This, for India, translates into around 140 per million per day.

Although India has dramatically ramped up testing from less than 100 samples daily in early March to over 250,000 samples daily in July, health experts say significant differences in positivity — the number positive divided by the number tested — between states likely reflect testing patterns.

Health experts say low positivity could be explained through wide, large-scale testing and localised outbreaks, while high positivity could mean either narrow testing — where only the most likely patients are tested — or a large epidemic where most people tested turn out positive.

“Increased testing is important — we cannot do without it,” said T. Sundararaman, a community medicine specialist and former director of the National Health Systems Resource Centre, a unit of the health ministry. “Only through testing and isolation can we break the chains of transmission.”

But Sundararaman and others argue that such broad state-level testing rates are unlikely to help formulate localised strategies to address the epidemic.

The health ministry had said earlier this month that 49 districts account for over 80 per cent of the country’s Covid-19 cases.

Public health guidelines recommend a “test-track-treat” strategy that involves early testing to detect and isolate cases — either at home or in Covid-19 care centres — to prevent them from spreading their infection to others.

Community medicine experts concede that home isolation may not work in certain circumstances where asymptomatic persons may be compelled to work for economic reasons.

“There’s little we can do to avoid this, but even if a small fraction of those positive stay home or isolated, it could be better than them roaming about undetected,” John said.